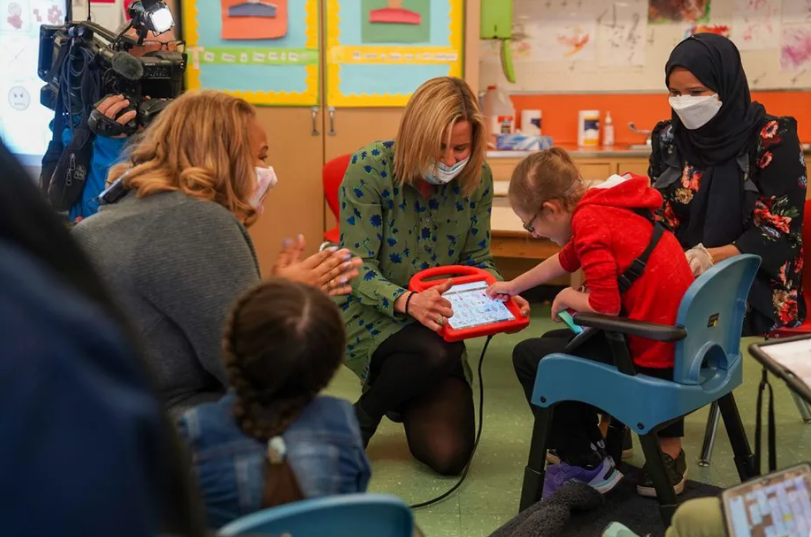 Parents may get another chance this school year to opt their children into in-person schooling, Mayor Bill de Blasio said Thursday.

De Blasio did not reveal dates for a possible opt-in period, but said that any relaxation of physical distancing guidelines from the U.S. Centers for Disease Control and Prevention would “absolutely be the reason” for a change since it would allow more students in classrooms. The agency is considering reducing distancing between children from 6 feet to 3 feet.

“We’re preparing for the possibility of a new opt-in for this current school year, but we need more information,” de Blasio told reporters. “We need to be really clear that we can do it in a healthy and safe way, but we have to start the preparation now.”

Allowing fully remote children to return to buildings would be welcome news for families who have been clamoring for the policy change — especially since many had chosen remote learning in the summer believing they would have another window this spring to change their mind.

The move, however, could bring yet another logistical hurdle for principals after a school year full of shifting guidelines that have forced many to reprogram schedules — sometimes several times.

With just three months of school left, it’s unclear how significant the demand will be for a new opt-in period. About 70% of New York City students are learning from home full-time — a percentage that rose as the school year wore on.

Before the school year began in this fall, city officials told families they would have the opportunity each quarter to switch from remote to in-person learning. (In-person families can switch to full-time remote learning at any time.)

But a few weeks into the school year, de Blasio and former Chancellor Richard Carranza walked back that promise, and gave families one final chance in November to opt in. The shift would provide more “stability for all students, for families, and educators,” Carranza said at the time. Many families — especially those who hoped to return in spring if coronavirus rates dropped — felt blindsided, and many principals felt their hands were tied, though anecdotally some said they were able to welcome back some students after the opt-in period had closed by getting approval from their superintendents.

The mayor has asked schools to provide five-day instruction to as many students as possible, and some schools are continuing to change their offerings to do so. That means that scheduling and teacher assignments have been a moving target all year.

As of next week, 83% of the city’s 1,600 schools are offering at least some of their students in-person instruction five days a week, according to Nathaniel Styer, a spokesperson for the education department.

Some principals hope they can bring back students without having to overhaul schedules again.

“We re-programmed our entire school over the February break to make reopening possible, so I don’t want to have to do a whole other reprogramming,” said Michael Perlberg, principal at M.S. 839 in Brooklyn, whose building reopened last month after middle schools were fully remote for three months. “But if we can bring kids in that really need and really want it without having to reprogram, I think that’s a no-brainer.”

About a dozen fully remote families have asked Perlberg for permission to return to the building. Parents of multilingual learners and those working full-time, such as in health care were especially caught off-guard by the city’s decision to cut off opt-in chances in the fall, Perlberg said.

“It’s been really frustrating to have to tell them, like, ‘No you can’t come back in person,’ when we do have a little room,” Perlberg said.

The roughly 180 students who are in person — about half of all the school’s population — are attending M.S. 839 four days a week, the principal said. Students are getting into a rhythm and are happy to be back, while staffers appear to be feeling safer as more become vaccinated. He believes he could maintain this schedule while accommodating up to 20 more students. But if schools are required to accept everyone who asks to come back, that could result in fewer in-person days for everyone because of safe social distancing rules, and Perlberg is not in favor of causing more disruption.

One Bronx elementary school principal, who was not authorized to speak to the press, said a new opt-in period could be a problem for her school, which recently moved nearly all of their in-person students — about 60% of their school — to five days of instruction a week. The school has a waitlist of about 10 students who would also like to attend in person.

Her school had been allowing children to sign up for in-person learning — despite the official policy — because they had the space to accommodate them and saw “the difference” that in-person learning made for most students, she said.

The principal said she could accommodate more students without disrupting the current schedule if space constraints are relaxed.

“If we’re maintaining the same constraints, and you want me to create a new classroom, it’s just not happening,” she said.

This article was originally posted on Easing the 6-foot distancing rule could bring more NYC students back to campuses this year, de Blasio says