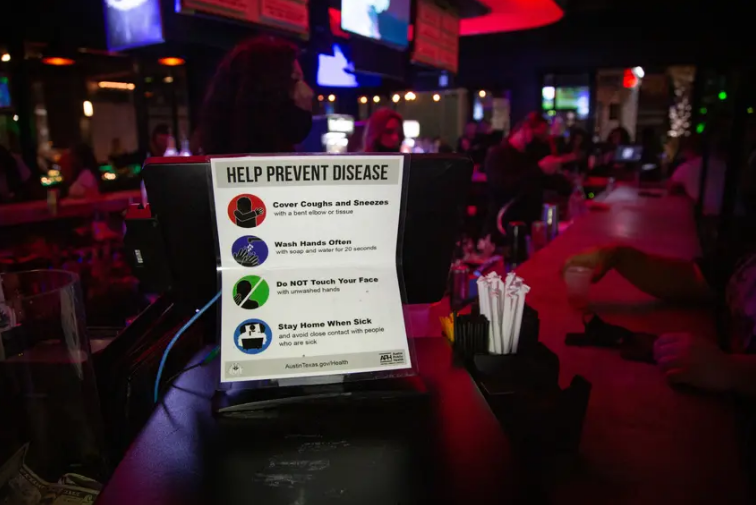 A year into the pandemic that has financially devastated businesses and millions of Texans, people are still applying for jobless benefits by the tens of thousands each week — and having trouble getting through to the Texas Workforce Commission.

Texas’ unemployment rate — the share of Texans in the labor force who are out of work — also slightly ticked up from 6.8% in January to 6.9% in February, according to federal data released Friday. In 12 months, Texas lost nearly 600,000 jobs, the third most of any state. Yet despite those seemingly gloomy figures, economic experts for the first time in months are predicting that Texas’ economic recovery might start gaining steam.

The reason for their optimism: the growing number of Texans who are getting vaccinated.

“It really is, do people feel safe or not, regardless of whether they’re required to wear a mask,” said Dietrich Vollrath, professor and chair of the Department of Economics at the University of Houston. “As people see the virus receding and as people get vaccinated, I expect economic activity to pick back up.”

That’s not to say that Texans — especially those looking for work or filing unemployment claims — will see immediate relief. The demand for vaccines is still outpacing supply, even as more Texans will become eligible to receive doses starting Monday.

And while some businesses are already seeing customers return, the numbers of people seeking unemployment aid surged in recent weeks to levels not seen since July. And many of them, like Jennifer Romeyn of Cypress, still face problems getting through to the state agency that’s weathered criticism for its lackluster responses to jobless Texans in the past year.

“To call it a nightmare, it’s really just an understatement,” said Romeyn, an emergency room coding services manager who has waited several weeks for unemployment benefits. “I just keep praying every day that this money is going to appear in my account.”

Gov. Greg Abbott allowed all businesses to reopen at 100% capacity and rescinded the statewide mask mandate as of March 10. But economic experts have long said that government restrictions alone won’t have much effect on the state’s economic activity. Instead, they say continued economic improvement will be largely dependent on the success of the vaccine distribution, a decline in COVID-19 cases and how comfortable people feel.

About 11.5% of Texans have been fully vaccinated, and COVID-19 cases, deaths and hospitalizations have generally decreased since the beginning of 2021. The Texas Department of State Health Services announced Tuesday that all Texans 16 and older will be eligible for the vaccine starting Monday, but some people in the state are still facing difficulties accessing the vaccine, especially people of color and Texans without reliable access to the internet or transportation.

Timothy Fitzgerald, an associate business economics professor at Texas Tech University, said industries like construction, manufacturing and hospitality have borne the brunt of the unemployment and uneven economic recovery. He’s said he’s optimistic that job growth in these industries will resume and economic growth in the state will continue in the coming months.

“The pace at which we emerge from the pandemic matters a lot, particularly for sectors like leisure and hospitality, education and health services,” Fitzgerald said. “As more people get vaccinated, some people may be more willing to go out and spend money … (because) they may just be more comfortable reengaging with the economy.”

A relief package and the winter storm

TWC spokesperson James Bernsen said the increase may be due to more people applying for benefits under the recent $1.9 trillion congressional relief package that extended jobless benefits.

“Anytime there’s any change, there’s a slight increase in the number of claims filed,” Bernsen said. “People who may have been previously ruled ineligible, they may refile. In some cases, they may be eligible, … (and) there are cases they might not be. You will usually see a slight increase in claims usually around a major event that is of interest in the news.”

Experts said the increase in claims could also be attributed to disruptions caused by last month’s deadly winter storm, which led to power and water outages across the state. But they expect the claims per week to decrease in future months assuming current vaccination and economic trends continue.

“All of the disruptions to water, electric and natural gas, public utilities, throughout Central and Eastern and … northern Texas, … It’s not clear how long those effects are going to linger, but I would expect a fairly sharp bounce back in terms of Texas payrolls next month,” said Tom Fullerton, an economics professor at The University of Texas at El Paso.

Romeyn, the Cypress health care administrative worker, said she lost her job on Feb. 12. She called the Texas Workforce Commission to file an unemployment claim on the same day. During the next several days, the winter storm made it much more difficult for her to find work and support her family.

“I was worried about being laid off and also about keeping a three-year-old alive during this extremely cold event with no electricity,” Romeyn said. “I couldn’t even get started on the work search because we didn’t have power or internet. So it definitely added an extra layer of stress on what was already a stressful situation.”

Weeks later, she still doesn’t know the status of her claim.

Romeyn said she has called the commission every day since she lost her job, but she hasn’t been able to access her account. She said she hasn’t received any benefits or income for seven weeks, so she is using her credit card to pay for groceries and support her son while she looks for a job.

“Obviously, I do have credit cards, but we don’t have unlimited credit cards,” she said. “There comes a point where things are gonna get dicey.”

Bernsen said the workforce commission is still seeing an unprecedented level of calls a year into the pandemic, although call levels are much lower than when they peaked in April 2020. He said people are now calling in with more complex problems, which take more time to solve than simpler questions that people asked early on during the pandemic.

“The large volume is dramatically in excess of anything we’ve dealt with in the past,” Bernsen said. “The system was not designed to handle that amount, so we’ve been trying to steer people to other ways of getting their problems resolved. … I can tell you that the average speed of answering calls is about half what it was just a couple months ago. So we’re seeing improvements.”

Some Texans, however, say they are seeing the impact of the gradual economic growth as people feel more comfortable returning to work or visiting places after getting vaccinated.

Michael VanSyckle, who owns Atomic Omelette and Grill in Corpus Christi, said it was difficult for his restaurant to survive during the early months of the pandemic. But after opening up to 70% capacity this month, he said he’s seen an increase in business largely due to an increase in vaccinations, the distribution of the $1,4000 stimulus and spring break vacations.

“People are relaxing and getting out more,” VanSyckle said. “We’re seeing guests that used to come in here all the time that we haven’t seen in the year, and we’re seeing a lot of new faces coming in.”

Robert Kaplan, the CEO and President of the Federal Reserve Bank of Dallas, said people’s comfort levels with venturing out more will likely rely on whether they feel safe as the pandemic persists, even if vaccinations are slowly rolling out.

Kaplan said that many Texans will only feel comfortable in businesses where other patrons are still wearing face masks, even though there’s no longer a statewide mandate that they be worn.

“It’s not what a state or federal government says,” Kaplan said. “It’s people making personal risk decisions about how safe they feel and whether it’s worth it to engage. Or is it better off just to wait and not take that risk? And that’s still, from what we can tell, the number one driver of business activity.”

And experts caution that Texans shouldn’t get complacent with coronavirus precautions. Health officials are urging people to get vaccinated and to continue wearing masks to keep the virus from spreading and prevent any variants from becoming widespread in the state.

“If one of these variants becomes a significant issue, and the vaccine doesn’t actually help with that, I think we’ll see the push to have more social distancing, more masking, maybe even some sort of quasi-shutdowns, but it’s gonna be really hard to undo what we’ve just been through after a year,” said Belinda Román, an assistant professor of economics at St. Mary’s University.

John Francois, an assistant economics professor at West Texas A&M University, said the hesitation of many people to frequent businesses after the lifting of the mask mandate and capacity restrictions is contributing to the effectively flat unemployment rate in the state. But as people feel more comfortable as vaccinations increase, he said the unemployment rate will improve.

“We are likely to start seeing a slow fall in the unemployment rate in Texas because of some of the things that are being done within the states like opening vaccinations to everyone,” Francois said. “Even though it was flat from January to February, we are likely going to start seeing a fall in the unemployment rate come April, May, June and perhaps the rest of the year.”