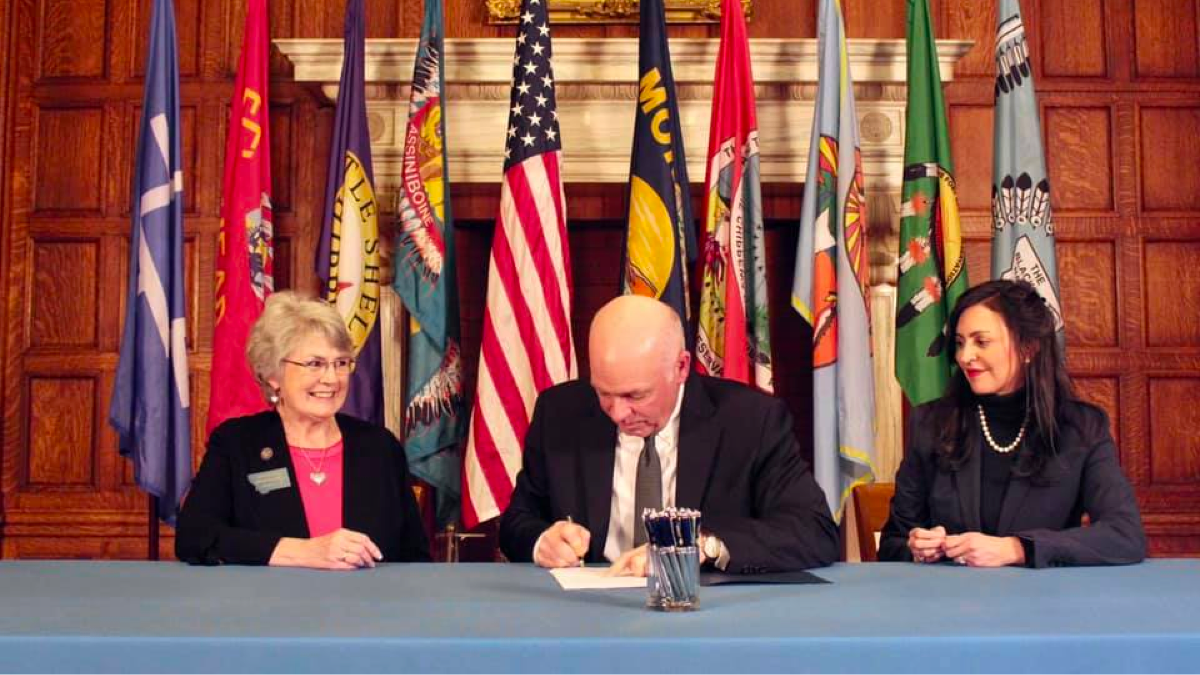 The 67th Montana Legislature concluded last week, but many of the new policies passed by lawmakers have yet to clear their final hurdle: winning the signature of Gov. Greg Gianforte. As of Monday, 65 bills were on the governor’s desk awaiting action, and roughly 175 more were headed that way. Gianforte does have the option to veto any measures he disagrees with, or he could opt in some cases not to act at all, in which case the bill will become law after 10 days. But over the next week, some of the most debated policy changes of the past four months will finally be settled with the stroke of a pen. Here’s a look at some of the major laws Gianforte has signed since the session ended. Montana Free Press will update this information.

Updated May 7: On Friday, Gianforte’s office announced that he’d signed House Bill 702 into law. The measure, which triggered considerable late-session controversy, declares that the withholding of goods, services or employment by private businesses or government agencies on the basis of vaccination status is illegal discrimination. An amendment added by Gianforte after the Legislature’s initial passage of HB 702 does exempt certain long-term care facilities from the law, and grants hospitals the ability to ask employees to volunteer their vaccination status and to implement additional safety protocols for unvaccinated staff.

Updated May 6: Gianforte signed two bills Thursday cutting Montana’s top income tax rate in the coming years in a ceremony at Thompson Precision Manufacturing in Kalispell. Senate Bill 159 cuts the marginal rate from 6.9% to 6.75% in 2022, reducing state tax collections by an estimated $30 million a year, and Senate Bill 399 reduces the rate further to 6.5% starting in 2024 as part of a broad-based rewrite of the state income tax code. SB 399 also eliminates several state tax credits starting next year. Gianforte has said the rate cuts will boost Montana’s economy by making the state a more attractive place to build businesses.

And during a signing ceremony Tuesday at Fort Benton’s Golden Triangle Brew Company, Gianforte officially signed a core tax policy component of his Montana Comeback Plan into law. The change, captured in House Bill 303, increases the state’s business equipment tax exemption from $100,000 to $300,000, which Gianforte said will save small businesses money and help stimulate local economies.

Montana will allocate hundreds of millions of dollars in federal COVID stimulus money to infrastructure programs through House Bill 632, which Gianforte signed Friday. The bill allocates $463 million for local water and sewer project grants, $119 million for state-owned building projects and $275 million to broadband connectivity projects. Specific awards will be made by the governor with input from advisory commissions.

Following a year of state and local governments taking rigorous measures to combat COVID-19, Republicans pushed hard this session to set up new guardrails around emergency powers. Gianforte green-lit several of those changes Friday, among them Senate Bill 185, which bars the governor from suspending any laws affecting Montanans’ constitutional rights. He also signed House Bill 429, meaning the governor can no longer suspend election laws without the consent of the Montana Legislature.

Montana will be committing more money to trade-based education at its three community college campuses in the coming years following Gianforte’s signing Friday of House Bill 67. The new law incentivizes enrollment in career and technical-ed courses by increasing the state funding community colleges receive based on those courses. Gianforte approved a companion bill as well, House Bill 179, which streamlines local funding sources for new community colleges down to a single levy subject to approval by voters.

One significant change to public K-12 education is a new requirement, established by Senate Bill 99, that schools must annually notify parents if their child is slated for sex education classes, and inform them of their right to withdraw their child from those classes. Similarly, any school events or assemblies involving human sexuality instruction require parental notification at least 48 hours in advance. Schools must also make all sex ed curriculum materials available for public inspection, and districts are barred from allowing health care providers that provide abortion services, such as Planned Parenthood, to provide students with any instruction or course materials on human sexuality or sexually transmitted diseases.

Updated May 7: Late this week, Gianforte signed a major policy shift impacting nuclear energy into law. House Bill 273 strikes a provision in law that says voters must sign off on nuclear energy developments and removes such development from the purview of the Major Facility Siting Act.

Three measures pertaining to how Fish, Wildlife and Parks manages predators were signed into law last Friday. House Bill 468 creates a spring hound hunting season for black bears, which will be followed by a chase season that will run until June 15. Senate Bill 314, which is aimed at significantly reducing the state’s wolf population, lifts bag limits for wolves and legalizes the use of bait and hunting at night on private land. And Senate Bill 337 changes how FWP handles grizzlies that come into conflict with people, preventing FWP wildlife managers from relocating problem grizzlies outside of zones already approved by the governor-appointed Fish and Wildlife Commission.

Bison management has been another big wildlife issue this session. House Bill 302 is now law, requiring county commissioners to sign off on wild bison relocations within their jurisdictions.

Gianforte also signed Senate Bill 358, which deals with water quality regulations. It strikes a statute that established defined limits on the amount of nutrients like nitrogen and phosphorus that can be present in waterways. In place of a numeric standard, the “narrative” water quality standard that was previously in effect will be restored.

Montanans wishing to change the sex designation on their birth certificate will now need to obtain surgery and a court order first. Gianforte signed Senate Bill 280 on Friday, reversing an administrative rule enacted under former Gov. Steve Bullock. The previous policy required only that a person fill out a form requesting the gender on their birth certificate be updated. The new policy, requiring a judge’s order and documentation of surgery, goes into effect immediately.

This article was originally posted on Final steps toward law