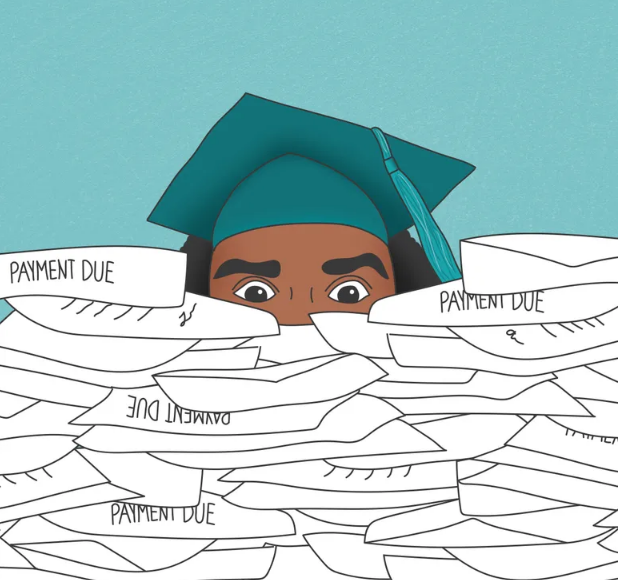 Every one of the about 44 million Americans with student loan debt has a story.

They range from people who took a few semesters of college but never graduated to those who hold advanced degrees. They followed the urging of teachers, guidance counselors, and parents who told them that a college education was the path to a better future. Some find their investment has more than paid off, while others struggle with even modest debt because they haven’t been able to translate their college experience into better wages.

The collective some $1.6 trillion owed by millions of American borrowers spans every age group but weighs most heavily on those in their 20s and 30s. While white borrowers hold more total debt, borrowers of color are some of the most burdened. Black borrowers owe on average double what their white peers owe four years after graduation.

President Joe Biden has called on Congress to cancel $10,000 in federal debt for each borrower. Some Democratic congressional leaders have pressed for $50,000. Biden has balked at forgiving that number, singling out borrowers who have high debt but went to elite colleges and have higher earning potential — which represent a relatively small number of borrowers. The Biden administration has sought other reforms, too, including canceling loan payments for those defrauded by private colleges.

So far, there’s been little mention of private loan forgiveness and it’s unclear whether the federal government could enforce that.

Chalkbeat Colorado interviewed five people from different walks of life to understand how student debt has shaped their lives and what relief would mean to them.

Broom, who needed to take out loans for college and is on the verge of earning her doctorate at the University of Denver, went to school to escape poverty. Racking up more than $280,000 in debt indeed will bring her higher earnings. Right now, she doesn’t have to pay her student loans. But the payments look like a hole she might never crawl out of.

It’s baffling for Broom that bettering yourself comes at such a price — she felt she needed education to get a better job to avoid the fate of so many in her neighborhood. Yet her debt forces her to scrape by.

The debt brings her to tears, especially after struggling as a first-generation college student. During her undergraduate years at Central Michigan University, she needed to help take care of her mom. She took out more loans to replace work and to ensure she could continue school full time. Like Broom, many students end up taking out loans just to cover living expenses.

“The only way for me, being a Black girl, to get out of Detroit, I felt like I needed to go to school and get in all this debt,” she said.

Broom said she wouldn’t be able to work in a higher-paying job without the years of schooling. But there is a flip side. Black student borrowers face the most severe challenges in paying back loans due in part to a widening wage gap between white and black employees. Black students are the most likely to default and are less likely to be able to pay back their loans.

Broom knows the research because her job at a nonprofit focuses on studying higher education policy. She sometimes dreams that someone will help her pay off her debt. In reality, even should the federal government offer $50,000 in debt relief, she still will be paying off her loan her entire life.

“I see higher education as an opportunity of advancement,” she said. ”But I almost feel like it’s a weapon that’s used against students of color.”

Lisa Jones could die before she pays off her student loans. She’s 63 with $77,000 in student loan debt.

“That just seems a dumb way to get out of a student loan,” Jones said. “It’s something I think about all the time. It weighs on me.”

Adults 60 and older hold much less student debt overall than do younger generations. The repayment of the loans, however, can feel just as insurmountable.

Jones, who lives in Denver, attended the University of Minnesota at age 43 to pursue master’s and doctoral degrees. She needed them to work with schools to evaluate how they serve students. She now works at a nonprofit helping school districts with student mental health. She loves the job. But it won’t make her rich.

Jones knows retirement waits around the corner. She has the energy to keep working well past 65, when many people begin to retire, she said. But she worries that when she hits 70 she won’t want to work as much.

When she does retire, she expects to carry a $440-a-month student loan repayment with her. That’s scary for someone who will have a fixed income. And it’s not like Jones has been irresponsible, she said. She’s worked hard, paid her bills, and budgeted.

“I pay attention to how much I spend,” Jones said. “I don’t go on extravagant trips or anything like that.”

She’s happy with the work she does and glad she earned her doctoral degree. But the debt feels like a punishment for expanding her knowledge and for choosing a job that helps others. She especially feels she shouldn’t be punished for not coming from a wealthy background.

“You’re telling me that the only people who should be able to go to college are those that have a lot of money and can pay cash for it?”

When Colorado-based for-profit Westwood College closed, Hernandez had $13,000 in debt for working toward a criminology degree. Without anything to show for her two semesters at the school, she could only find low-paying jobs.

The debt payments ate into her earnings. Some months she needed to choose paying one bill over another. Calls from collectors filled her phonemail. Her credit score tanked.

“I feel trapped,” Hernandez said. “I feel like I’m drowning.”

Borrowers like Hernandez, who take out college loans but don’t graduate, are three times more likely to default than borrowers who complete degrees. And most, like Hernandez, are saddled with crippling monthly payments and earn barely enough to make ends meet. Hernandez recently took a job as a medical worker, which boosted her pay.

Still, Hernandez hasn’t been able to move out of her dad’s house. She can’t afford her own car. The debt influences much of her life.

“Even though it’s not something you think about all day, every day, it’s definitely in the back of my mind,” Hernandez said.

Hernandez is determined to pay off the debt so she can return to college. Student loan forgiveness would jumpstart her life, enabling her to study nursing and help others.

Taking out student loans was supposed to be Hernandez’s way to improve her life. No one counseled her about cheaper degree options at a community college or the monthly payments she’d owe after school.

When Westwood closed, Hernandez felt as if she were living a nightmare.

“It’s sometimes crippling knowing that I’m chained up to something,” Hernandez said. “I don’t feel like I have the liberty to do as I please. Was this what my life was supposed to be like in the land of the free? I don’t feel free.”

No one ever taught Felipe Vieyra about the pitfalls of student loan debt — especially private loans.

To go to the University of Denver, Vieyra took out government and private loans. Even after paying off over $9,000 of the private loan over six years, his original balance of $11,000 had shot up to $14,000. It came as a shock.

The debt load caused worry and headaches even before he graduated. He worked construction during the summers to earn extra money and even considered the military to find a different route to pay his loans.

Sticking with school was the right choice, he said. But the struggles have been difficult. He once lived in a closet because he couldn’t afford anything else.

“The student debt was always in the back of my mind,” Vieyra said.

Student debt relief would ease his mind and open up possibilities, like maybe even buying a house, Vieyra said. He’s adamant that the federal government and the state should teach students about loan debt before they consider incurring it.

Colorado lawmakers are considering a financial literacy bill this year that would help students understand financial aid to attend school. Vieyra said it’s a crucial step because students don’t know enough about the cost of college, especially as prices continue to increase.

“We need young folks to understand what the consequences are,” he said.

Alissa Smith encountered many low points after graduating from the University of Montana during the height of the Great Recession.

She moved in with her mom in Minnesota because she couldn’t find a job. She worked at a cafe and could barely pay her bills, let alone make her student loan repayment.

“We were raised with this idea that if you work hard enough and you do all the right things, then you’re going to be successful,” Smith said. “There’s this deep shameful part of us if we don’t reach that.”

Even after she started working as an editor at a Colorado Springs newspaper, making the debt repayments involved hard choices.

One of the most embarrassing moments for Smith was the day she received an eviction notice on her door. She and her wife were hosting a Dungeons & Dragons party that day. Smith said she had delayed paying rent to cover living expenses and other bills, including a $150 student loan payment.

“Obviously I paid it and we weren’t evicted,” Smith said. “That was really embarrassing and frustrating.”

Smith has $30,000 in federal loans and her monthly payments have jumped to $240. She recently started a new, higher-paying job at a local nonprofit and hopes to encounter fewer low points. And she wants lawmakers to understand what student loan debt means to a person’s life.

“Those costs are different for everyone. And so even though $240 might not mean a lot to you,” she’d like to say to legislators or Congress members, “it matters so much to this 31-year-old lesbian living in an apartment with her wife and three cats.”