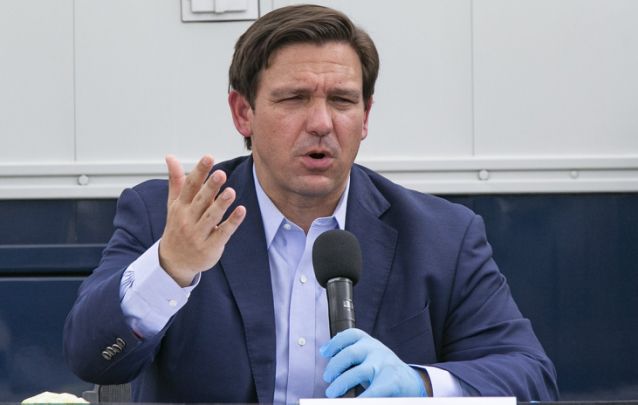 Florida receives a lot of undeserved grief. As a native Floridian, I’m proud to be from the Sunshine State. I’m proud of my beloved Tampa Bay teams who shocked the world this year. I’m even proud of all those viral “Florida man” news stories because they’re the product of Florida having strong government transparency laws.

I often brag about my home state’s booming economy and subsequent booming population, as businesses and residents flee reckless governments in places like New York and California. The combined trends of the nation’s economy increasingly powered by internet technology and the COVID-19 pandemic are causing folks to recognize they don’t have to live in cold and miserable places with wacky governments to earn a good living. This is a golden opportunity for Florida to become the nation’s leading finance and technology hub. Sadly, the anti-tech zeal that has swept over the Republican Party may have thrown this all away.

This week, Republican Gov. Ron DeSantis announced measures aimed at technology firms in the name of combating “censorship” of conservatives. There’s a lot to unpack here. First, there is still no evidence of deliberate, systemic anti-conservative bias by the major tech companies. Conservative voices do quite well online, routinely dominating the most viral posts shared on Facebook, accruing billions of views on YouTube, and racking up millions of followers on Twitter. Only after countless warnings and truly heinous actions do individuals and organizations find themselves in the position of losing a web hosting service like Parler did.

Then there’s the fact that under the First Amendment a private company not giving a platform to speakers they don’t like isn’t censorship. It’s actually the company exercising its own rights of speech and association. Censorship under U.S. law thus only occurs when the government imposes restrictions on freedom of speech, which is what Gov. DeSantis and his allies are attempting.

The proposals essentially force web services to host any and all speech, only giving users the right to opt-out of the things they do not wish to see. These must-carry provisions are fundamentally unconstitutional and echo of the Fairness Doctrine of decades ago, which, ironically enough, was used to silence conservative talk radio for a time. Conservatives are increasingly failing to realize in their ongoing war against tech that any precedents they set allowing the government to police speech can and will be used against them when the boot is on the other foot. Just ask the conservatives who were targeted by the IRS.

Another part of the package that spits in the face of the Constitution is that speech by political candidates would receive even greater protections than average users. DeSantis said, “if a technology company de-platforms a candidate for elected office in Florida during the election, a company will face a daily fine of $100,000 until the candidate’s access to the platform is restored again.” This is unconstitutional for all the reasons listed above, but is even more insulting considering that this proposed law explicitly favors the speech of candidates and political officials over regular citizens. The First Amendment is about protecting people from the government, not giving policymakers a special soapbox on private property.

Apart from the constitutional problems, must-carry provisions aren’t good for consumers or families. Most politicians do not have a grasp of the sheer volume of horrendous content, otherwise protected by the First Amendment, that is filtered out by the most popular web services such as Facebook. Big tech companies employ literal armies of people and expend huge fortunes combating the bombardment of objectionable material and spam. Do conservatives really want the default settings for the most popular web services to immediately display pornography, violence and foreign propaganda?

As is clear, these proposals don’t even pass the laugh test. They’ll undoubtedly be thrown out by the courts should they become law, but not until after Florida taxpayers are left to foot the bill for expensive litigation. However, just because these poorly considered policies won’t have a long stay on the books, that doesn’t mean their impact won’t reverberate for the long term.

That the highest levels of Florida’s government would even suggest such policies with a straight face tells potential investors everything they need to know about the growing risks of doing business in the state. It says that the government is more serious about populist posturing than serious governing. That’s a recipe for disaster for any business that suddenly finds themselves out of favor with a government willing to ignore the constitutional checks against it.