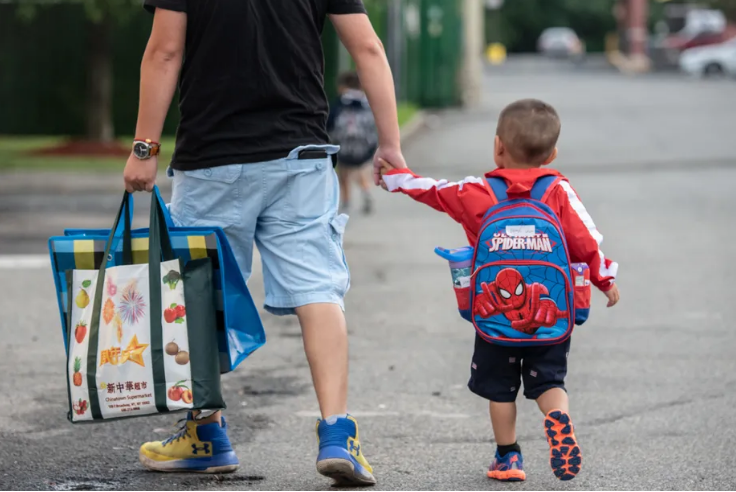 Flush with federal cash, NYC promises preschool for 3-year-olds in every school district

With an expected $4.5 billion in stimulus money headed for the nation’s largest school district, Mayor Bill de Blasio can now build on what has been the most popular and arguably most successful policy of his administration: universal pre-K. The city plans to add up to 16,500 seats for 3-year-olds in the 2021-22 school year, bringing enrollment up to 40,000 by this fall.

The latest expansion builds on what de Blasio started in 2014 with universal pre-K for 4-year-olds, quickly ramping up to enroll more than 60,000 just two years into his tenure. In 2017, he took a more gradual approach in launching 3-K for even younger students, promising to make space for all of the city’s 3-year-olds by 2021.

That goal was derailed by COVID-19, which wiped out more than $700 million from the city’s education budget and put the build-out of 3-K on hold. The price tag to reach universal preschool for 3-year-olds was originally projected to run nearly $400 million in city funds, with an additional $700 million from state and federal coffers.

Officials did not immediately say how much this fall’s expansion would cost, and what portion of the funds would come from city, state, or federal sources.

“This is a game changer for families,” Chancellor Meisha Porter said at a press conference. Families who enroll in the program are expected to save $10,000 in child care costs, she noted.

Preschool for 3-year-olds is already available in 12 of the city’s 32 school districts, and the city planned to add four districts this year using $1 billion in coronavirus reimbursement funds previously promised by the Biden administration. Unlike the city’s massive program for 4-year-olds, the expanded 3-K program will still not be “universal.” To serve every 3-year-old, the city estimates it would need around 60,000 slots.

“This is an important and good use of federal stimulus funds, and a recognition that childcare is an essential part of recovery,” said Gregory Brender, director of public policy at the Day Care Council of New York, which represents providers.

Leaning on one-time federal funds for such a massive expansion raises questions about how — and whether — the city will be able to sustain the program. But de Blasio seems to be counting on its popularity with parents to bet that future elected officials will find a way to continue paying for it. Bi-partisan support for early childhood education has only grown in recent years. President Joe Biden is reportedly eyeing another spending package that calls for universal pre-K.

The mayor is deciding to expand 3-K over many other pressing and competing needs.

Advocates for children with disabilities have been quick to point out that those students have consistently been left behind the mayor’s promises to make preschool universal. The city has regularly fallen short by hundreds, and sometimes thousands, of seats in special education pre-K classrooms, forcing students to go without instruction and legally required services such as speech or physical therapy. Part of the shortfall is due to stagnant funding from the state, resulting in the closure of many programs serving children with  disabilities.

“We have heard from families desperate for help because their children with autism or other complex disabilities were going without appropriate services because there were no available seats in the type of class they needed,” the nonprofit Advocates for Children noted in a statement. “Yet, the mayor’s announcement today will do nothing to help these children.”

Providers of these special education pre-K programs also say it’s difficult to recruit and keep teachers because they make far less than their counterparts in programs serving general education students. Those teachers have been left out of deals struck to raise pay for other educations in privately run but publicly funded programs — which make up the bulk of the city’s free seats.

“We want to reach every child in every way but that will take some time to put the pieces together,” de Blasio said about the gap for preschoolers with disabilities. “There’s lots of choices to make, always, within a budget.”

For some in the early childhood sector, the decision to double-down on universal pre-K raises questions about whether the expansion will come at the expense of seats for infants and toddlers in the city. Programs for the youngest children are the most expensive to run, and without enrollment of older students to offset costs, seats for babies can become unaffordable for programs to maintain. Others believe the city would be better off funding extended care in existing preschool programs, beyond the school day and year, for needy families.

Lack of childcare has become a major burden for families while the health crisis drags on, forcing many women out of the workforce. Having toddlers doing school on screens — whether families opted for fully remote or hybrid schedules —and the uncertainty for in-person learning because of frequent coronavirus-related building closures have also hurt working families. Pre-K enrollment was down more than other grades this year, with 13% fewer students, according to city data.

In a note to providers announcing the 3-K expansion, city officials acknowledged the need to get more children in classrooms to help working families.

“Access to the essential child care and early education services you provide is a critical component of getting families back to work and putting New York City on the path to recovery from the pandemic,” the notice said.

This article was originally posted on Flush with federal cash, NYC promises preschool for 3-year-olds in every school district