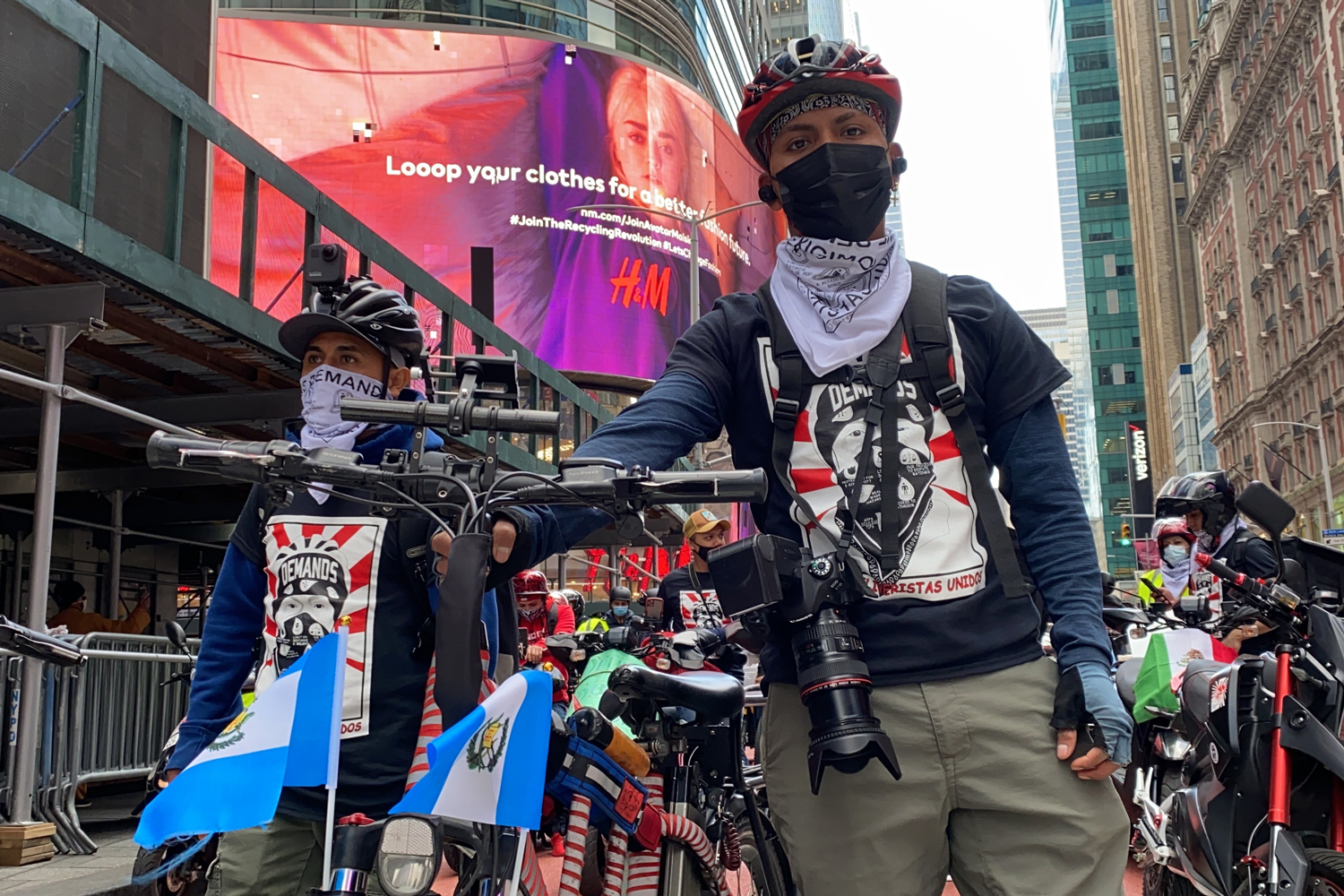 Burdened food delivery workers could get relief from upcoming City Council bills that aim to open doors to restaurant restrooms and let them set limits on where they’ll deliver.

Among the bills, which also include measures to boost wages and ensure tips get to workers, is a highly anticipated proposal by Rivera that would fine restaurants and bars that refuse to allow a delivery worker to use the restroom — charging $50 for the first offense and $100 for every subsequent violation.

“They deserve to be treated with respect, public health crisis or not — and that includes access to basic amenities like a bathroom while on the job, just like every other worker in the city,” Rivera told THE CITY.

The Deliveristas, most of whom are Indigenous Mexican and Central Americans, have complained for months about restaurant managers denying bathroom access, as the pandemic intensified takeout demand and sharply limited other restroom options.

Some workers have told THE CITY they’ve at times been forced to travel back to their homes in the middle of shifts to relieve themselves, potentially losing hours of work.

Preliminary data from the Worker Institute at Cornell University found that 67% of delivery workers in the city were denied bathroom access by restaurants in the past year, according to a survey of more than 500 food deliverers who use apps such as DoorDash.

Thousands of them took to the streets last Wednesday to demand bathroom access, along with other basic workplace protections, newly gaining support from powerhouse service workers’ union SEIU 32BJ.

A Deliverista who asked to be identified as Pedro said he’s been denied bathroom access “every day” on the job making deliveries for DoorDash in Chelsea since he started a year ago.

“I ask the restaurants when I’m picking up an order, to go to the bathroom, wash my hands, relieve myself and they tell me it’s for customers only,” the 29-year-old told THE CITY in Spanish. “And I’m like, really? Don’t I count? Who’s the one making sure your customer gets the food?”

The city Department of Consumer and Worker Protection would be in charge of developing rules and enforcing the bathroom measure if passed, under a draft bill reviewed by THE CITY.

A Department of Consumer and Worker Protection spokesperson said the agency would review the bill once it’s introduced.

One of the bills, sponsored by Brannan and Menchaca, would allow delivery workers to set limits on how far they’re willing to travel for a delivery — and to select which routes they want to take to get there without fear that their rating on the apps will decrease.

Many delivery workers who rely on pedal or e-bikes have told THE CITY they often have mere minutes to deliver meals to their destination before they’re penalized by consumers or the apps, which can downgrade their ratings.

That model, they argue, promotes unsafe speed over safety on the streets.

The measure seeks to prohibit third-party food delivery services from imposing “any negative consequence” — specifically including downgrading a delivery person’s rating or limiting their access to the app or pickups — if a worker turns down an order because of the location or if they chose an alternate route to their destination.

In a statement, food app platform DoorDash said the company is “actively engaged with the Dasher community and eager to engage with policymakers on ways all stakeholders can better support New York City delivery workers.”

A company spokeswoman pointed to pledges DoorDash made in December that it would alert delivery workers to available bathrooms and offer them “free and discounted” road safety equipment.

Uber Eats, another major platform, was not available for comment.

Brannan’s district includes Bensonhurst, where many of the workers live in “Pequeña Guate,” or little Guatemala. He said these bills would “help secure some basic protections and benefits for the deliveristas” who are some of the “least protected” workers in the city.

“There is still much to be done, but this is a great start. We can show our gratitude for these workers by getting these bills passed. We need to make sure essential workers remain visible after the pandemic,” he said. “After all, what would our city do without them?”

An additional bill to be introduced by Councilmember Brad Lander (D-Brooklyn), who is running for city comptroller, would establish minimum per-trip payments for delivery workers, similar to protections that the city’s Uber and Lyft drivers already have in place.

“Throughout the pandemic delivery workers have been feeding us, but the app companies have been starving them —in so many cases, Deliveristas earn far less than the minimum wage, even though they perform very dangerous essential work,” Lander told THE CITY. “These sets of rules would require Doordash, Instacart and all these companies to pay workers on a per-trip basis, so we can make sure these workers earn a living wage.”

And a proposal from Brannan would require third-party food delivery companies to provide insulated bags at no cost to workers.

Delivery workers have complained that the thermal bags — often emblazoned with company logos — are an unofficial requirement for the job to keep food hot during deliveries, costing them as much as $120.

Another Menchaca bill would require apps to pay workers on a weekly basis and prohibit charging any fees in order to receive payment.

“We as a city would be able to finally bring fines against and regulate these apps,” Menchaca said of his proposal.

A bill introduced by Chin in early 2020 would require that food delivery apps disclose to customers what portion of their tip is distributed to workers, how the tip is paid to them and what amount of each tip is used to make up workers base pay.

Rivera began meeting with the Deliveristas to discuss the bathroom issue in late October, shortly after the workers staged their first major protest.

“We’ve been working on this issue for a while because I think it is pretty clear that delivery workers are essential workers: for over a year, they put their lives at risk to provide for their families and keep New Yorkers fed throughout the pandemic,” Rivera said.

THE CITY first reported in December that staff at many of the restaurants the Deliveristas kept afloat throughout the pandemic refused access to bathrooms and sometimes made them feel unwelcome.

Following THE CITY’s reporting, the major trade group that represents the city’s bars, restaurants and hotels said it would “strongly encourage” members to provide bathroom access to third-party delivery workers.

“Delivery workers have been essential, and it’s a shame that the city’s failure to provide a network of public restrooms necessitates a law mandating small businesses let people they don’t employ use their facilities,” Rigie said in a statement Monday. “But, when you have to go, you have to go, and it’s a reasonable request so long as adequate protocols are in place to help ensure there isn’t an unnecessary disturbance to a restaurant’s operations.”

In December, DoorDash pledged to work with more than 200 of its “restaurant partners” to ensure bathroom access to “Dashers,” in light of THE CITY’s reporting.

If passed, Rivera’s  measure, aimed at all app-based delivery workers in the city, would mark “a major first step” to better conditions for the Deliveristas, said Ligia Guallpa, executive director of the Workers Justice Project.

Guallpa said she hopes that “other elected officials and the city will start embracing and recognizing that the whole city needs to react and reevaluate every infrastructure that impacts the lives of delivery workers.”

Under the bathroom measure, restaurants and other eateries would have to provide access if requested to app workers who are making a delivery from that restaurant. Workers not actively picking up an order at the establishment could still be refused access.

“This is a great thing for us,” said Adán Pérez, who delivers for DoorDash in Chelsea and Hell’s Kitchen, speaking in Spanish. “It gives us confidence that our voices are being heard, that we are worthy of respect as essential workers.”

Eateries with restrooms that can only be accessed through the kitchen — as is the case in many pizzerias — could be exempted from the requirement, according to the draft reviewed by THE CITY.

“I think that some of the restaurant owners that have been very, very hesitant in making sure that this was an amenity that was provided to the Deliveristas,” she added. “But I think that when you see thousands of workers in the streets, most of them workers of color and immigrant New Yorkers, who feel like they’re being denied what is just kind of basic humanity — I hope that they will join what I feel is an important step towards workers’ rights.”