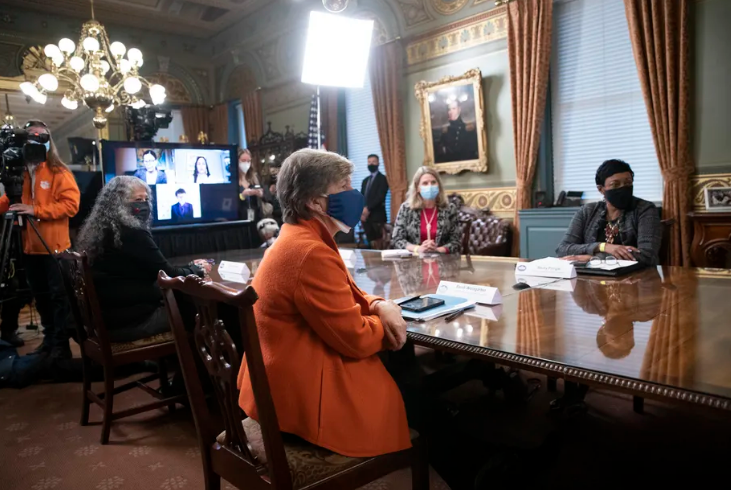 In what the union billed as a “landmark” speech, American Federation of Teachers President Randi Weingarten on Thursday strongly called for fully opening school buildings next school year for instruction five days a week.

“We can and we must reopen schools in the fall for in-person teaching, learning and support. And we must keep them open — fully and safely 5 days a week,” Weingarten said in a speech streamed online.

The comments were notable in light of the hesitancy of many teachers and their unions to return to school buildings for much of this year. Still, the significance of Thursday’s speech is uncertain. Many districts — including New York City, home to AFT’s largest local chapter — were already gearing up for a full reopening in the fall.

New York City did open its school buildings earlier than many large districts, but after negotiations with the union it delayed the start date twice and largely offered part-time in-person schooling.

Since President Biden entered office and the vaccine has become available, more and more schools have opened their doors — the vast majority of school systems are now offering some form of in-person instruction. But in many cases, it remains part time or teachers must try to teach students virtually at the same time.

Weingarten says this must end. “This juggling act requires teachers to essentially teach two classes, in two different modalities—one with kids in a classroom, and one with kids online, at the same time,” she said. “Unless there’s a compelling reason, it’s not just untenable and unsustainable, it’s educationally disastrous.”

One challenge, which Weingarten acknowledged, is convincing parents and families that it is safe to send their kids back to school. Many parents have supported unions’ cautious approach to reopening this year, and even as school buildings have opened up, many children have stayed remote, particularly children of color. Weingarten said AFT would launch a $5 million back-to-school campaign, which will include “reach[ing] out to families and communities about the value of children returning to school in-person.”

Weingarten also called for maintaining three feet social distancing requirements for students, which might require more teachers and smaller class sizes. “For the most part, this will mean fewer students in each class — effectively aligning health and pedagogical best practices,” she said. That would help the union grow its membership, and Weingarten argued that this would help students academically too.

The AFT’s is the country’s second largest teachers union with about 1.6 million members. The largest, the National Education Association, which claims nearly twice as many members, has taken a notably different public relations tack. While Weingarten has blanketed media for months, NEA President Becky Pringle has kept a lower profile.

In a statement Thursday, Pringle appeared to back Weingarten’s comments. “NEA supports school buildings being open to students for in-person instruction in the fall,” she said. “Educators will continue to lead in making sure each school has what it needs to fully re-open in a safe and just way “