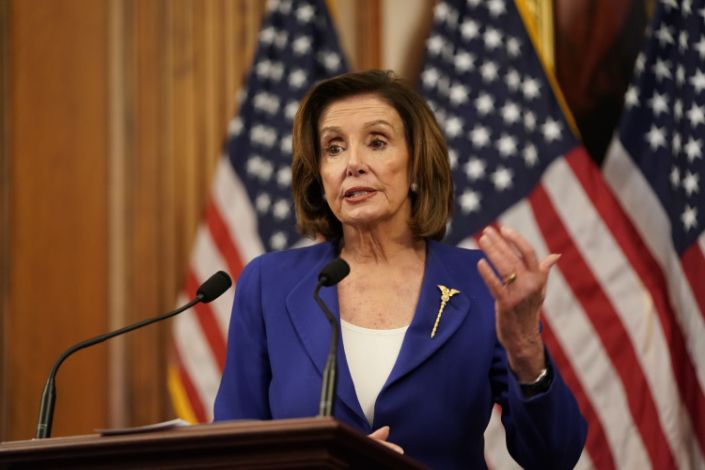 The Democrats’ $1.9 trillion emergency relief bill – which is up for a vote Friday – includes a slew of bailout money for state governments unrelated to the pandemic, opponents say.

Under the guise of COVID-19 relief money, U.S. Rep. Jason Smith, R-Mo., told Fox News the bill “is more the pretext than the purpose behind what Democrats are proposing. Their approach is the wrong plan, at the wrong time, for all the wrong reasons.”

It also provides $473 billion in cash payments to individuals, $1,400 for those who earn less than $75,000 per year, an additional $400 in federal weekly unemployment benefits, and raises the federal minimum wage to $15 per hour.

It also allocates $75 billion in cash for vaccines, $26 billion to restaurants, $15 billion to help fund airline payrolls, and an additional $7.2 billion to the controversial Paycheck Protection Program, which came under scrutiny in the last round of funding.

The Wall Street Journal editorial board estimates that of the entire $1.9 trillion proposed, about $825 billion – or less than half – is directly related to COVID-19 relief. The majority of funds is dedicated to “expansions of progressive programs, pork, and unrelated policy changes.”

Democrats are expected to pass the measure today, House Speaker Nancy Pelosi, D-Calif., said. The plan is to use the Byrd Rule to allow a majority party to approve a bill with a simple majority of 51 votes instead of 60 in the U.S. Senate.

House Minority Whip Rep. Steve Scalise, R-La., blasted the bill, arguing, “It’s clear Democrats have no interest in approaching COVID relief in a timely and targeted fashion and are instead using the reconciliation process to jam through their liberal wish list agenda.”

“Less than 1% of the COVID relief bill will actually go to vaccine development and distribution. When a top priority accounts for such a small part of the overall spending, it just shows how massive (and unnecessarily bloated) this spending bill is,” Rep. Nicole Malliotakis, R-New York, tweeted.

Adam Andrzejewski, founder of the advocacy group, Open The Books, argues most of what is in the bill is not emergency spending and is a waste of taxpayer money. Last year, Congress already allocated nearly $4 trillion in taxpayer money for items not classified as emergencies, including $1.4 billion sent to dead people.

Open the Books auditors identified $470 million in the bill allocated to The Institute of Museum and Library Services and the National Endowment of the Arts and the Humanities, doubling their budgets.

Also not considered emergency funding, Andrzejewski notes, is the $200 million allocated to The Institute of Museum and Library Services, whose budget in fiscal 2019 was $230 million.

The $350 billion allocated to bail out all 50 state governments and the District of Columbia, he argues, benefit poorly run Democratic states over better run Republican states. The bill uses a formula based on unemployment rates for the fourth quarter of 2020 to allocate payment to states.

States like New York and California with the strictest lockdown policies and highest unemployment will receive more bailout money than states like Florida and South Dakota, which are open for business.

The proposed total spending, Chris Edwards, economist at the Cato Institute, told the Center Square, is adding a massive amount of debt burden on Americans.

“Congress passed $3.5 trillion in COVID-related relief in 2020, which is a massive $27,000 per U.S. household,” he said. “Relief bills have raised federal debt by $3.5 trillion, which are costs pushed forward to land on young Americans in the future and reduce their living standards.”

The ongoing debt burden created by Congress, he says, is “unfair because future generations will have their own costly disasters to deal with. They will have to pay the costs of their own disasters in addition to the massive costs in the form of debt and interest payments that prior congresses have loaded onto them.”