Home » In Chicago, parent fundraising eases reopening at some schools — and leaves others out 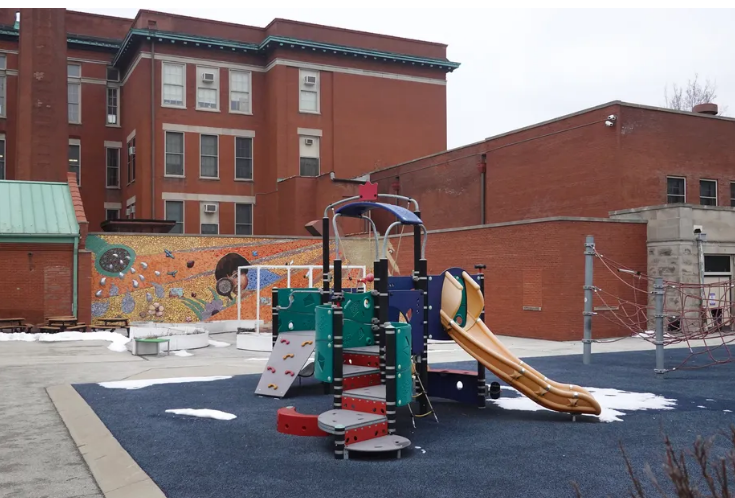 In Chicago, parent fundraising eases reopening at some schools — and leaves others out

Teachers at the newly renamed Harriet Tubman IB World School in Lincoln Park would be teaching students both online and in person at the same time, but the school didn’t have money for stands and additional screens. Lenkov, a parent, helped plan a fundraiser to get second monitors and tripods for teachers.

“There are a lot of things that our school needs that [Chicago Public Schools] can’t provide,” she said.

An effort like that would be welcome at Hyde Park Academy High School, on Chicago’s South Side, where many families have found their incomes destabilized by the pandemic, even as their children’s at-home technology needs have skyrocketed.

But school community members, often just focused on meeting their basic needs, haven’t had the capacity to launch a virtual fundraising drive. “We don’t necessarily have lots of access to personal wealth that can subsidize our students’ needs,” said Maira Khwaja, a member of Hyde Park’s Local School Council. “That shouldn’t have to be up to our families.”

The difference between these two schools? The Lincoln Park elementary has a Friends Of group, a legally independent nonprofit whose main purpose is fundraising for field trips, staff positions or building needs at Chicago schools. Hyde Park doesn’t.

In Chicago, as in other cities, parent fundraising fills in critical gaps at some schools and not others. That dynamic in a city deeply segregated by race and wealth has long contributed to the inequalities among schools — and for the last year, amid a pandemic, the divide has become increasingly apparent as some schools tap into those outside resources to purchase additional safety equipment or remote learning technology.

Out of 513 district-run Chicago Public Schools, an analysis by Chalkbeat found that at least 100 schools had Friends Of groups, with the majority concentrated on the city’s whiter and wealthier North Side. Some schools in the South Loop, Mt. Greenwood and other areas also have them. Because Chicago Public Schools doesn’t keep a centralized list of the groups and how much they raise, or account for their fundraising when it determines school-level budgeting, their influence within the school system can be hard to pin down.

The Friends Of group at Beaubien Elementary School, in Jefferson Park, gave each classroom $250 to spend on cleaning supplies ahead of school reopening this spring. Friends of Palmer, a parent group supporting the Mayfair neighborhood elementary school, raised $2,900 to fund extra protective equipment to support school reopening, including desk shields for students. And the Friends Of group at Lyman A. Budlong Public School, in the Lincoln Square neighborhood, contributed $6,000, plus funds from last year, to pay for 60 Chromebooks for students to supplement the district’s technology outreach efforts (which sometimes moved slowly or gave kids lower quality devices) and to buy software to help teachers use Google classrooms.

“This year has just looked very different,” Mary Harris, president of Friends of Budlong, said. It has prompted the parents to rethink their own mission. The group is considering a plan to launch a community pantry to offer basic hygiene and food products. “People are hurting and struggling, so changing the way we do some things has been important.”

Parent organizing to fill district funding gaps isn’t new in Chicago Public Schools, said David Stovall, an education professor at the University of Illinois at Chicago. Friends Of groups became more common in Chicago in the 1960s, he said, when white families, in response to more Black and Latino families moving into their neighborhoods, moved their children to magnet schools or to other schools outside of the areas in which they lived. They started Friends Of groups to support those schools, both meeting some needs in a chronically underfunded school district and further widening the divide between have and have-not schools.

Despite its size and $7 billion budget, Chicago Public Schools faces chronic debt and pension costs, which means money gets siphoned away from classrooms each year to pay legacy bills. In the state’s accounting system, it’s not considered a fully funded school district: A 2020 approximation from the school district estimated that it would need about $5,000 more per student to properly serve student needs. Chicago divides its federal, state and local funds to about $12,000 per pupil, but factoring in broader education costs, individual schools receive between $4,600 and $5,700 per student, with more included depending on student needs.

Such budget pressures have meant that, historically, schools have had to cast a wide net to fund extras or go without. Parent fundraising to pay for art and music teachers already was the norm in some schools, but in the coronavirus pandemic, such fundraising continues to give schools critical advantages.

Friends of Blaine, an elementary school near Wrigleyville, brought in $382,660 in income in 2019, the last year for which tax records were available. In the same year, Friends of Coonley, in North Center, reported $687,032 in income, while the Friends Of group at a selective-enrollment high school, Walter Payton College Preparatory High School, raised $713,750 in income.

The district said it considers the Friends Of groups independent of school communities, and it does not take private fundraising into consideration when weighing school investments.

“The district … does not view independent school fundraising efforts as a zero-sum proposition,” spokesperson Emily Bolton said in a statement. “The district consistently prioritizes schools in lower-income communities for programmatic investments, grant opportunities and additional support from private donations.”

Now, as the federal government recently passed the largest-ever federal outlay on K-12 education in U.S. history, Chicago Public Schools will have an unexpected windfall of funds and until 2024 to dole them out.

But without considering what other resources communities have to support students, critics say that money won’t help address the endemic inequalities in Chicago schools.

Some school districts have tried to write in rules to create transparency around outside fundraising. In New York City, the city council passed a bill in 2018 requiring the Department of Education to publish an annual report on how much each parent-teacher association or parent association raises. In the Santa Monica-Malibu school system, parents can donate directly to their schools if it’s to beautify the campus or sponsor field trips. But if parents want to pay for teachers’ salaries or school-day programs, they also must donate to another pool of money that’s then redistributed to needier schools. And in Portland, a central foundation collects one-third of the proceeds any school raises above $10,000. So for every dollar past that mark, 33 cents go toward equity grants that are delivered to the district’s under-resourced schools.

Stovall said Chicago, too, would be better served by considering which schools are able to bring in hundreds of thousands of dollars of private donations each year.

“What they have essentially done is created another string of revenue that schools on the South and West sides will never have access to,” he said. That only deepens a dynamic where schools in which people already have more financial stability, like those that have Friends Of groups, are able to increase access to extra money, while those in which many families are living paycheck-to-paycheck don’t have the time or extra cash to fundraise, he said.

Some school communities that have been hard hit by COVID-19 have found other ways to deploy the work of their Friends Of groups.

Friends of Theodore Roosevelt High School, in Albany Park, organized free online cooking classes, called the Roosevelt Dinner Club, to offer students and families a place to meet, and in doing so fulfilled another urgent need for its remote high schoolers: connection.

Lauren Sivak, president of Friends of Roosevelt, said the group was trying to think about how to leverage the talents of their members, one of whom was a sous chef at several highly rated restaurants. They came up with the idea of cooking with families over Zoom, and more than 20 families participated. “The mental health pressure that young people and their families are facing is unprecedented,” she said.

For Friends of Bulldogs, at Tubman school, that has meant pivoting from fundraisers that paid to retain staff to getting functional Chromebooks for students and starting a special assistance fund to help families with basic needs like rent support.

School communities have been resourceful and creative in trying to meet the additional needs of families this year. School-based mutual aid groups have grown to meet family needs for rent or healthcare expenses, and individual teachers have used GoFundMe or Donor’s Choose to build pop-up food pantries and run coat drives.

Jhoanna Maldonado, a Chicago Teachers Union organizer who was formerly a teacher at Richard Yates Elementary School in Humboldt Park, said her school weighed starting a Friends Of group, but they dropped the idea after learning they would need to hire a lawyer to set up a nonprofit and pay legal fees.

Now, Maldonado works with the union as an organizer supporting the Sustainable Community Schools program, an effort that came out of a 2015 hunger strike to save Dyett High School in Washington Park from closure. The program provides financial and organizational support to a handful of Chicago schools as per the union’s contract agreement. For her, giving communities a voice in how extra money is distributed is key, and it was one of the reasons the Yates community moved away from creating a Friends Of group.

At the March board of education meeting, a student from Marie Sklodowska Curie Metropolitan High School on the Southwest side, spoke passionately in the public comment section about her school’s need for more mental health support. She demanded those come from the district because her school doesn’t have access to private fundraising. “In my years of CPS I’ve never seen money being used effectively on us, instead I see it being used effectively on metal detectors and cameras,” Reina Torres, who also organizes with youth group Good Kids Mad City, said.

She wants her school to have a mental health room for students to go to a calm place while in school and easier access to counselors. “Schools from the North Side have private donors. We have to understand that schools on the South Side don’t have private donors,” Torres said.

This article was originally posted on In Chicago, parent fundraising eases reopening at some schools — and leaves others out