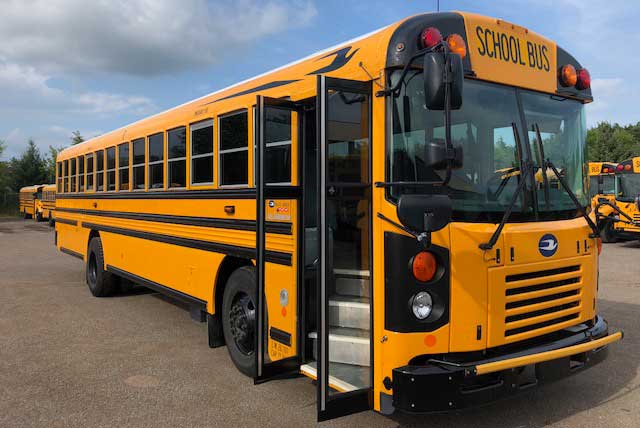 A seemingly uncontroversial bipartisan bill that would solicit ideas to make school transportation and facilities more efficient turned into a clash between the legislature and school districts at a hearing this week.

The idea is so nascent, the bill’s author said it is unclear what proposals it might elicit. The bill does not specify what efficiencies it is seeking. It calls for ideas for creating new structures for managing transportation or building operations, and one possibility mentioned in the House is that neighboring districts could share bus services.

But education lobbyists and district officials from across Indiana bristled, seeing the bill as a way to leave schools out of financial conversations or force them to consolidate or outsource services. The proposal also struck them as the state trying to stick schools with the bill for increasing teacher pay.

“Where’s the evidence that this will have any benefit whatsoever?” asked Terry Spradlin, executive director of the Indiana School Boards Association, at a hearing Wednesday. “This bill really cuts us out of having input. … It seems to jump ahead to make this conclusion that privatization is the solution here.”

The Senate Education and Career Development Committee held public comment on the bill Wednesday but has not yet scheduled a vote.

Rep. Edward Clere, R-New Albany, wrote the bill with members from both parties signing on.

A Democratic co-sponsor in the Senate seemed bewildered by the sudden backlash to the bill, which sailed through the House, passing by a vote of 87 to 1.

“What changed from one chamber to the next?” asked Sen. Eddie Melton, D-Gary. “I sincerely want to know.”

Opponents said they did not speak out against it sooner because it did not draw their attention.

Lawmakers and speakers also criticized the first sentence of the bill, which said it aimed to “improve the efficiency of school services and increase dollars to teachers.”

School districts typically pay for teacher salaries and other instructional expenses from their education funds, which come from the state. Operations funds, which pay for busing and facilities, come from local property taxes.

The bill raises the prospect that the state may ask districts to draw on local tax dollars to pay teachers, said Oliver Barie, a lobbyist representing the Northeast Indiana Public School Advocacy Consortium, who said that could be a “slippery slope.”

Democratic lawmakers pointed out that while Gov. Eric Holcomb’s teacher pay commission called for the state to substantially increase teacher pay, the Republican-controlled legislature has done little to follow those recommendations.

Supporters of the bill, however, contended that for Indiana to increase average salaries for educators, local districts must also redirect money to classrooms.

“At the end of the day, if we follow the teacher pay commission, by its merits, school districts should be looking for ways to create efficiencies,” said Committee Chairman Jeff Raatz, R-Centerville.

Lawmakers who back the bill said they were flummoxed that it was controversial.

The state has hundreds of school districts, and some of them must be less efficient than they could be, said Sen. Scott Baldwin, R-Noblesville.

“I’m trying to resolve in my mind why there would be pushback in any form at all, to a way to save money that would help children,” Baldwin said.

Sen. Shelli Yoder, D-Bloomington, attributed the vocal opposition to the seemingly innocuous bill to a breakdown in trust.

“We’ve chipped away at the trust that our local schools and the teachers have of this body,” Yoder said. “We have a track record of doing something that seems relatively minor or innocent and then the repercussions of that are really major.

“At the end of the day, so many of our schools are feeling like they’ve become an enemy of this legislature,” she added.