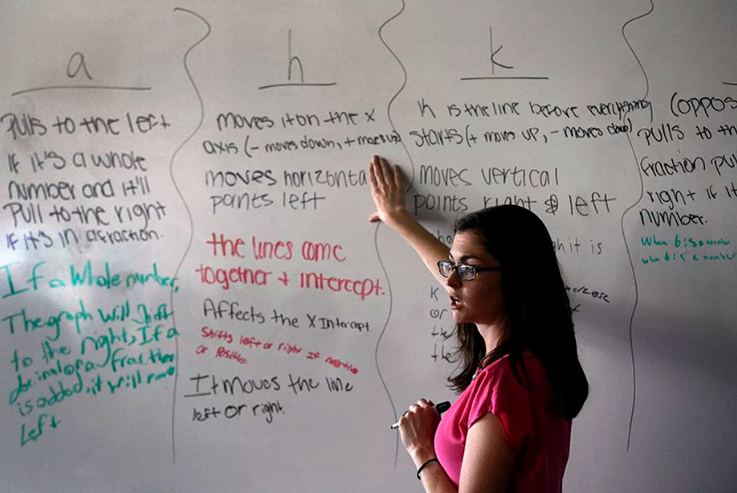 Only 1 in 6 students who pursued bachelor’s degrees in education at state colleges and universities ended up working as teachers, according to a new report on Indiana’s teacher pipeline that followed students who entered college from 2010 to 2012.

The outcomes were even starker among students of color: Just 5% of Black students who entered education programs went into teaching in Indiana classrooms, according to the study from the Institute of Education Sciences, the research arm of the U.S. Department of Education.

The report followed students enrolled in education programs at Indiana’s public colleges and universities to see how many received degrees, were licensed, and got jobs in teaching.

Indiana schools have struggled to fill vacancies in recent years as a strong economy created jobs in other industries. Teacher pay in Indiana lags behind that of neighboring states and behind salaries of other professional careers — a problem that has attracted attention from politicians and advocates on both sides of the aisle.

Schools are particularly struggling to hire more teachers of color and to fill positions in high-demand areas such as special education and math.

“This is a treasure trove of information, which prompts us to say, ‘We have a problem. Let’s figure out what the problem is,’” said Indiana Commissioner for Higher Education Teresa Lubbers.

“If the problem is we don’t have enough people interested in education or enough diversity in education, then we need to find out why,” she said.

Gathering more information is crucial for tackling those challenges, Lubbers said. Some students could be dropping out of college because it is not affordable, for example, while others could be switching to other majors.

The study did not look at other routes to the classroom. Many Indiana teachers pursue alternative teacher licensing pathways, which are open to college graduates who have not completed a university teaching degree program.

Black and Latino college students were especially likely to leave before landing in classrooms, according to the report. Of the students the study had demographic data for, students of color made up 12% of those pursuing education degrees but just 6% of those licensed. That’s a worrying trend because research has shown that having teachers of color improves outcomes for students of color.

About 34% of Indiana students are Black, Hispanic, Asian, or other children of color. But the state’s teaching force is overwhelmingly white, and just 8% of Hoosier teachers are people of color.

Another reason for the wide gap is because Black and Hispanic high school graduates are less likely to enroll in college and less likely to graduate, according to data from the Indiana Commission for Higher Education, so the pool of potential teachers is smaller.

The state is already pursuing policies to boost diversity, Lubbers said, pointing to programs for Black and Hispanic college students such as scholarships and student-teaching stipends.

“There are things that we’re doing. It’s just that it’s not enough yet,” Lubbers said.

Blake Nathan, CEO of the Educate ME Foundation, an organization dedicated to increasing the number of teachers of color, said that college students of color could face many hurdles that make it harder for them to become teachers, including concerns about incurring student debt and then entering a relatively low-paying field.

Some college students of color may be prevented from teaching because of state licensing requirements, Nathan said. To earn licenses, prospective teachers must meet grade point average requirements and pass tests that Nathan said put candidates of color at a disadvantage and should be studied for bias.

“It needs to be a statewide initiative to support more teachers of color,” Nathan said.