Please ensure Javascript is enabled for purposes of website accessibility Laredo was one of the nation's worst COVID-19 hot spots for weeks. Its leaders see no easy way out. - THE CHICAGO HERALD Press "Enter" to skip to content

Home » Laredo was one of the nation’s worst COVID-19 hot spots for weeks. Its leaders see no easy way out. 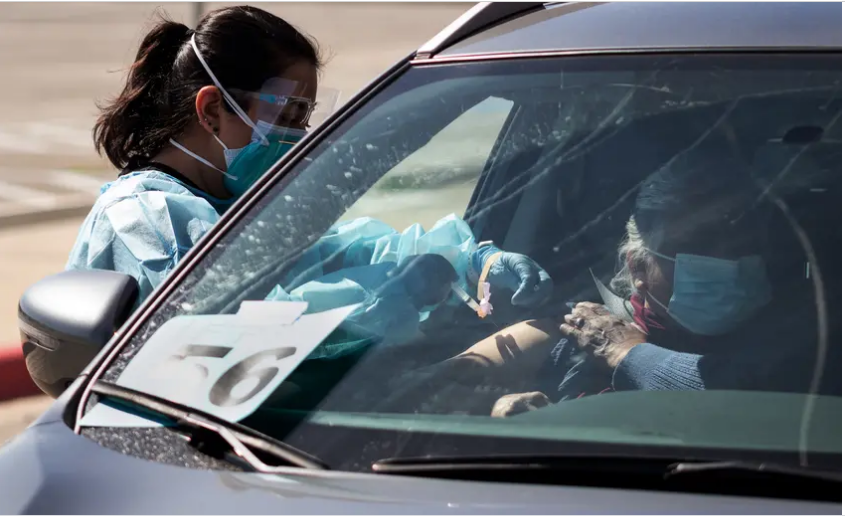 Laredo was one of the nation’s worst COVID-19 hot spots for weeks. Its leaders see no easy way out.

“Laredo was one of the nation’s worst COVID-19 hot spots for weeks. Its leaders see no easy way out.” was first published by The Texas Tribune, a nonprofit, nonpartisan media organization that informs Texans — and engages with them — about public policy, politics, government and statewide issues.

After weeks of holding the unwanted designation as one of the country’s worst coronavirus hot spots, according to New York Times data, Laredo’s leaders have surveyed the city’s surging COVID-19 caseloads and overwhelmed hospitals and found themselves with no good options.

The border city and international trade hub hasn’t received enough vaccine doses to make a big enough difference quickly enough. The state’s initial plan, which allocated vaccines in part based on the number of health care workers, hurt cities like Laredo, which has just two hospitals.

“We had a double whammy there, being medically underserved and then having a low amount of vaccines,” City Health Authority Victor Treviño told The Texas Tribune.

For weeks, both hospitals became, in Treviño’s words, “a COVID hell,” reaching critical levels in December. Patients were doubled up in emergency rooms to reduce overflow, he said, and Laredo Medical Center converted a floor to accommodate more patients.

At one point in January, almost half of the Laredo region’s hospital capacity was taken up by COVID-19 patients — the highest percentage in the state. The COVID-19 hospitalization rate has since fallen to 41% — the lowest it’s been in weeks.

Abbott sent more resources to Laredo on Jan. 22, including 5.9 million masks, 87,000 test kits and 470 staff. But Ricardo Cigarroa, a cardiologist and one of the city’s medical leaders, said Laredo’s 310 acute care beds are still consistently full.

Cigarroa said the allotted equipment, like medical tents, has been helpful, but it still has not brought the city’s runaway COVID-19 spread under control.

“There are only two ways to do that: quarantine and vaccine distribution,” Cigarroa said. “And we’re doing a lousy job at both.”

Laredo’s hospitals crossed the 15% threshold at the end of June for several months, and then again in October. Per Abbott’s order, Laredo officials curbed occupancy limits at bars and restaurants. Yet cases continued to explode in the city.

And in recent council meetings, some health care representatives have floated the idea of another partial shutdown.

Those who support another shutdown point to the early weeks of the pandemic, when Laredo responded swiftly with curfews and fines for not wearing masks. The city had also ordered some essential businesses to operate at 25% capacity, said Guillermo Heard, Laredo’s fire chief. Laredo acted more than a week before the U.S. Centers for Disease Control and Prevention or the state of Texas had issued COVID-19 safety guidelines, said council member Mercurio Martinez.

“While most communities, especially border communities, were seeing a rise in COVID infections, we were steady,” Martinez said.

But in May, Abbott prohibited cities and counties from upholding harsher policies like Laredo’s. In Laredo, the number of COVID-19 cases rose from less than a thousand in June to almost 4,600 during a statewide surge of cases in July — the same month that Abbott issued a statewide mask order.

Laredo’s COVID-19 cases dropped to 1,558 by October, then began to soar again the next month.

“The governor lifted our ability to fine and all of a sudden put limits on us,” Martinez said. “That’s when we shot up.”

Despite Laredo’s stunning hospitalization rates, Heard said the city is barred from implementing other local safety restrictions. City leaders requested the governor’s permission to limit essential businesses to 25% capacity during a council meeting on Jan. 19.

Renae Eze, an Abbott spokesperson, said that increased restrictions would not protect communities without enforcement.

Local law enforcement issued more than 20 citations for businesses that violated the restrictions in January, and has continuously monitored occupancy limits at restaurants and bars, according to a city press release. Mayor Pete Saenz and other officials have also continued to promote social distancing and mask wearing to curb infections as primary solutions.

The mayor said while some of Laredo’s medical community wants to shut down the city, Abbott’s orders prohibit that step. Treviño, the Laredo health authority, has repeatedly argued against stricter measures because of the economic damage they can cause.

“We may be hurting the very community we’re trying to protect,” Treviño said. “These measures can have a profound negative impact on individuals.”

Close to one-third of Laredo’s population lives below the poverty line. Martinez, the city council member, said many residents live paycheck to paycheck and don’t have savings to help them survive a city lockdown.

Martinez said if they were to pass a stricter measure, the city would have to be prepared to feed residents and pay their bills in the absence of paychecks.

“Without a contingency plan, we can’t [shut down],” he said. “It’s not possible.”

During the special council meeting, Cigarroa cited past pandemics, like the bubonic plague in the 14th Century, as examples of outbreaks that were only controlled through quarantine.

“History will look back at us and at what we did, and it will treat us harshly if we didn’t do everything that we could,” Cigarroa said during the meeting. “So the solution of this is in quarantine, in shutting our city down the way we did back in April.”

The council eventually approved a measure requiring residents to wear double masks, voted to ask Abbott to send Laredo more vaccines and explain what they see as inequities in vaccine distribution and requested National Guard support from the federal government.

The council did not vote on a shutdown because it would defy the governor’s orders, according to the mayor’s office.

Laredo’s nearly 260,000 residents are more than 95% Hispanic, and the virus has hit Hispanic communities particularly hard across the state. Hispanics comprise almost 40% of the state’s population but 47% of COVID-19 fatalities, according to Texas Department of State Health Services data.

The importance of family gatherings in Mexican and Mexican American communities has contributed to the rise in cases, Heard said.

“We’re very clannish,” Martinez added. “The little carnita asadas, the barbecues — as a result, we have high numbers of infections, and so one begets the other.”

Richard Chamberlain, the city’s health director, said the best way out of the city’s COVID-19 crisis is through vaccinations.

“As long as we get those vaccinations inside the arms of citizens of the city, we will be able to decrease this hospitalization rate and curb this pandemic,” Chamberlain said.

But early vaccination efforts have been chaotic. Webb County as a whole has received 39,400 vaccine doses since distribution began in mid-December, which has covered only 21% of adults over 16 years old.

The Laredo Morning Times reported that online vaccination appointments filled up within nine minutes in early January, and the line of vehicles with people waiting for a first dose at Texas A&M International University extended for six miles.

Alyssa Cigarroa, Ricardo Cigarroa’s daughter and a newly-elected council member, said the vaccine process has felt disorganized at every level. She said the city’s online system crashes frequently, and no one regularly answers the city hotline when residents call to sign up for vaccinations.

“We have constituents that are making appointments and getting vaccinated in San Antonio and Corpus [Christi] and Austin and everywhere else that they can get in,” Martinez said. “If we can get an aggressive plan, if we can get access to the vaccines, we have the capabilities … to inoculate our constituents quickly.”

Alyssa Cigarroa said problems with the initial vaccine rollout showed how necessary it is for an outside body like the National Guard to come in.

“Clearly, something’s not working, and we do need the help,” Alyssa Cigarroa told The Tribune. “I don’t see anything wrong in asking for it if we can’t control [the virus]. It’s our responsibility, this is our community, and we need to do everything in our power to protect our community.”

This article was originally published on Laredo was one of the nation’s worst COVID-19 hot spots for weeks. Its leaders see no easy way out.