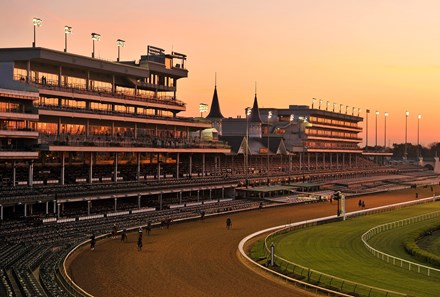 The Kentucky Derby returns to its traditional First Saturday in May date this year, and while the state’s COVID-19 restrictions will keep attendance down, the 147th Run for the Roses is providing hope for many in Louisville’s hospitality industry.

The legendary horse race comes at a time when tourism is picking up for Louisville. According to the city’s tourism and visitors bureau, the city saw 30,000 people attend more than a dozen events in March. That’s compared to just 50,000 people overall who attended 30 events during the last half of 2020.

And thousands more will flock to the city this weekend.

As of Thursday afternoon, 61% of the city’s hotel rooms were booked for Friday and Saturday nights, according to Louisville Tourism.

Rooms at some of the city’s top hotels were still available for a premium as of Friday morning. A room at The Seelbach Hilton cost at least $1,249 a night for the next two nights, while just down Fourth Street, a “deluxe room” with a king-sized bed was available for the special Derby rate of $2,000 per night.

At least 150,000 people attended the Kentucky Derby each year from 2005 to 2019, with no fans allowed last year because of the coronavirus, which also forced Churchill Downs to delay the race until Labor Day weekend.

This year, Churchill Downs will make up to 50% of its reserved seats available and 60% in some premium dining areas. The infield will be open as well, but only at up to 30% capacity.

Tickets were still available for Saturday. At Ticketmaster, access to the Churchill Downs infield was $80. For the more refined, reserved seats in the grandstand and suites were going for anywhere between $450 and $2,995 each.

Besides the pandemic keeping Churchill Downs from welcoming a full crowd to the track, there will be other changes as well. Louisville Mayor Greg Fischer usually uses Derby weekend to host business leaders as part of the city’s economic development pursuits, but that’s not happening this year.

Still, as he told WDRB-TV earlier this week, he’s optimistic about how the city will emerge from COVID-19.

“Tourism is already starting to come back, so I think we’re in a good place and strangely I’m more optimistic about the future of our city than ever,” he said.