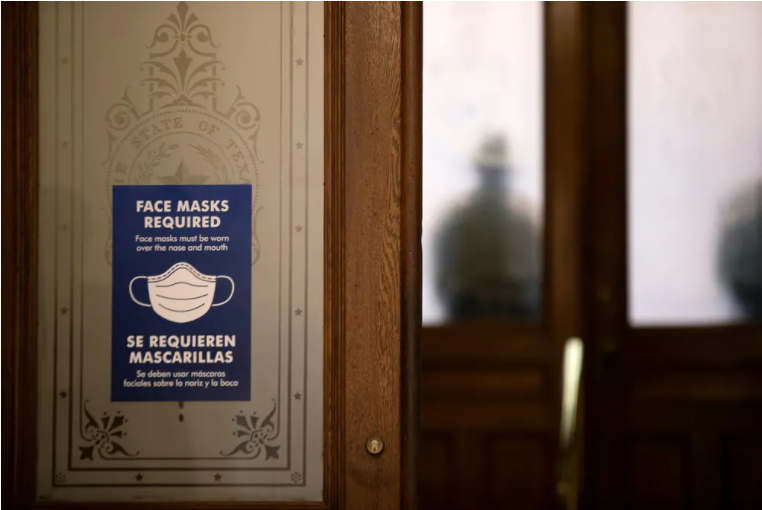 Now that Gov. Greg Abbott’s statewide mask mandate has ended, people visiting the Texas Capitol will no longer be required to wear face masks. But at least for now, more restrictive rules adopted by the House and Senate will remain in place — and leaders in the two chambers haven’t yet indicated publicly any plans to change those protocols.

In the Senate, lawmakers and staff must test negative for the coronavirus before entering the chamber or attending committee hearings. And masks are also required in the chamber unless a senator is seated alone at a desk.

And in the House, masks are also mandatory, unless a member is speaking from a microphone or protected by a barrier and socially distanced from others. Though testing is not required in the lower chamber, members are allowed to cast votes on legislation from outside the House floor.

Since the Capitol reopened to the public in January, the State Preservation Board that oversees Capitol grounds has required masks “at all times” while inside the building. But a spokesperson for the agency that Abbott chairs said that starting Wednesday, the board will instead “strongly encourage” visitors wear masks in public areas of the Capitol — and deferred to the two chambers for questions about their own operations.

“The House and Senate chambers are under the purview of the respective bodies, so we ask you contact them concerning their operations,” said Chris Currens, director of special projects at the agency, in an emailed statement.

Abbott announced he was lifting public mask requirements statewide last week. Under his order, people cannot be arrested or fined for not wearing a mask. But cities and counties can still require them inside their government buildings, and private businesses can require their customers and employees to wear them.

The House and Senate protocols were put in place at the start of the legislative session in January, when a statewide mask order was in effect. Lt. Gov. Dan Patrick, whose office did not return a request for comment, said in January that pandemic-related protocols could be reviewed after the first 60 days of the legislative session — a mark the Legislature will hit Friday.

Until and if that review happens though, the current rules are still in place. In the House, at least one member has filed a proposal that would deactivate the section of the lower chamber’s rules that requires members to wear masks, among other things. It’s unclear whether that resolution, filed by state Rep. Bryan Slaton, R-Royse City, will make it to the House floor for debate in the coming days or if another proposal will gain traction among members.

Procedurally, any resolution filed in the House to tweak chamber rules is automatically referred to the House Administration Committee for consideration. If that 11-member committee approved the resolution, it could then end up on the House floor for debate.

“We had a working group set up protocols and had the House consider those in the House rules on the third day of session,” the speaker told KXAN last week. “Those were adopted, and for those pandemic rules to change, we would have to have a vote on the House floor of all 149 members who vote on those.”

This article was originally posted on Masks won’t be required at state Capitol — but lawmakers face stricter rules in House, Senate chambers