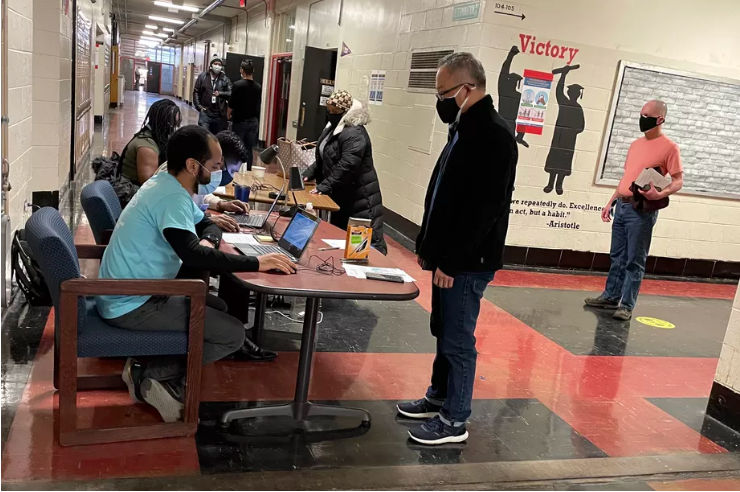 District and city health officials appear close to reaching their goal of vaccinating all of Philadelphia’s public school teachers and school workers within the next four weeks, Superintendent William Hite announced Thursday.

So far, 9,000 teachers and school staff have been vaccinated, while 20,000 others have made appointments, officials said at South Philadelphia High School, one of six vaccination sites for school workers.

About 35,000 educators, including those in charter and private schools, have received invitations to get vaccinated.

“That’s a very large number of people who are going to get vaccinated in a small amount of time as the result of this,” said Philadelphia Health Commissioner Dr. Thomas Farley Thursday.

The availability of vaccines for teachers and staff who work in school buildings — or are soon to return — has been an issue, along with ventilation standards, in the school district’s efforts to reopen for some in-person learning. Hite and Mayor Jim Kenney announced Monday that reopening for early-grade students would occur in phases this month. That will allow many teachers returning to school buildings to start the vaccination process, which involves two shots. (Some teachers could decide against vaccination.)

“The safe return of learning was made possible by the tremendous work of thousand district employees who have been working hard since March 2020,” Hite said. “They have been putting multiple layers of safety protection in place in our schools — implementing a wide range of safety protocols to protect the health and well being of our students and staff.”

Hundreds of teachers lined up Thursday in the auditorium at South Philadelphia High School to get their COVID-19 shot. The process is straightforward: Once teachers arrive at the clinics they are instructed to wait in line before seeing a health worker. Once they are seated teachers are asked a range of questions and instructed to sign forms before receiving the shot. After getting the shot, teachers wait for 15 minutes to observe any possible side effects.

“I’m excited that things are finally moving in the right direction and excited to have the possibility of more kids having in-person learning just knowing how much they’re suffering from being online,” said David Tarantino, who teaches kindergarten to eighth grade music at Allen Stearne Elementary School in Frankford. Tarantino was one of the teachers who got vaccinated Thursday at South Philadelphia High School.

Hite said Thursday the district is expecting 2,650 district students to show up for class in the first phase. Fifty three schools are to open March 8 to students in prekindergarten to second grade. Staff members, including teachers needed for those grades, returned Wednesday.

Ashnate Carr, who teaches fourth grade at Laura Waring Elementary School in Fairmount, got her shot through her insurance. She said the district’s effort is one way of keeping teachers safe. “I’m glad that teachers can have that peace of mind to go back to school,” she said.

March 8 will mark the district’s fourth attempt at reopening plans for the early grades. Families of students in pre-K to second grade who initially chose to remain fully remote won’t see any change. They will be able to opt into hybrid learning after all students in those grades who chose hybrid have returned to school buildings.

“Once this first stage is completed we will slowly phase in other groups of students who we know will benefit from having the opportunity of in-person learning,” Hite said.

Teachers and staff from district, charter, and private schools began to get their scheduled shot about two weeks ago inside the Roberts Center at the Children’s Hospital of Philadelphia, or CHOP. CHOP was tapped to coordinate the vaccine distribution for thousands of city education workers, initially at the Roberts Center, and then in six other school locations across the city.

“Records show that students who come from lower-income communities and disadvantaged backgrounds do best when they’re in classrooms,” said Dr. Ron Keren, chief medical officer at CHOP. “That’s why we are partnering with the school district to come up with a comprehensive testing program.”

The district’s partnership with CHOP is being powered by a grant from Independence Blue Cross Foundation and its President Lorina Marshall-Blake.

The city’s health department had not put teachers among the highest priority groups for vaccines, saying that national data had indicated schools are not major sources of transmission.  That changed after teachers refused to return to school buildings and held protests outside. Kenney then announced a plan to vaccinate teachers.

Last month, Philadelphia Federation of Teachers President Jerry Jordan invoked terms in a memorandum of agreement the district signed last fall that dictated the safety conditions in schools before in-person learning could resume. The agreement called for hiring an independent mediator to determine whether the safety requirements were met, if the two sides were at odds. It was announced on Monday the mediation process had concluded with the decision that the PFT conduct a process to “clear for occupancy” classrooms and other spaces in the 152 school buildings slated to open for the youngest learners.

“I was frustrated by the whole thing that it took so long to reach this agreement,” Tarantino said. “What if they had just done all these negotiations over winter break and then we could have had something in January? Why couldn’t both sides just negotiate much sooner, you know? And so now we have three months left in the school year.”

Other elementary schools, and high schools offering pre-K classrooms, are scheduled to open in phases over the next several weeks. The district’s goal is to announce March 8 another group that will return on March 15. The third group to return will be announced March 15 and return on March 22. Schools’ reopening will be subject to the detailed ongoing safety review by the PFT’s environmental scientist.

Robin Cooper, president of Teamsters Local 502/CASA or the principals association, was in line on Thursday to get her shot. “We hope the schools are safe and we have done everything in our power for a safe return to school,” she said.