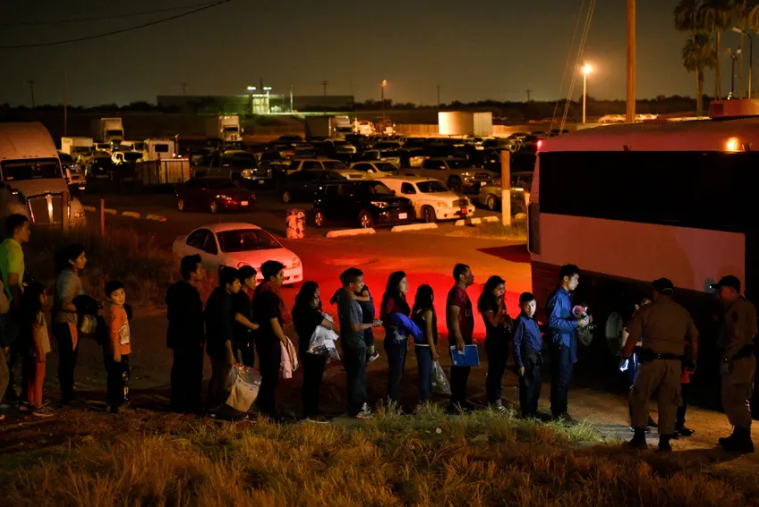 EL PASO — More than 100,000 people were either apprehended by or surrendered to federal immigration officials on the U.S.-Mexico border in February, continuing an increasing trend that began last year and persists under a Biden administration that has rolled back several of former President Donald Trump’s hardline policies.

The statistics released Wednesday by the U.S. Department of Homeland Security include about 9,460 unaccompanied minors and more than 19,240 family units, increases of about 62% and 38% respectively when compared with January’s figures.

In Texas, the Rio Grande Valley and El Paso sectors of the U.S. Border Patrol remain among the busiest crossing points, with nearly 28,000 and 13,200 migrants apprehended last month in those areas, respectively. The El Paso sector also includes New Mexico.

The numbers represent a continuing challenge for the Biden administration as shelters for unaccompanied minors near capacity and the continuing COVID-19 pandemic has stoked criticism from Republicans who, despite downplaying the effects of the virus last year, say the president is allowing sick migrants to enter Texas.

Since taking office, President Joe Biden has undone several of Trump’s immigration policies, which his administration says is meant to reflect a more humane approach toward migrants and asylum seekers. But his critics said that approach has fueled the current increase.

The Biden administration has also refused to call the situation a “crisis,” but acknowledged on Wednesday that striking a balance between messaging and compassion is an uphill climb.

“When you look at the issue of mixed messages, it is difficult at times to convey both hope in the future and the danger that is now,” said Roberta Jacobson, a former U.S. ambassador to Mexico and current Biden administration coordinator for the southern border.

That same messaging hasn’t deterred migrants from traveling to the border in years past, however. And Republicans are seizing on the rising numbers to declare Biden an irresponsible advocate for open borders.

“The first step to solving a crisis is to first admit you have one. Let’s be clear, even if you don’t admit it, it doesn’t mean that there isn’t a crisis,” U.S. Rep. Jodey Arrington, R-Lubbock, said Wednesday at a news conference. “We are representatives, members of Congress, who represent border states and our communities are at ground zero and our constituents are on the front lines, bearing the brunt of the lawlessness and self-inflicted crisis at the border created by the Biden administration.”

On Tuesday Gov. Greg Abbott visited the Rio Grande Valley after announcing Operation Lone Star last weekend. The operation will increase Texas Department of Public Safety and Texas National Guard patrols on the border to “deny Mexican cartels and other smugglers the ability to move drugs and people into Texas,” according to a statement.

Abbott lambasted the Biden administration’s immigration policies and said they indicate he cares less about Americans than he does foreigners.

Despite the criticism, the Biden administration continues to move forward with its immigration strategy. His office announced on Wednesday that it’s restarting a program that seeks to reunite minors in Central American countries with their parents who are lawfully present in the United States. Jacobson said about 3,000 minors had previously qualified but were left out of the program after Trump ended it in 2017.

Also on Wednesday, Troy A. Miller, a senior official performing the duties of the U.S. Customs and Border Protection commissioner, said during a conference call with reporters that CBP has cleared the entry of about 1,500 migrants who were part of the Trump-era Migrant Protection Protocols, which forced asylum seekers to wait in Mexico until their court hearings in American courtrooms in Mexico. As of late last month, more than 25,000 migrants were in the program.