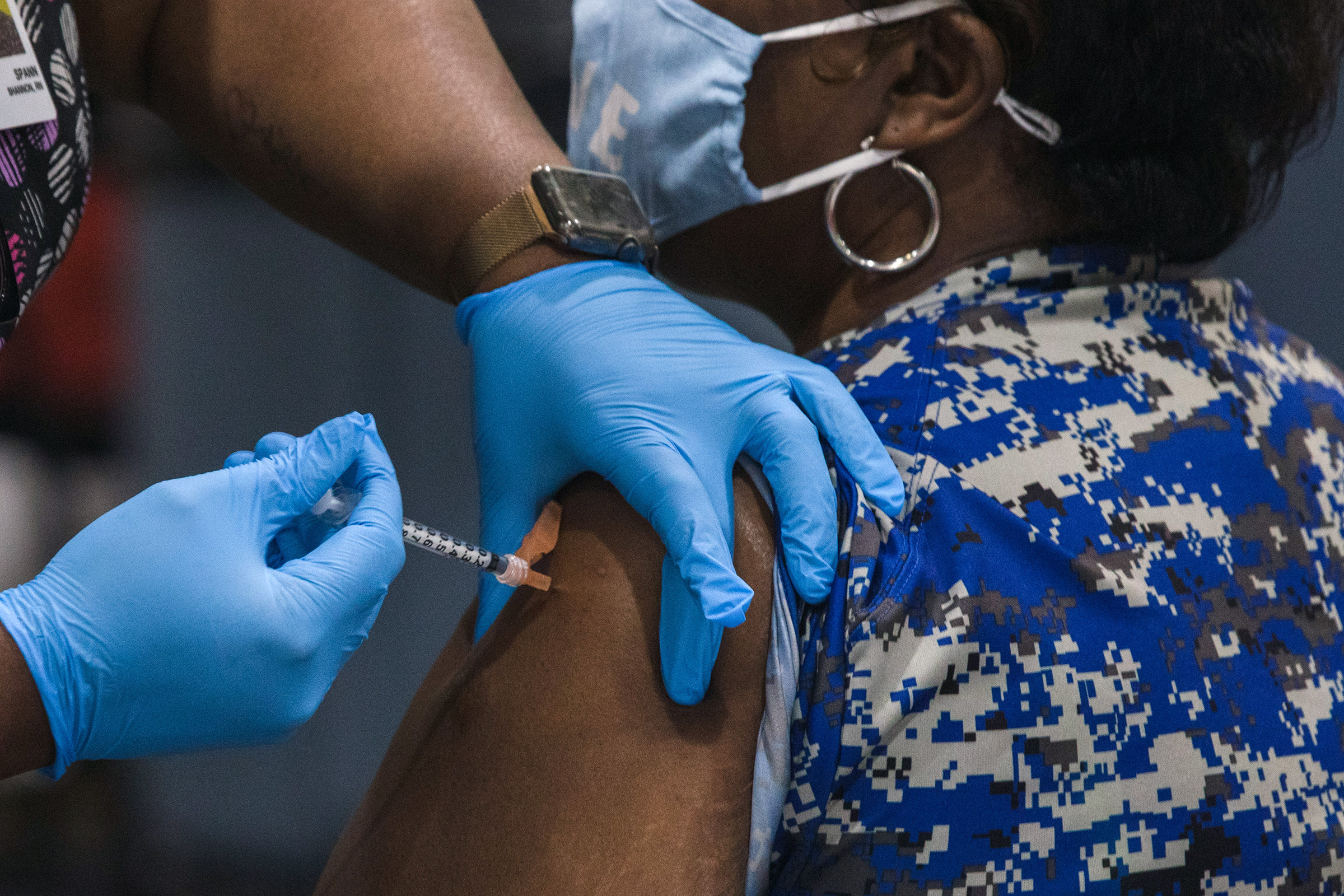 Montana’s COVID-19 vaccine distribution is among the most efficient in the nation, but closer examination reveals a patchwork of systems among counties and tribal governments that will be put to the test as the state opens vaccine eligibility to all people 16 and older starting this month.

KHN, Montana Free Press and the University of Montana School of Journalism surveyed all 56 counties and eight tribal governments to find out how vaccine distribution has worked over the past four months and what residents might expect when the floodgates open.

Montana’s rate of COVID vaccines given is in the top tier in the nation, according to the Centers for Disease Control and Prevention. More than 191,500 people — roughly 18% of the state’s population — had been fully vaccinated by the end of March. But that progress papers over a disjointed rollout that’s been left to individual public health departments that are already overstretched.

An increasing number of employees have resigned after working long hours while being harassed and blamed for enforcing COVID restrictions such as mask mandates. At least 11 counties have lost their top health official in the past year, though many more public health workers have left their jobs.

The pressure remains as larger shipments of vaccines arrive and highly contagious variants of COVID virus spread in Montana. More pharmacies are coming online to administer doses, which is expected to help in the race to vaccinate Montanans. But the task of ensuring everyone who wants a shot gets that chance will likely continue to fall on local health officials.

For those seeking vaccines, the process can be bewildering. In Missoula County, Dennis Klemp qualified early on for the shot as an 81-year-old with kidney disease. Klemp, who doesn’t have a computer, put the county’s health department on his phone’s speed dial and called daily, but he was unable to secure a spot in vaccination clinics that filled within minutes.

“I was pretty despondent,” Klemp said. “There was mass confusion, and I’ve got a lot of friends who were just as confused as I was.”

After spending more than a month trying to book an appointment, Klemp called his local television station for help in February. NBC Montana reporter Maritsa Georgiou said she managed to book an appointment for him over the phone, and she estimated she similarly helped at least 30 others register for vaccines.

There are multiple ways to get a vaccine in Montana. Tribal governments are getting doses to Native Americans, and some are also vaccinating non-Natives either through the state or the federal Indian Health Service program. The U.S. Department of Veterans Affairs is a source for veterans, their spouses and caregivers. Federally contracted pharmacies are giving vaccines to the general public after distributing shots in assisted living centers.

For counties and tribes that participate in the state program, a mishmash of strategies has emerged in the absence of a detailed state plan to sign up people for doses. Montana’s patchwork approach is no accident. State leaders deliberately left it up to local governments with few rollout guidelines because they said local leaders know best how to reach their residents.

Some states have set up one-stop vaccine registration systems to bring order to the scramble of the largest vaccine effort in history. But Jim Murphy, head of Montana’s Communicable Disease Control and Prevention Bureau, said a pandemic wasn’t the time to force a new system on local governments, and that Montana’s approach is working.

“Most of our major providers already have those systems built, so we weren’t going to say, ‘Well, here’s another big road you can take,’” Murphy said. “Just didn’t seem like it would be worth that effort.”

Nicholas Stewart, a senior research scientist at the international health data nonprofit Surgo Ventures, said Montana’s high national ranking, despite its lack of a unified system, has been a surprise.

Montana’s success may be partly due to officials’ familiarity with the inherent challenges that come with delivering health care in the fourth-largest state by land, yet eighth-smallest state by population. Public health workers have long worked to reach isolated people and spot hurdles to accessing care, such as a lack of internet access.

Ideally, states would test different scenarios before expanding vaccine eligibility, but needs have rapidly shifted. “What we have constantly been seeing is decisions are being made on the fly,” Stewart said.

In Carter County, in the southeastern corner of the state, early vaccine efforts faltered because nobody was on hand to administer the shots. The area’s health officer resigned in mid-December and the county had been without a public health nurse since last summer. In January, residents eligible for a shot had to drive to neighboring Fallon County, where Carter County had sent its allotment of vaccines to prevent wasting doses.

Trish Loughlin, Carter County’s interim public health nurse, has led the vaccine effort part-time since late January. Despite the initial lag, Loughlin said, the county is catching up and everyone who wants a dose should be able to get one by early April.

“The collaboration of a neighboring county is what helped; it’s the only way we did that,” Loughlin said.

“There was a little bit of panic,” Murnion said. “But after we got through that first clinic, now we whip it out like clockwork.”

She said she’s relieved the state let Fallon create its own vaccine plan, which includes calling people already in its system to book appointments and working with other counties to move doses based on need.

“It might not be the way everybody else does stuff, but it’s the way we do stuff,” Murnion said.

In larger counties, a major hurdle is making sure all residents can navigate systems in which they’re competing with thousands for appointments.

But, to the dismay of some, the county doesn’t offer a vaccine waitlist for people struggling to book an appointment.

She said making vaccines available to all people over 16 may complicate access for more vulnerable groups until supplies increase. An effort is underway, she said, to reach “stragglers” and homebound residents.

The Flathead Nation’s Confederated Salish and Kootenai Tribes have outpaced many Montana counties when it comes to vaccine distribution, despite what Health Director Chelsea Kleinmeyer described as a low initial allocation by the state to the tribes. Weeks before the state’s April 1 expansion of eligibility to the general population, tribal health officials were offering shots to all adult tribal members along with descendants and other Native Americans.

Kleinmeyer said tribal health officials relied heavily on community health representatives to identify and contact vulnerable elders. Health officials eventually worked their way to anyone living in an American Indian household along with tribal and nontribal teachers and employees. The Salish and Kootenai Tribes had planned to vaccinate approximately 12,000 people.

“We feel like maybe we hit this saturation point with tribal people on the reservation,” Kleinmeyer said, adding that the tribe is now preparing to help nearby counties.

“We thought, if you could get a ticket to go to a basketball game, why couldn’t we do that here? And it worked,” said Karen Sullivan, health officer for Butte-Silver Bow County.

Sullivan said the overall joy that people exhibit at vaccine clinics has been a bright spot during a difficult period. The past year has been one of threats and verbal attacks against her and her staffers for implementing COVID restrictions. Sullivan, 62, said she’s considering early retirement after seeing the vaccine rollout through.

“I’m not gonna leave in the middle of this,” Sullivan said. “When we get to the point where we have a great percentage of our people vaccinated, I’ll give retirement some serious thought. I need the rest.”