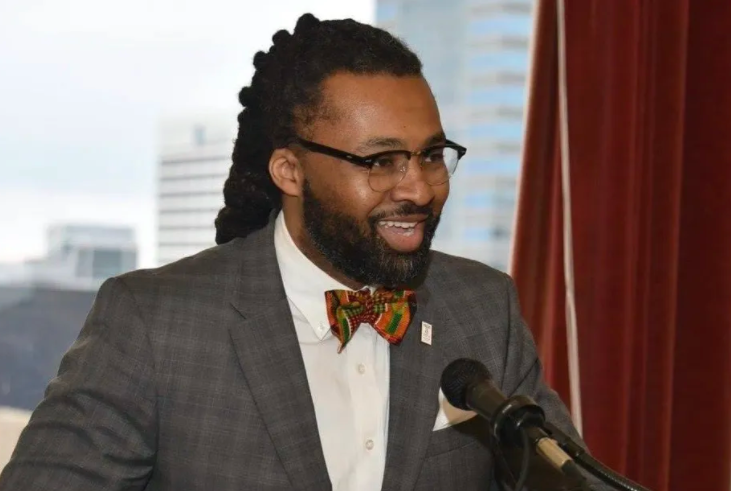 Reginald Streater was picked by Mayor Jim Kenney to sit on Philadelphia’s Board of Education, one of three new board members to join in December.

Streater attended two district schools that have since been closed, Leeds Middle School and Germantown High School. It’s that familiarity and his legal background he thinks will help make a difference sitting on the board.

“I truly believe that public education should be considered not only a civil right, but also a human right,” Streater said. “To serve Philadelphia in this manner is something I do not take lightly.”

Streater is an attorney at Berger Montague, PC, and served as the vice president of the Greater Philadelphia Chapter of the American Civil Liberties Union of Pennsylvania.

The ACLU, however, has joined other groups, Offit Kurman P.C., UrbEd and the Alliance for Philadelphia Public Schools, or APPS, in a lawsuit against the school board, saying its new policy limiting the number of public speakers at board meetings violates the Sunshine Act.

Streater talked with Chalkbeat about his mission for district students, the lawsuit by the ACLU, and why he chose to attend Germantown High School.

You are not originally from Philadelphia. Where did you grow up?

I was born in Columbia, S.C., and went to public school in the South. For my first and second grade years I moved to Philadelphia and then from that point, I went to private schools and then went on to finish my grade school education at Leeds Middle School and then Germantown High School.

Why did you decide to attend Germantown as compared to a magnet school?

It’s funny, because I actually got into Dobbins, which was a special-admission school. I do sometimes think, ‘What would my life have been like had I attended Dobbins?’ I thought I wanted to be an architect and Dobbins had a great architectural program at that time. I visited Germantown and remember saying, ‘I don’t want to get up at 5:30 in the morning to catch the train and the bus over.’ So while I was at Germantown making my decision, a brother walked up in an Air Force uniform and recruited me to Germantown’s Junior Air Force ROTC there. At that time I was looking for structure. The program entailed two days a week of full uniforms, military ranks, and drill team and color guard drills. And that is what sold to me to attend Germantown. I don’t regret it at all.

100%. I do think, especially in the school district, that is becoming even more diverse. And young people, who may not come from our communities, may also not look like us. I think it would benefit us all for young people to see an iteration of a Black man who breaks a lot of the cultural norms. A lot of the stereotypes that have been put forth, growing up, you hear Black men are hyper-masculine and hyper-violent. It’s beneficial to all to see a Black man who is both caring and nurturing. That is a lesson that can be taught that can have profound impacts. Impacts that can be life saving. For example, somebody who was taught by a Black male may grow up to be a police officer, and perhaps they may make a different decision informed by the humanization via a memory of having a Black man as a teacher. I had four Black male teachers in my formative years in my school. I’d like to think that they made a huge impact on my life.

Talk about having to resign from the ACLU board and your thoughts on limiting time for public speakers at board meetings. Doesn’t that go against freedom of speech?

Without additional facts, I do not believe it goes against the constitutionally protected freedom of speech. Well, the lawyer in me is like, ‘I’m going to be careful about what I say’ because as a board member, I am one of the nine members of the board, which is the named defendant in current litigation related to this question, but I’ll talk about it as an individual who happens to be an attorney. Yes, I resigned as a member of the Greater Philadelphia Chapter of the Pennsylvania ACLU board. I did not have to resign, nor was I forced to. Also, the ACLU is representing two nonprofit organizations in a lawsuit against the board, in which I’m a board member.

From my personal understanding, the board is being sued for a violation of the Sunshine Act, not for a free speech violation.

After reading the complaint filed in this matter, I did not locate any arguments or counts as to an alleged free speech violation. From my reading of the complaint, the [basis] of the litigation is based on an argument as to one, the reasonableness of the opportunities that the board gives individuals to speak at action meetings, and two, whether the restrictions are so restrictive that it is no longer reasonable under the Sunshine Act.

From my personal understanding of free speech, I tend to think of what recognizes as “viewpoint discrimination.” For example, if a litigant were to allege that one, the board doesn’t want to hear from individuals because they don’t like the political or religious content of what the speaker has to say, and two, that the board is using the content neutral speaker policy as pretext for viewpoint discrimination, then maybe a free speech argument would be triggered.

In the most recent complaint filed, I have not seen this argument and I have not seen free speech expressly alleged by the litigants. From my understanding, the government may implement permissible time, place and manner restrictions so that it can conduct its business.

The district plans to spend nearly $1.3 billion of the relief money on buildings, academic recovery programs and personnel to help students deal with trauma from the pandemic. Is this the correct route?

If I could wave a magic wand, things such as ventilation and overall safety of buildings would be a reality, now. That stuff needs to be taken care of. As well as the other items you mentioned. Other than this, I’m not sure, because we haven’t really gotten the itemized portion of the budget. I don’t know the answer to that yet.

What’s your goal in coming on the school board?

So my goal was one to look at things from the diversity, equity and inclusion lens. I am particularly excited about the board’s goals and guardrails — as they provide our North Star for a school district that works for all of Philadelphia’s children. I’m looking forward to the prospect of the school district having a DEI officer who has some sort of semblance of independence to root out problematic practices within the district and at our schools. I also want to bring my perspective as a Black man, parent and lawyer to help problem-solve and get us from “no” to “how” as a village and district.