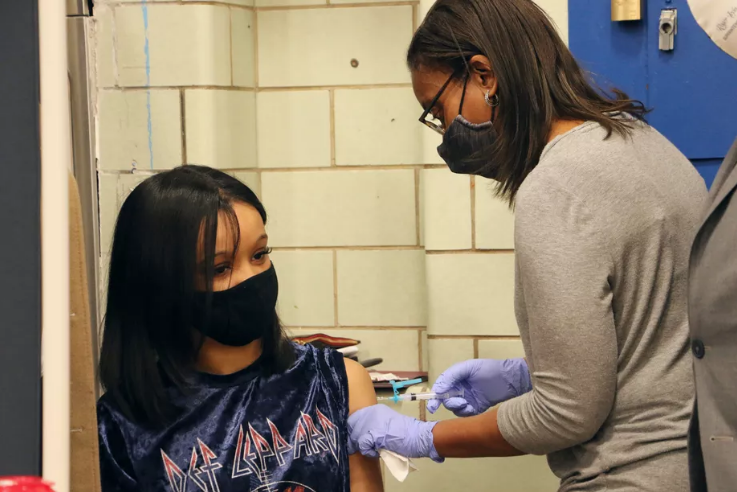 Just over a year after the pandemic began, Ann Jansen got her first dose of relief Tuesday.

The Newark teacher had tried repeatedly to schedule a COVID-19 vaccination online but found no openings. But, beginning this week, a pop-up vaccination site inside a high school gym is offering shots just to school employees — and Jansen was one of the first in line.

The shot will help her feel safe returning to her classroom next month, when Newark school buildings are slated to reopen after a full year of remote learning. “I teach second grade, so it’s really important for me to be with my kids in person,” she said.

The new vaccination site will start to make good on a promise by Superintendent Roger León that school workers will be able to get at least their first coronavirus vaccine shot before classrooms reopen April 12. About 40% of families said in a recent survey that their children will return to school at least part time when buildings reopen, León said Tuesday.

Newark’s vaccination drive follows a push by President Biden to get a shot in the arms of all K-12 teachers and child care workers by the end of March, and a recent move by New Jersey Gov. Phil Murphy to make school employees eligible for the vaccine.

Newark officials hope the vaccine will ease the fears of any teachers and other school employees who are still reluctant to return to classrooms. But convincing staffers to get vaccinated may be its own challenge: Only a quarter of district employees said in a survey last month that they were ready to get the vaccine, officials said.

While the district is not requiring employees to be vaccinated before returning to school, officials expect more people to voluntarily register as they see their colleagues receive shots without complications.

“Our goal would be to have all 8,000-plus staff and teachers throughout the whole district vaccinated,” said Dr. Mark Wade, who heads Newark’s health department.

In conjunction with the city, the district has turned the Barringer High School gymnasium into a temporary vaccination site exclusively for teachers and support staff in Newark’s traditional, charter, and private schools, as well as childcare workers. School nurses are administering the first dose of the Moderna vaccine this week, and the second dose four weeks later.

Despite the easy access, only 2,000 of the district’s roughly 8,000 employees said in last month’s survey that they wanted the vaccine, León said. However, he added that more staffers have recently expressed interest and will have an opportunity to register for the next round of shots.

Jada Velez, a district transportation aide, was initially hesitant to get the vaccine because she feared possible side effects. However, she decided to go for it after watching her mother — who also works for the district — get vaccinated without any problems.

“Everyone who’s getting it is reassuring me,” Velez said.

Even as the district tries to boost demand for the vaccine, officials are also watching the supply.

Murphy has repeatedly said the state needs far more doses to immunize the millions of eligible residents, which includes people over 65, those with certain chronic illnesses, and now teachers. To date, about 25% of New Jersey residents have been vaccinated, according to Centers for Disease Control and Prevention data.

Dr. Wade said Newark had requested 2,000 vaccine doses for Newark school workers based on the district’s survey. He said he expects the city will receive additional doses as demand increases, and noted that educators who didn’t register for a shot this week can still visit any of the city’s other vaccination sites.

“We know there is still a vaccine shortage, and all of the state’s health departments, the school districts, are lobbying for the same vaccine,” he said. “But so far, we’re on point.”

Kendra Burton, who works in the district’s central office, was among the employees who received a shot Tuesday. She signed up largely to relieve her anxiety about infecting her children — triplets who are in the first grade and have severe asthma.