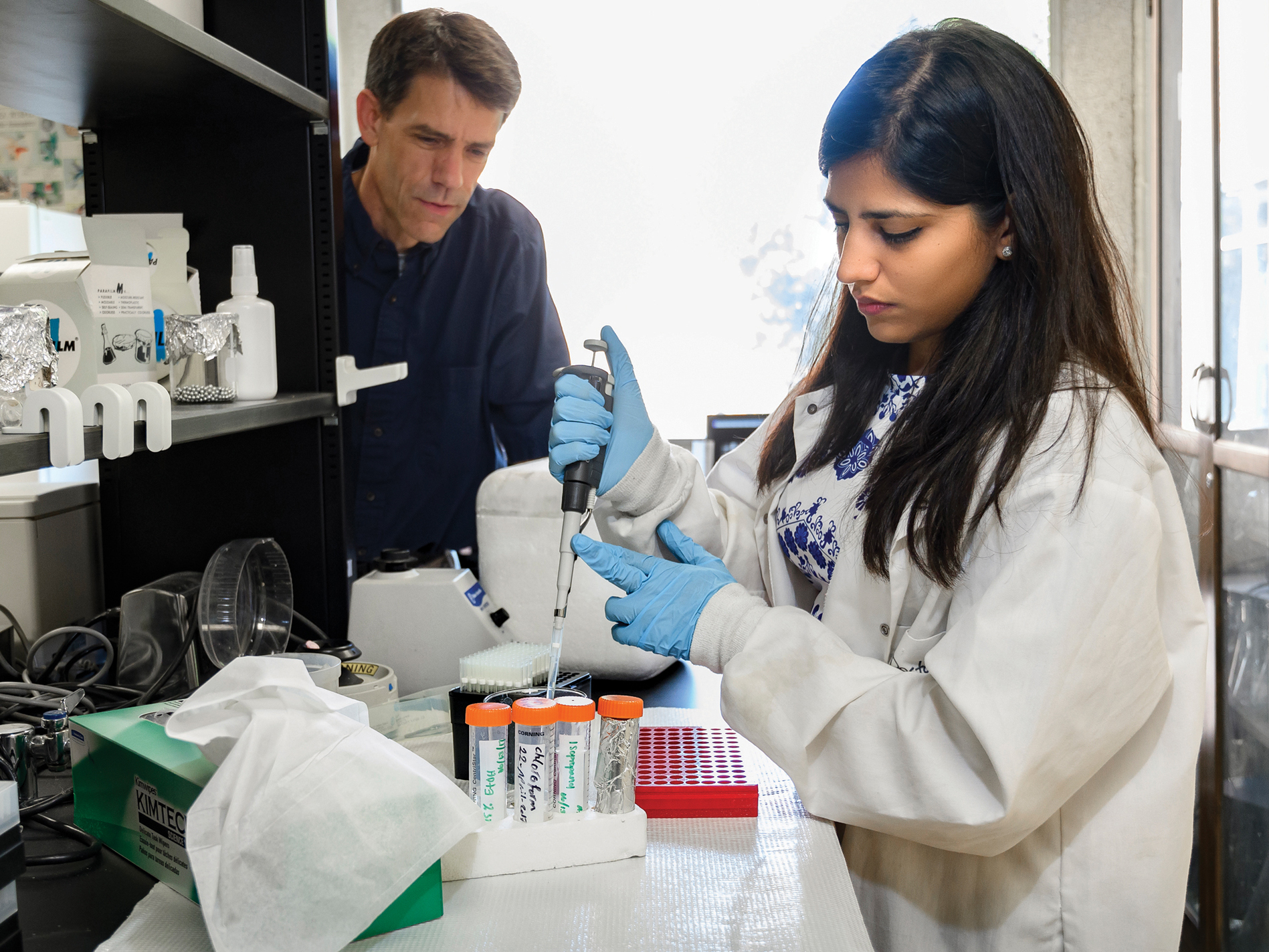 North Carolinians can now get monthly shots to treat HIV

By Hannah Critchfield on February 9, 2021

The Food and Drug Administration approved the use of monthly shots for treating HIV last week.

For the first time, people l

iving with HIV, a virus that if untreated can lead to AIDS, have an option outside taking a pill daily to suppress the virus.

“People living with HIV are living a long time,” said David Wohl, a professor and HIV researcher at the University of North Carolina School of Medicine who led some of the clinical trials for the treatment. “And to take a pill, every day for the rest of your life, is fine for many people. But for some people…this could be really convenient and liberating.”

The treatment, called Cabenuva, is a combination of two drugs, cabotegravir and rilpivirine. People who use it will first need to take a daily pill for about 30 days prior to beginning the treatment to ensure their HIV levels are adequately suppressed.

From there, they will only need to see a medical professional who can administer the shot — the treatment is not yet approved for self-injection — once a month.

HIV treatment has come a long way. The first HIV treatment, which became available in the late 80s, caused side effects that could be deadly, such as liver damage and low blood cell counts.

By the time the FDA approved of the long-acting injectable therapy on Jan. 21 of this year, daily pills to suppress the virus looked vastly different — today, they’re safe, well-tolerated, hard to develop a resistance to, and potent.

“We’ve been able to get down to not only just one pill but a pill that’s very easily tolerated and doesn’t have a ton of serious side effects, which in itself is a great feat,” said Christina Adeleke, policy and communications manager at the North Carolina AIDS Action Network. “But it’s still taking a pill every day.”

By comparison, forms of birth control that required less-than-daily upkeep, such as IUDs, became available just eight years after oral contraceptives were approved for use in 1960.

“If I told women that the only contraception you can have is a safe, effective one-pill-a-day, for the rest of your life, some people would say, ‘I need something different,’” said Wohl. “HIV’s no different in many ways.”

People may stop taking their daily pills for HIV for a variety of reasons, some that clinicians hope the injections will help address.

Social and internal stigma plays a large role, researchers found. People living with HIV may experience stigma from those around them, including people they live with who may see their bottles of medication. Individuals who may travel abroad to countries where there is more hostility towards people with HIV may leave their medication at home to avoid revealing their HIV status to airport security. A person may have internalized negative stereotypes about HIV and feel guilt or shame over having the virus.

“For some people, taking that pill every day reminds them of that aspect of their stigma,” said Wohl. “A really interesting finding of the work that’s being done with long-acting [injectibles] is that people feel the relief from that constant daily reminder of ‘I’ve gotta take my HIV medicine.’”

Some people’s lives may be more chaotic or their schedules more irregular, making it more difficult to adhere to the regimen of a daily pill.

“For people who work nights or have to travel a lot for their work, remembering to take a pill every day is another thing that they have to do, when the other parts of their life may be moving a lot,” said Adeleke. “Specifically in North Carolina, another issue when it comes to having people that stay in treatment is a lack of transportation — with the pill-form medication, folks have to see their doctor, get the labs done before the visit, and then get their medications. Trying to get a ride and make sure that all of that can happen in one go doesn’t always work.”

For people who lose insurance or individuals exiting or entering jail, the long-acting effects of the shot may give more leeway to find their next step, according to Wohl.

“I think having more options that provide more flexibility for folks is always better,” said Adeleke. “That’s going to help in the broader work to ending HIV.”

One of the two shots approved, cabotegravir, has also been found to be as effective in preventing HIV as PreP, a pill therapy.

Wohl described the preventative treatment, which would need to be taken every two months, as a potential “game-changer” in preventing the spread of the virus. Currently, the FDA has only approved Cabenuva as a treatment for people who already have HIV.

The long-acting injectable shots are not for everyone, Wohl said.

“The other thing is, this is not the greatest therapy for somebody who has trouble coming into the clinic,” said Wohl. “If you don’t take your medicine, that’s one thing. But if you don’t adhere to your clinic appointments where we give you the shot, those levels can slowly drop over time, and that virus will start to replicate with low levels of drug. And that’s how you cultivate resistance.”

There’s another caveat. While developing a resistance while taking pills used to treat HIV is “extremely rare,” there may be a slightly higher risk when taking a long-acting shot.

“A handful of people in clinical trials have developed resistance to one or more of the medicines, so it may not be as bulletproof to resistance as some of our single tablets, or similar oral medicines that we’ve got right now,” said Wohl. “It’s rare, but not extremely rare. So there’s a little bit of a trade off.”

Beginning of a future

When it comes to cost, advocates in North Carolina said they don’t anticipate the monthly shots being more expensive than daily pill treatments.

“There should not be a concern; it should absolutely still be covered at no cost to the patients who can’t afford it,” said Adeleke. “But if that is not the case, that’s definitely something that we would have to do some advocacy on.”

Wohl said equity is something companies offering long-acting injectables will need to consider, not just in the United States, but abroad.

“Any innovation of HIV therapy has to be inclusive — to people of color, to people who are living in poverty or have been marginalized, and to people who live in rural areas where they’re far away from a person who might be able to inject them,” he said. “We need equity here in the United States, but certainly in other parts of the world as well. That’s gonna be key: that these companies figure out how to not make this just for the rarefied few.”

Currently, only the pharmaceutical ViiV Healthcare can administer Cabenuva.

Shots to treat HIV that are effective for longer periods of time — that only need to be taken bimonthly or biannually — may be approved in the future.

“This is the beginning of a future of long-acting,” said Wohl. “We are going to see more candidates of medicines that work for longer time periods, maybe even six months. It’s just a really exciting new way to deliver HIV therapy.”