Please ensure Javascript is enabled for purposes of website accessibility NYC is clawing back less money from schools that lost enrollment, though some still face big deficits - THE CHICAGO HERALD Press "Enter" to skip to content

Home » NYC is clawing back less money from schools that lost enrollment, though some still face big deficits 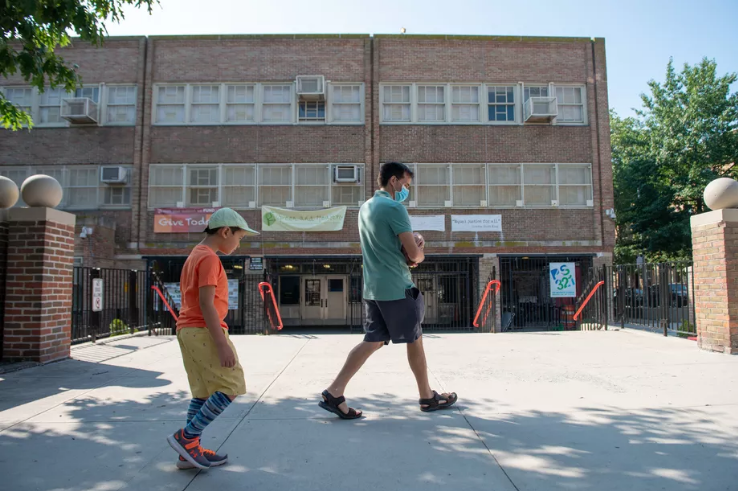 NYC is clawing back less money from schools that lost enrollment, though some still face big deficits

Schools that saw steep enrollment declines won’t have to forfeit as much of their budgets as originally feared, education department officials told principals on Monday.

The education department is reducing the amount of money schools owe this year by 25%, said a letter to school leaders acknowledging the pandemic’s impact on student attrition.

“As always, schools can request funding for additional staff if they need it, and for this year only due to pandemic-driven enrollment fluctuations, we are also able to make restorations to school budgets that experienced enrollment loss to help support them during these unprecedented times,” education department spokesperson Katie O’Hanlon wrote in an email.

In a typical year, schools can be required to forfeit some of their budgets mid-year if there are fewer students on their roster than the city projected. But enrollment dropped much more sharply than in previous years, falling by 4%, or roughly 43,000 students, according to city data.

The department’s decision to claw back less money offers relief to school leaders, some of whom wound up owing hundreds of thousands of dollars that would have to be repaid over time. And schools that were given additional money because they enrolled more students than expected won’t have to give it back, according to the letter.

Still, some union leaders said the department’s decision doesn’t go far enough and that schools should not be required to forfeit any funding this year, particularly as the fallout from the pandemic and pressure to reopen buildings required more resources from individual schools.

Next year schools will continue to have enormous challenges to meet students’ needs and provide even more individualized support in “meeting kids where they’re at,” whether that means addressing the loss of relatives, economic instability or other social emotional and academic needs, said Mark Cannizzaro, president of the union that represents principals and other school administrators.

“Not only can they not give money back,” he said, “they’re going to need more money.”

His union has also been pushing the education department to hold schools harmless and will continue to urge the city to forgive 100% of what the schools owe.

The vast majority of schools across the five boroughs lost students, though some schools lost more than others. One in four lost at least 10% of their students, with the greatest declines coming in pre-K and kindergarten. Brooklyn’s Brownsville neighborhood (District 23) had the highest percentage of schools with large declines, followed by Harlem’s District 5.

A small group of schools that serve wealthier families lost a significant portion of their enrollment, but overall, far more low-income students have left the system.

Schools Chancellor Richard Carranza previously indicated that the department was interested in holding schools harmless, but that it would be too expensive to hold budgets steady without additional funding from Albany. He has also suggested that keeping budgets flat would disproportionately benefit wealthier schools, though the education department has not provided data to support that claim, nor have officials provided a school-by-school breakdown of what is owed.

Elected officials, led by Brooklyn Council members Brad Lander and Mark Treyger, asked the chancellor last week to allow schools to hold onto the money, especially as this year required additional staffing at many schools to cover smaller in-person classes as well as remote learning. Moreover, they’re concerned about what it will mean for next year if the schools start out with large debts hanging over them.

“The money you are demanding back would require that they cut teachers, social workers, arts specialists, and more from next year’s budget,” they wrote, “robbing their students of the educational, social, and emotional learning supports that will be needed for what you and the mayor have said will be one of the most urgent educational years ever.”

This article was originally posted on NYC is clawing back less money from schools that lost enrollment, though some still face big deficits