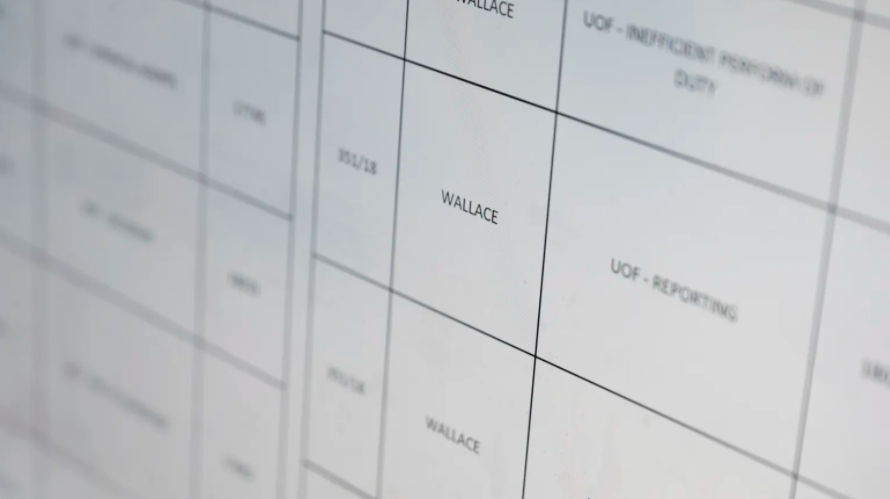 Four years ago on a December morning inside the grim, granite walls of the Manhattan Detention Complex, correction officer Lawrence Wallace and a colleague applied an “upper body control hold” to subdue a detainee.

The officers said the inmate triggered the fight after he became “irate” and “advanced” towards them on Nov. 24, 2017, according to an initial internal city Department of Correction report.

But a little less than two years later Wallace pleaded guilty to an internal department excessive force charge for his role in the violent incident, according to newly released Correction Department records made public after state lawmakers repealed a personnel records law known as Civil Rights Law 50-a.

The encounter was not an isolated incident for Wallace.

The nearly 15-year department veteran, who earned $97,351 in 2020, was disciplined for more misconduct incidents than any other currently active jail staffer during the nearly two-year period for which department officials published data, according to an analysis by Gothamist/WNYC and THE CITY.

He also made false or inaccurate statements in official paperwork and department interviews about at least three of the encounters, the reports show.

“You don’t want to have an officer who has repeatedly used excessive force against inmates in your department,” said Florence Finkle, who led the department’s investigation division from 2010 until 2014.

“You risk that he will go out and use excessive force again, and seriously injure someone, and open up the department and taxpayers to liability,” she added, noting she was not familiar with the details of Wallace’s case.

The state legislature repealed the 50-a law last June after mass Black Lives Matter protests following the police killing of George Floyd in Minneapolis. But the release of the personnel records was delayed until earlier this year because of court challenges by unions representing firefighters, police, and corrections officers.

The Correction Department’s data is limited to the last name of each officer, only substantiated cases, and just a few lines describing the wrongdoing.

But the records offer a glimpse into the department’s disciplinary system.

Of the 272 officers who received disciplinary sanctions between Jan. 1, 2019, and Aug. 21, 2020, the data shows nearly three-fourths logged one disciplinary incident during that period. (Some of these findings stemmed from incidents several years earlier but were only adjudicated after 2019.)

But a few officers, like Wallace, faced discipline for multiple violations, like excessive force and misleading statements, and received what inmate rights’ advocates consider to be fairly light penalties.

Of the 11 officers with at least three misconduct incidents in that 18-month period, for example, the data shows only one was suspended. That officer was punished for three excessive force findings — including one for kicking an inmate who “posed no threat” to staff — and then lying about it to investigators.

The rest received lighter forms of discipline, including being placed on probation and the loss of vacation or other compensated days.

For example, Wallace — who topped the list with his eight findings — was docked for 55 vacation or otherwise paid days and was put on probation for two years.

Inmate advocates say that more needs to be done to punish officers who abuse detainees.

“The 50-a data shows that the so-called reforms at DOC is just rhetoric,” said Darren Mack, a co-director of Freedom Agenda at Urban Justice Center.

“And it’s evidence of what advocates and survivors of Rikers already knew. That the brutality and violence will not be eliminated until there’s a total dismantling of DOC.”

The Department of Correction defended its disciplinary system and said it would be releasing additional personnel records on a rolling basis.

“Releasing our disciplinary records marks another step forward for us when it comes to transparency,” said DOC Press Secretary Jason Kersten. “All discipline is prescribed by civil service laws and occurs according to due process.”

A Matter of ‘Control’

In the first half of 2020, a federal monitor overseeing the department, with help from department staff, reviewed nearly 3,000 use-of-force incidents captured on video.

Of those, correction officials determined just over 500 constituted procedural violations, and another 200 plus were deemed to be avoidable, the report said.

But few officers were ever seriously punished, with only 36 staffers suspended for force-related misconduct during that period, department records show.

The department’s Investigation Division handles the initial probe into allegations against officers. When cases are substantiated they are then handled by the Trials and Litigation Division.

One former top city jail official argued that officers are frequently unfairly blamed for trying to break up fights.

“There are just some inmates who are antisocial, anti-rules and anti-procedures,” said

Jacqueline McMickens, who served as Department of Correction commissioner during the Koch administration.

“Officers are trained to control inmates,” she added. “It’s called care, custody and what? Control.”

McMickens and other former jail officials noted that officers are sometimes forced to make quick decisions under duress.

Benny Boscio Jr., the president of the union representing front-line correction officers, said that his members “are constantly second-guessed for every action they take, including in situations that involve split-second decisions that can make the difference between life and death.”

Some officers are involved in more use-of-force incidents because they are assigned to dangerous areas or specialized units, according to union officials.

The department also has strict rules for how pepper spray can be used.

“Some of it is as simple as you were two feet away and not three feet away or used three bursts instead of two bursts,” said Mark Cranston, a former acting commissioner of the Correction Department at the start of the de Blasio administration. “In the middle of the scrum, it’s hard to calculate that.”

As for Wallace, he’s assigned to the department’s central visit office away from contact with detainees. The unit is similar to the teachers’ so-called rubber room, since visits have been cancelled since the pandemic hit last spring.

He does not have any pending charges.

One allegation of abuse against Wallace dates back to 2015, court records show.

Arthur Ceasar charged that Wallace beat him up inside his cell in the Manhattan Detention Complex on Aug. 31, 2015, according to a lawsuit filed by the former detainee.

Ceasar said the dispute began when officers took away his Nike sneakers to replace them with department-issued shoes that were two sizes too big.

“I didn’t want to walk around like Bozo the Clown,” Ceasar recalled.

Ceasar said he refused to wear the shoes and tossed them out of his cell near where Wallace was posted.

Ceasar says he threw them right back — prompting Wallace, and another officer, to charge into his cell, according to the lawsuit.

Wallace began screaming “stop resisting!” and then punched Ceasar in the face and threw him to the floor, placing his knee on his neck, the lawsuit alleged.

Ceasar, who was 48 at the time, says he was hospitalized and given a neck brace after the incident. The legal case was dismissed after Ceasar, who was then homeless, missed a court filing.

It is unclear if the alleged abuse was ever investigated by jail supervisors. The Department of Correction has refused to release Wallace’s complete disciplinary record and did not respond to questions about the incident. Ceasar said he was never questioned by investigators.

The former detainee believes Wallace should be fired.

“A lot of these officers, they try to put fear in people’s hearts to make them be afraid so they can take advantage of them,” he said. “Because once they know you’re afraid, they know they got you. You ain’t gonna say nothing and they’re gonna get away with it.”

Correction officers are rarely fired, records show, with just 16 dismissed since 2016. Jail officials point out that officers faced with a firing will often resign or retire beforehand to protect their pension. Additionally, 205 probationary officers, who are not entitled to a disciplinary hearing, were fired over that same period.

A Backlog of Cases

The department has been trying to revamp its disciplinary unit for years at the behest of the federal monitor, Steve Martin.

City correction officers are entitled to have their cases adjudicated by an independent administrative judge.

But the process can take months, or even years, to resolve, records show.

There are currently 117 active cases waiting to be dealt with at the city’s internal trial bureau, the Office of Administrative Trials and Hearings (OATH).

The department’s Investigation Division cleared an 8,000-case backlog in the last year, according to Kersten.

That was too late for some cases.

Over the first six months of 2019, officers escaped possible discipline in 2,001 instances because probes dragged on past an 18-month statute of limitations, according to the federal monitor’s report covering that period.

A new backlog may be on the horizon. Currently, 3,362 cases are pending to be presented at OATH, although many of them are expected to be settled before ever going in front of an administrative law judge.

This article was originally posted on NYC Jail Officers Lash Out at Inmates With Few Consequences, Discipline Records Show