Please ensure Javascript is enabled for purposes of website accessibility One School District’s Struggle Over Public Health, Parents and Politics - THE CHICAGO HERALD Press "Enter" to skip to content 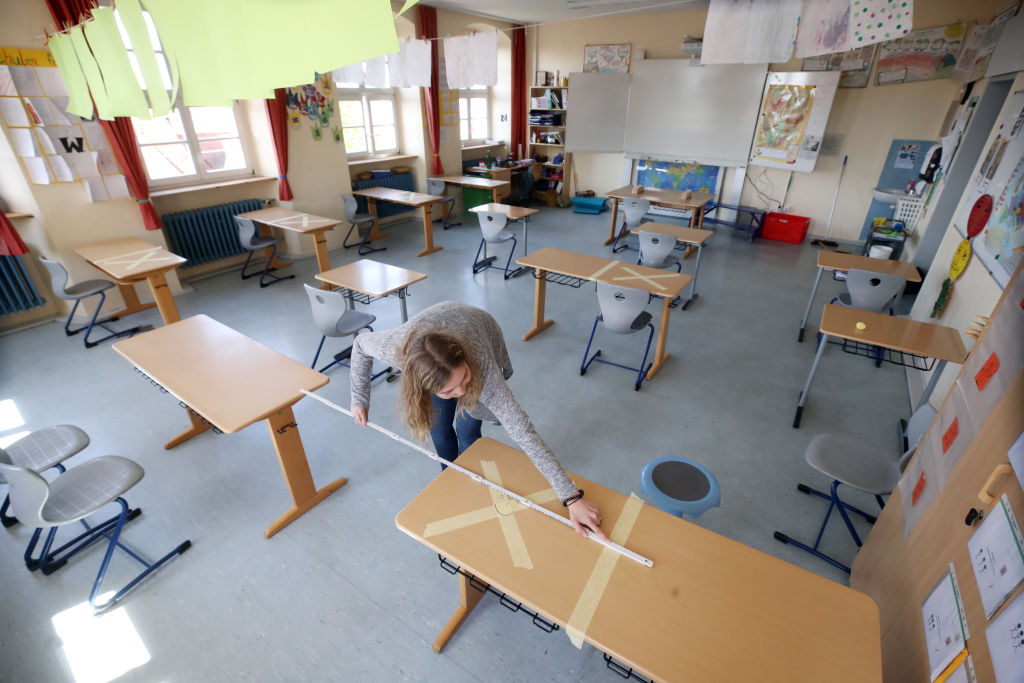 One School District’s Struggle Over Public Health, Parents and Politics

Brandon Dell’Orto listened to the comments and complaints as the school board meeting dragged on hour after hour. Many parents were angry. Their kids were sad, bored, borderline depressed, fed up with a school model that didn’t allow them to be on campus every day. The parents wanted schools open. They demanded it.

Dell’Orto, a history teacher and teachers union leader in the Roseville Joint Union High School District near Sacramento, knew it wasn’t so simple. Many of the district’s classrooms couldn’t meet new state guidelines for resuming safe on-campus instruction. Further, 4 in 5 teachers in his union, the Roseville Secondary Education Association, opposed a full return to the physical classroom. They feared for their safety and that of some students, and many preferred to wait to be vaccinated before once again teaching in person.

Dell’Orto also knew that the protocols and opinions were unlikely to affect the ultimate decision. In the most recent election, Roseville voters had chosen three school board members who campaigned primarily on a message of reopening classrooms full time. It was clear, Dell’Orto said, that the new members were going to do exactly that.

California has 1,037 public school districts, each empowered to make its own decision about reopening schools during the covid-19 pandemic. Politics and public health are at war in many districts, including this one. So, while classrooms had been closed nearly a year in neighboring Sacramento County, the Roseville schools were going the other way.

The night of the meeting, Jan. 26, the school board rushed out an online survey to parents. Within three days, 94% of those households had responded, and the results were clear: They overwhelmingly wanted the schools to reopen five days a week for in-person instruction. On Jan. 31, the board approved such a reopening, effective immediately.

“We are not going to move backwards,” Lisa Mendenhall, parent of a student at Oakmont High School, had declared at the board meeting.

For years, Dell’Orto said, Roseville’s teachers have enjoyed a good relationship with the district, its families and the school board. But when it came to discussing the continuation of a hybrid model versus a full return to campus, the teachers union, which had proposed the hybrid, was largely ignored. During the 5 ½-hour meeting on Jan. 26, Dell’Orto said he was allotted 90 seconds to weigh in.

“We really try to be a pragmatic, productive partner,” he told California Healthline. “Lately, though, everything has gone to ‘Pick a side.’”

“This is why the country is in this situation,” Dell’Orto told the board. “Because people don’t want to follow guidelines.”

The board approved a back-to-school order even though three of the six high schools in the district had been unable to meet guidelines for keeping the recommended distance between students. In a previous attempt at reopening, following winter vacation, one of the schools, Roseville High, had to quickly shut down after a covid outbreak forced hundreds of students and staff members into quarantine.

Jess Borjon, the district’s interim superintendent, told California Healthline that administrators were “confident that we can arrive at the minimum distance” of 4 feet between desks allowed under new California Department of Public Health guidelines issued in mid-January. The Roseville High outbreak, he said, “was a reminder of how diligent we have to be to stay open.”

Roseville, with a population of about 141,500, is a mostly suburban city northeast of Sacramento. Unlike Sacramento, though, it’s in largely rural Placer County, which sprawls all the way to Lake Tahoe and has voted for the Republican candidate in five straight presidential elections.

Placer County, with nearly 400,000 people, has tended to resist health and safety protocols during the pandemic, with many businesses and churches defying orders to close.

Last summer, the county supervisors, unhappy with their public health officer’s reluctance to arbitrarily terminate covid emergency declarations, stripped her of that authority, then lifted the emergency themselves. The officer, Dr. Aimee Sisson, promptly resigned and was hired to the same position in nearby Yolo County, whose supervisors have closely followed her guidance and kept schools closed.

In fall’s Roseville school board election, one returning member and two new candidates were elected on the promise that they would reopen schools. Newly elected Heidi Hall is listed as a Placer “county coordinator” of the statewide petition to recall California Gov. Gavin Newsom.

Hall blamed the Democratic governor for the confusing and shifting state guidelines for reopening schools. At the Jan. 26 meeting, she declared that California’s distancing recommendations were “not making a difference in these positivity rates” and that it was “irresponsible to listen to this guideline coming down that is not based in any science.”

In fact, the CDPH guidelines on reopening schools closely follow protocols produced recently by the Centers for Disease Control and Prevention. That set of guidelines stirred vigorous debate among experts, some of whom said it would be impossible to reopen schools while following them. President Joe Biden has repeatedly said he wants most U.S. schools open by the end of April. While children rarely get seriously ill from covid, their ability to transmit the disease remains a subject of intense interest, and the CDC recently found that teachers and staffers may act as vectors of covid in schools where distancing recommendations aren’t followed and masks are not worn.

None of it mattered in Roseville. The three newly elected board members voted against a motion that would have opened elementary schools (where children are easier to manage) and kept the high schools in the hybrid model, with some students coming to campus on selected days. That would have allowed its six high schools, with a combined enrollment of more than 10,000, to more closely follow the CDPH guidelines. Their votes defeated that motion, 3-2. They later voted to return to full on-campus learning. (None of the three responded to questions posed by KHN.)

The health department’s memo calls for a distance of 6 feet between students’ desks unless, after a “good-faith effort,” such a distance is determined to be impossible. In that case, 4 feet is allowed as the absolute minimum. Three of the Roseville district’s schools were not able to meet the 4-foot requirement, either. They opened anyway.

Doug Ginn, who teaches science at Oakmont, noted that the heating system in his lab “only brings in 10% fresh air” for classes that often have 40 students or more. Ginn’s solution on a recent day was to open the front and back windows and turn on a fan to keep fresh air moving through. It was 35 degrees outside when school began, he said.

“I’ve already lost two students [who returned to remote learning] because they don’t feel safe,” said Ginn. “We do everything we can, but for classes like labs where being there in person is so critical, there are only so many ways to modify a crowded room.”

As the district scrambled to redesign classrooms to meet safety mandates, students were already back on campus. Jennifer Leighton, principal at Granite Bay High School, told families in an email shared with The Sacramento Bee that “any form of distancing will not happen — sorry — classes have been large and could likely grow since 300 more than we’ve had are planning to return.”

Borjon said the suggested distancing guidelines weren’t practicable if all the students were on campus for all their classes.

“The spacing issue in full classrooms is a real concern for us, and is at the forefront of our thinking,” the superintendent told KHN. “We share the concerns of teachers, students, parents and staff regarding classroom safety.”

But most parents remain viscerally opposed to the hybrid model. “It does not work. It’s a failure,” said Mark Anderson, whose son attends Oakmont. Added Jennifer Scott, parent of a Granite Bay student, “It makes no sense, as this pandemic is coming to a tail end, that we would go backwards.”

With Roseville schools open, teachers have had to adjust. The schools continue to offer a Zoom option for students to remotely monitor instruction if they don’t feel safe returning to their campuses. So far, though, school officials said they are gaining students on campus with each passing week, which further strains their ability to even approach the state guidelines for a covid-safe environment.

“We’re professionals. We were asked to try to make this work, and so we’re trying to make it work,” said Ginn, whose science classes had to be moved to larger areas, including the library. “It’s not in a teacher to just say no. These are our students you’re talking about.”

This article was originally posted on One School District’s Struggle Over Public Health, Parents and Politics