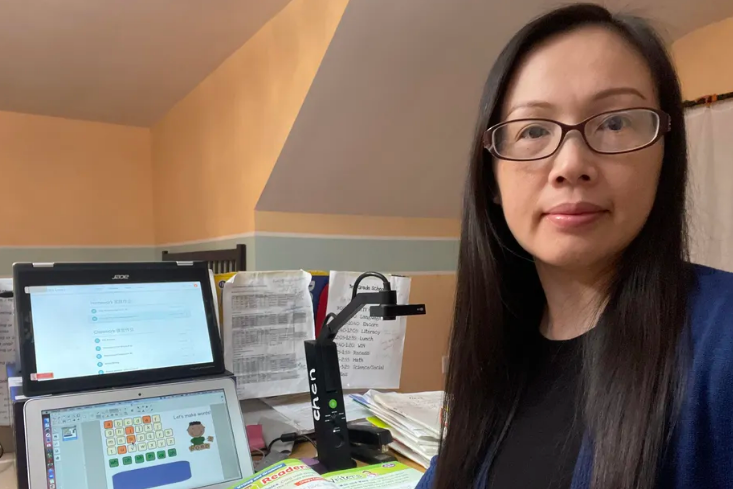 Chalkbeat Philadelphia navigates the literacy terrain as educators, parents, and policymakers have become increasingly concerned about our youngest students and their ability to read amid COVID-19.

Even virtually, Dina Palermo looks like she is playing charades when she is teaching.

One minute she is pointing to her ears, showing that it is time for listening. The next she is miming emotions to explain a read-aloud book. Teaching in her English as a second language classroom of first graders at Southwark School has always been physical, but for a year her body language has been confined to the boundaries of a small screen.

“When it is two numbers being put together, I’ll emphasize my two hands coming together. The numbers get bigger, I make a big wide circle. The kids start to follow that routine,” she said. “So I model all these things, literally physically, and I have the kids do it too, looking at me through the Zoom and, you know, then they kind of start to get it.”

Teaching young learners in the pandemic has been challenging for many educators, but those instructing English language learners virtually face even steeper obstacles.  These students may struggle with remote learning due to lack of access to technology, language barriers, and the inability to practice their language skills with classmates.

In Philadelphia, where about 13% of the district’s nearly 120,000 students are learning English, some teachers say these students feel more isolated than their peers and often struggle with less support from parents who, despite their best efforts, are not necessarily equipped to help with school, either because of language barriers or having to work outside the home during a pandemic. And even as elementary schools began welcoming back younger grade students, some immigrant families remain hesitant to return.

A Philadelphia School District report released in January showed that students learning English saw slightly smaller declines than their peers on a math and reading assessment comparing winter to fall 2020. But the overall gap between the groups remained stubborn — English language learners scored on average about 15 percentile points lower than their peers, largely consistent with the achievement gap before the shift to virtual learning.

Parents who speak a language other than English at home point to numerous aspects of remote learning as being difficult, from trouble-shooting technology to making sure a student is in the right virtual classroom to voicing concerns over their children’s performance.

Guiling Huang, whose family runs a beer distributor, says that it has been hard to oversee her children’s virtual education because she did not understand the online programs. Huang’s primary language is Chinese. The mother of a kindergartener and a third grader at McCall Elementary School, Huang left her job with the family business to help support her children’s learning, but she feels limited in how much she can do given the language barrier.

Still, she did not choose to immediately send her children back to the classroom when the school shifted to a hybrid model in late March, in part because of fears about the virus but also reports of anti-Asian violence across the nation.

Teaching English language learners also became more challenging with virtual learning, as common strategies to bridge the language gaps can be difficult to translate to a screen. “They cannot use body language as a cue to interpret the language that I’m trying to teach them,” said Shuxin Chen, who teachers English language learners at McCall. “I use a lot of physical responses, a lot of games or actions to show them the content, I teach language through activities, but now, I’m limited with that,” she said.

Students often get more practice in oral language skills just by being social and physically in the same space as English-speakers, in addition to the opportunities for “productive talk” in the classroom. By contrast, reading and writing instruction happens more formally. Chen fears that the solitary nature of virtual instruction will not only leave students emotionally isolated, but without the sustained exposure to oral English skills that her students would normally get in school naturally.

Miulcaeli Batista, the Philadelphia School District’s Executive Director of Multilingual Curriculum and Programs, agreed that virtual learning was particularly challenging for district  students learning English. “The district recognizes that this segment of our student body and their families is very diverse, and that their access to and level of comfort with technology varies depending on many factors, such as reliable connection to internet service, experience with virtual platforms, and English fluency,” she said.

Batista said that there has been a significant effort to provide information and other resources such as a multilingual hotline in nine of the languages most commonly spoken by Philadelphia families. They are also working on voice overs in languages other than English for “how-to” videos focused on skills like how to use Google Meet, Google Classroom, or Zoom. Batista said that her office has also worked to strengthen ties with community groups such as the Philadelphia Refugee Education Collaborative to reach immigrant and refugee families.

The younger the student, Chen says, the more challenging it is. The kindergarteners she teaches have what she calls a “double burden” when learning phonics, as they both try to learn sounds but also vocabulary to contextualize those sounds.

“If the teacher says to look at the picture of the apple and tell me, what’s the beginning sound, every other kid will know that that object is an apple and they will make an ‘Aaa’ sound for the letter A,” Chen said. “The ELL student doesn’t know what that thing is called in English. They have to learn the name of the object at the same time as they have to learn the letter sound. It is a significant mental burden.”

Teaching the youngest students to write is also more complicated online, teachers said. Palermo says she generally likes to teach writing as a mini-lesson to a whole group then work with students individually. “You can see their work, you can make changes, you can edit with them. That is something that is so hard virtually because all I can do is ask them to hold up your paper. Then you have the issue of ‘Oh, I can’t see your paper. Can you hold a little closer? Nope that is too close, it’s blurry’” she explained.

While teachers have come up with workarounds for computer-based instruction, typing is tricky with kindergarteners or first graders learning letters. Meanwhile, drawing on a screen with a cursor does not provide the same fine motor skills as writing with a pencil.

And it is a process that happens at different speeds for different students — but remote learning makes differentiation a challenge. Normally there are times of the day that a teacher can check in with a student who may not understand what is going on, or a student who might be advancing more quickly can be given variations of activities that are more challenging. But in virtual learning, teachers are limited in their one-on-one contact with students and the variations they can provide.

Palermo also tries to create consistency for her students learning English, but maintaining routine has been hard in a year of unforeseen issues and last-minute changes to schedules. Philadelphia elementary schools tried multiple times to reopen before finally allowing some early grade students to return last month.

Even with the challenges faced by these students with remote learning, the teachers that Chalkbeat interviewed said that families of students learning English have been more hesitant to return their youngest children to the classroom than families of students in general classrooms. In the first opt-in period for hybrid learning, none of Palermo’s students at Southwark were enrolled to go back to the classroom. Similarly, Chen and her team lead, Iwa Cliggett, said that only one of the English language learners at McCall opted-in to the hybrid model in the first round. Both have started to see this change with more rounds and increased vaccinations, but still not at the same rate as English-speaking families.

Huang was one of the parents who said she wanted to wait to send her children back to the classroom. She cited three reasons: concerns about the virus, the difficulty of having different hybrid schedules for her children in different grades, and fear of rising anti-Asian violence across the country.

Both Chen and Huang said that they had spoken to other Asian families across the city who have concerns about their children being subject to bullying given the recent rise in violence against Asian Americans and Pacific Islanders. Chen and Huang are both originally from China.

Palermo, whose students mostly come from Spanish-speaking families, said that these families have also been more hesitant, but mostly because they live in multigenerational homes where family members might be more vulnerable to the virus. Additionally, most of the families she works with are essential workers and already worry that their risk of exposure is higher.

“People are fearful for a lot of reasons,” said Palermo. “America has been a scary place for immigrant families over the past few years, and the pandemic has made it even scarier”