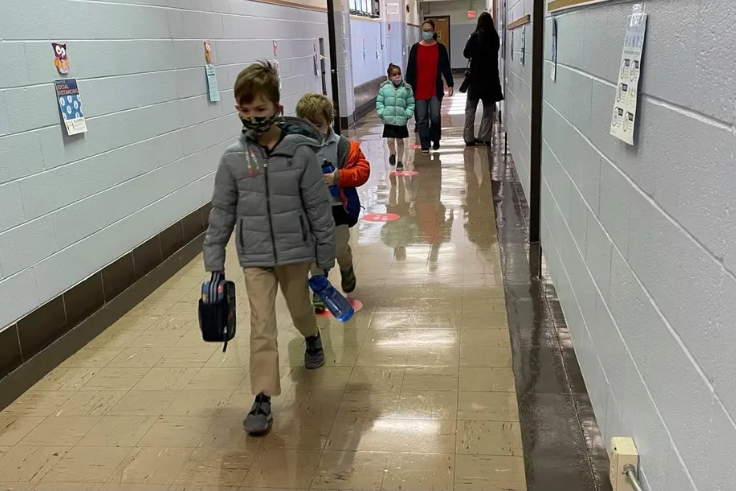 Despite reporting an increase in COVID-19 cases in the city, Philadelphia Health Commissioner Dr. Thomas Farley said Tuesday that he still recommends schools stick with the relaxed three-foot distance recommended recently by the Centers for Disease Control and Prevention.

“We’re following the CDC guidance on schools,” he said, noting that the federal guidance doesn’t permit the shorter social distancing in middle schools or high schools if community case rates are high, as in Philadelphia.

In counties where the coronavirus transmission rate is still considered “substantial,” which this week includes Philadelphia, students should maintain the earlier guidance of six feet apart unless students are kept in small cohorts where they interact daily with the same small group of other students.

The guidance also continues to maintain the six-foot rule in all common areas, such as lobbies and auditoriums, and between adults in the building and between adults and students. In addition, six feet should be maintained for certain activities for which masks can’t be worn, such as eating, and those that require “increased exhalation, including band, singing and sports.”

Philadelphia Federation of Teachers President Jerry Jordan, who has been at odds with district leadership over the safe return of staff and students said the agreement between the district and the union to allow a return to school buildings is based on adherence to a stringent set of protocols. Jordan has said the district needs to immediately address its notification and tracing protocol and provide a standardized reporting mechanism, including a publicly accessible dashboard.

“Of course, the increase in case counts is significant and further underscores the urgent need for a publicly accessible dashboard regarding school transmission,” Jordan said in an email to Chalkbeat Tuesday. “We cannot say at this time whether the increase in case counts is at all correlated to in-person learning, because we just don’t have the data we need to assess this. It is imperative that the district release case counts within school buildings and do so in a public and transparent manner, and it’s outrageous that they have yet to do so.”

As of Tuesday there have been 477 additional confirmed cases of COVID-19 in Philadelphia, Farley said. But he couldn’t break down the numbers, and when asked about a dashboard for students and teachers, he said the district would take responsibility for posting the dashboard on its testing in schools.

Right now, the only updates provided to the general public are weekly reports given by Mayor Jim Kenney and Farley, every Tuesday. The weekly reports also are on the city’s website. But to break down cases happening at schools parents and teachers are forced to dig deep for answers. Two groups, Parents United for Public Education and the Caucus of Working Educators, created their own public tracker two weeks ago to provide teachers and families with information as some students return to schools.

The dashboard now indicates 23 cases were reported last week with 78 cases reported since the reopening of schools earlier this month.

“The large number of students involved and the high rates, it’s not a surprise the number of cases occurring with students,” Farley said. “We have procedures for what you do when you have someone who has tested positive as far as quarantine and isolation. They need to follow those as close as possible.”