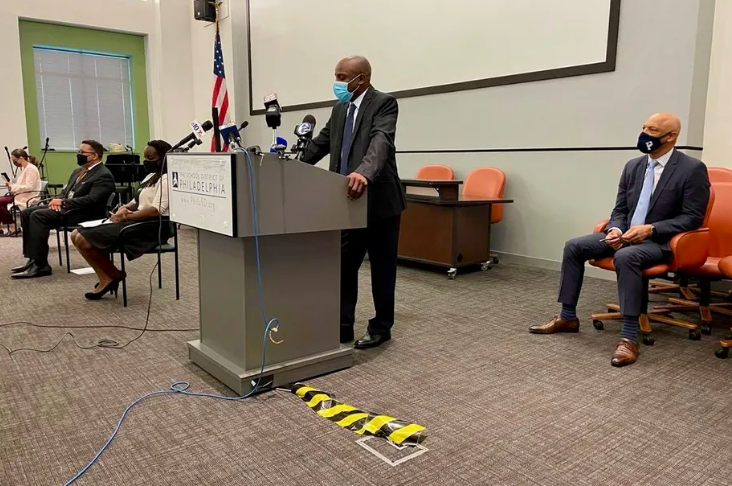 He described himself as a “troubled youth” when he attended Strawberry Mansion High School. “Mentors helped me fill that void when my father wasn’t around.”

Smith joined Superintendent William Hite Thursday as the district announced plans to expand one of its mentoring programs, which was originally designed to help support the needs of young Black male students through positive engagement with Black adult males. This year, it will expand to more schools and include mentoring for Black girls.

Last year, the district created L.E.A.D., or Leaders Encouraging Achievement and Development,  to strengthen intergenerational relationships among Black men and boys, equip Black male students with life skills, and inspire and empower Black boys to believe in themselves.

The district’s Office of Strategic Partnerships, which developed the program, said that 62 schools had expressed a critical need for mentoring students, and many of those specifically requested mentors for Black students. The mentoring program pairs Black students with Black school police officers.

“When the principals talk, when we talked to leaders in their schools, one of the things that they wanted was to ensure that there were more individuals in schools who could engage with young people,” Hite said.

According to the district, all of the district’s 325 school safety officers received mandatory mentor training as part of the Office of School Safety’s work to re-envision its role within school buildings.

“Black male mentors are continually requested in many schools across our district, and we’re happy to expand to new schools and continue this important work,” said Vicki Ellis, executive director of the Office of Strategic Partnerships.

“Many of our officers were already doing this in some capacity, but now it’s part of a formalized program that can reach more students,” said Kevin Bethel, chief of school safety for the school district. “Our officers who are engaged now are really enjoying it and truly believe in their work that they are doing.”

Bethel, who is a retired deputy police commissioner in the Philadelphia Police Department, addressed recent concerns about police brutality toward Black people and the possible mistrust some Black students may feel about safety officers. Just this week, police in Minneapolis have clashed with protesters over the police killing of Daunte Wright following a traffic stop.

“It benefits policing as well,” Bethel said, “because if they see somebody who’s in a safety position, treating them in a positive manner, then they also convey that to our law enforcement colleagues.”

Hite said the program is also connected to the effort to train and hire Black male teachers. Just over half the students in the school district are Black. Nationally, just 2% of teachers are Black men.