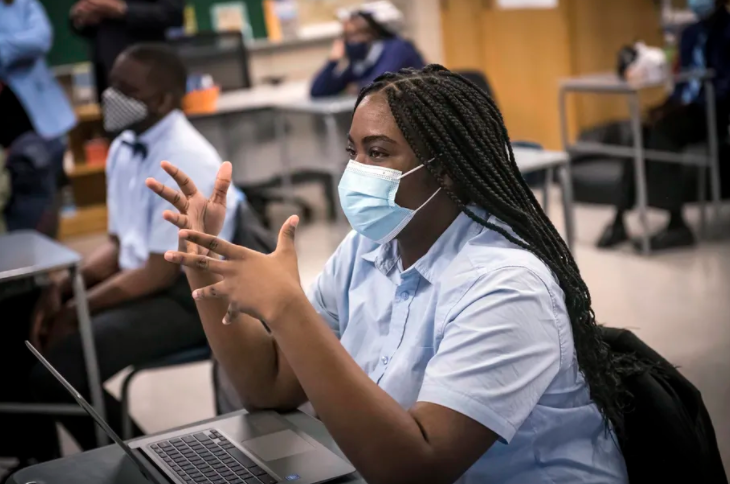 These students — from elementary, middle and high schools — can head back to their classrooms beginning April 26.

De Blasio previously said that elementary school students would be able to return before middle and high schools, as the younger grades can move to three feet of social distancing down from six feet, unlike the older grades. However, middle and high schools have enough room to welcome back their students while still maintaining social distancing at six feet, officials said.

The state this weekend approved the changed social distancing requirements based on recently updated guidance from the U.S. Centers for Disease Control and Prevention. (Though the safety protocols have changed, some elementary schools that have enough space will be able to maintain six feet of distance, the mayor said.)

With this new influx of students opting back into campuses, roughly 365,000 students will be eligible for in-person learning, representing about 38% of the city’s 965,000 traditional public school students, city officials said. That still leaves the vast majority of students learning remotely full time through the rest of the school year, though city officials have not presented a comprehensive effort to improve virtual instruction.

Because most families have opted for fully virtual instruction, many schools have been able to offer five days a week of in-person instruction to those who have returned to buildings.

City officials said students who are already learning in person would not see a reduction in the number of days a week they spend in brick-and-mortar classrooms. Some newly returning students, however, will only be allowed to return to buildings part time as space and staffing might still be an issue in some buildings.

“If we can increase the number of days we will,” de Blasio said. “Our goal is to continue getting more kids more days.”

Of the returning students, most were in pre-K through elementary school, with roughly 26,000 children in those grades signing up to return. About 13,000 high schoolers requested to go back in classrooms, followed by approximately 10,000 middle school students and 1,500 children from District 75, which serves those with complicated disabilities.

This latest opt in window was the first time parents were allowed to switch to in-person learning since the fall, and many wrestled with decisions about whether to change their children’s learning environment this late in the school year.

Many families did not want to disrupt their children’s existing schedules — though some schools may now have to shift around teachers and students as remote classrooms shrink. Also, some families remain concerned about safety, as coronavirus infection rates remain relatively high. City officials have touted school safety, pointing to a recent study suggesting that in-school transmission during the months of October and November was extremely low.

The opt-in period coincided with an overhaul of the city’s approach to building closures. To avoid frequent shutdowns that have disrupted in-person instruction, the city got rid of the “two-case rule,” where two unrelated cases would close a building. Instead, four cases in separate classrooms that investigators can link to transmission within a school will cause a shutdown. That change was announced with less than 48 hours remaining for parents to decide if they wanted to return to classrooms.

De Blasio has indicated safety provisions will likely change significantly next fall, and that he’s committed to a “full” reopening in September where every student can get five days a week of in-person instruction or otherwise participate in a fully remote option.

“We’re well on the way to getting a huge number of people vaccinated,” he said. “I think September is going to be an entirely different environment. So we’ll be resetting all the rules as we go into the next school year.”

This article was originally posted on Roughly 51,000 NYC students to return to classrooms starting April 26