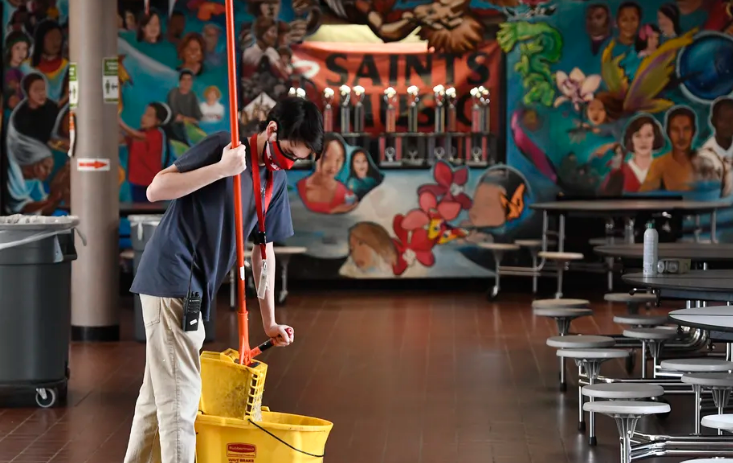 Before COVID hit, a stressful workday for school custodian David Diment might have involved setting up and cleaning up after multiple school events.

Now, a hard workday means cleaning every inch of the building after a COVID exposure.

“Before it was stressful,” Diment said. “We had a lot to get done, but it wasn’t like if we don’t get this done we run a high risk of getting or letting someone else get a deadly disease.”

The 25-year-old custodian is part of a six-person team responsible for keeping Golden High School in Jeffco safe for students and staff.

A year after the pandemic began, Diment described how the job has become more stressful, enough to push some of his colleagues out. It’s a front-line job that many forget about, he said.

Besides possible risks, Diment said there are different responsibilities now.

Tony Arnold, Jeffco’s director of custodial services, said he wouldn’t describe the past year as changing the job, but just some of the focus.

“We still do the same cleaning and we still clean in the same manner,” Arnold said. “We emphasize things different than we used to.”

As school districts and other workplaces have tried to bring more people back to regular in-person routines, much has fallen on custodians to keep environments safe. Although the virus that causes COVID-19 is now known to be airborne, many places have kept a focus on cleaning practices to prevent surface transmission.

Jeffco is starting to relax some cleaning policies regarding confirmed COVID cases, no longer requiring 24-hour closures. Arnold, who is in regular contact with health officials and staff, said there might be additional changes next year, but he’s reluctant to change routines for custodial staff this late in the year.

At Diment’s Jeffco school, every touch point has to be disinfected every night. That includes things like door handles and desks.

Diment said that collecting recycling also is a new responsibility for school custodians. It used to be something students at the high school took care of, but this year the work was passed on to school custodians.

Arnold said that’s not supposed to be the case. In fact, he said he just drafted a letter last week to school leaders hoping to remind them that recycling again should be handled by students and staff, and now that students are returning to schools full time, it’s “really good timing to re-engage that program properly.”

Even before the pandemic, vacancies in custodial positions were common, but Diment feels things have gotten worse.

Just last week, Diment was pulled from his school to cover vacancies at another Jeffco high school.

That, and the extra work, he said, means he often doesn’t finish his work within his scheduled shift. He now has to stay late to finish the job at least a couple of times per week.

“They are relying on us to go into these buildings,” Diment said. “It’s asking kind of a lot.”

Arnold said Jeffco currently has from 30 to 40 custodial vacancies out of 500 positions in the district. The district works with two temp agencies trying to fill open positions, before having to pull people from the high school teams or relying on overtime.

“Even with two labor agencies, they are not able to meet our needs,” Arnold said.

But things are better than a few months ago, Arnold said, as he was just able to hire about 30 people in the last month and a half. Applications are starting to come in, and he’s hopeful he’ll be able to fill more positions soon.

For Jeffco custodians, the workload in the past year has also included doing a deep cleaning of a school when confirmed cases prompt a 24-hour shutdown.

That deep clean involves electrostatic sprayers that leaders drop off at a school site so that custodial teams can spray then ventilate the whole school.

In the fall, as Jeffco and other districts had to pivot back to full remote learning as cases of COVID went up, district leaders cited problems in getting schools cleaned within those 24 hours as one of many operational challenges.

Arnold said that it wasn’t a problem with the staffing, but with the equipment.

“There were a couple of times we had so many schools that needed to be sprayed on a particular day, but we only have so many sprayers,” Arnold said.

The district just recently updated its policies to not automatically require 24-hour full closures of a school after a COVID outbreak. Custodial teams, however, will still be directed to the specific areas of a school that need to be more thoroughly cleaned “in addition to their normal disinfecting that occurs each evening in each building.”

Arnold said that he appreciates the district giving teachers cleaning supplies so they too can help keep classrooms clean between cohorts, rather than putting everything on custodial staff.

Diment himself hasn’t been sick, but he has been quarantined, including after his boss tested positive for COVID-19. The ordeal made him and his colleagues more aware of their risks.

At one point, he said, the district signed an agreement with the union that allowed custodians and other support staff to take six months off work and be able to return to their job afterward. But Diment needed his job and the money, so he never considered the offer.

Now, he said, he’s relieved that he and his coworkers have been fully vaccinated. But the year has still been challenging, and the work hasn’t stopped.

“We have been in the buildings pretty much since Day One, even when we didn’t have any information about this disease,” Diment said. “Sometimes people can lose sight of that.”