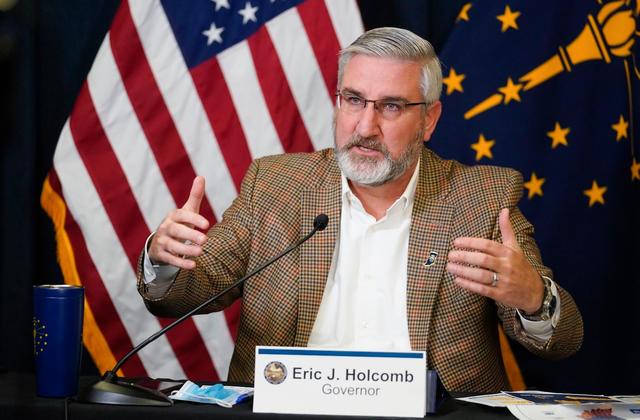 The Indiana state senator who authored a bill that checks the power of local health officials to unilaterally shut down businesses and churches during a health emergency defended his bill after the governor’s veto.

“When unelected officials are empowered to such a level as to limit religious liberty, shutter houses of worship, choose which businesses may operate and which must close, and impose fines on Hoosiers for living as free men and women, there must be a structural check and balance in place,” Sen. Chris Garten, R-Charlestown, said in a statement on Wednesday in defense of  Senate Bill 5.

Gov. Eric Holcomb announced his veto of SB 5 on Tuesday, writing in a letter to Senate President Pro Tempore Rodric Bray that during the COVID-19 pandemic, “state and local leaders struck a careful balance between protecting both lives and livelihoods” and that local health officers need to be able to “exercise discretionary authority.”

“Throughout the pandemic, we have seen great examples of collaboration amongst elected officials and LHOs [local health officers],” he wrote. “In fact, there were only rare instances of LHOs working in a vacuum or elected leaders and LHOs not working closely together.

The legislation creates an appeals process for local business owners, churches and other entities that have received an order from their local health department.

They would have seven days to appeal a local health official’s order to their county commission. The commission would then have 15 days to decide whether to hear the appeal, and another 15 days to hold the hearing. Commissioners would be able to allow the business or church to remain open while the appeal is pending.

In response to the governor’s veto, Garten said on Wednesday he will be “collaborating with his fellow legislators “to discuss a path forward.”

The governor’s veto comes a week after the General Assembly finished most of its work for the year. But unlike in most years, when it adjourns in March or April, the General Assembly did not adjourn officially, and so is now only in recess, with legislators expecting to return to Indianapolis in a few months to work on redistricting.

But staffers say legislators could potentially return at any time and meet to override the governor’s veto.

Both chambers have a supermajority of Republicans.

In addition to creating an appeals process, a county commission would have to approve the appointment of the head of the county health department.

In most counties, the top health officials is appointed by the local health board.

When introducing his bill to the Senate Public Policy Committee in early February, Garten had called it a “pro-local government, pro-local control bill.”

He said the COVID-19 pandemic has left many Hoosiers with no one to appeal to when they are suddenly subject to a local health order.

He said a county health officer who advised him on the bill had told him: “the amount of unchecked power that I have is scary…”

The chairman of the Senate Public Policy Committee, Sen. Ron Alting, endorsed the bill, saying it was a “very mild” bill that only “touches on the surface” of the issue.

He said the bill would “give the elected official somewhat of a voice” in decisions affecting local businesses, and referenced a Christian school in his district in Lafayette that was prohibited from baking apple pies that they sell every year as a fundraiser because of COVID-19 occupancy restrictions.

“Those pies support an incredible amount of money for that faith-based school, and they are icons in the community,” he told members of the committee. “You drive up and pick them up. But boy, we couldn’t do anything locally because the kitchens were too small.”

Another senator, Mark Messmer, R-Jasper, said local health officers appear to have “unlimited authority” an “answer to no one” and referred to a florist in Southern Indiana who was prevented by the county health department from selling bouquets, delivering them to customers curbside.