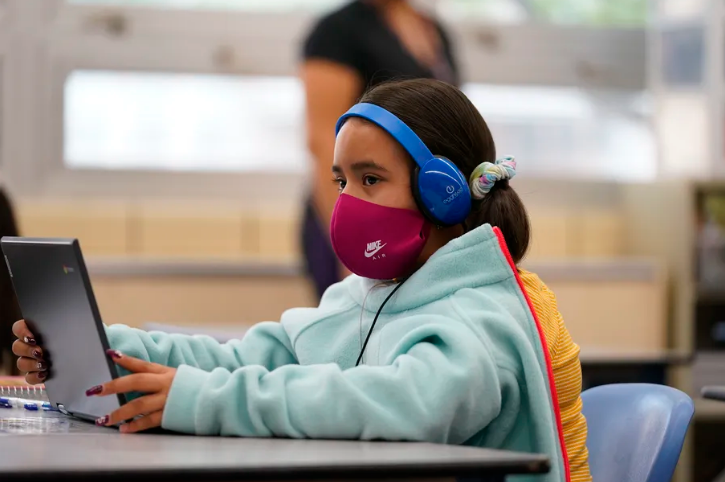 The pandemic pulled some New Jersey students even further behind this school year and worsened learning disparities across race and class lines, according to a new analysis of student test scores.

Looking at a sample of students in grades 3-8, the analysis found that students saw about 70% as much learning growth in English during the first half of this school year as they would during that period in a typical year. They made about 64% of expected progress in math during that time, and Black, Hispanic, and economically disadvantaged students saw less growth than their peers in both subjects.

Funded by the New Jersey Children’s Foundation, an education advocacy group, the report relies on test scores from this fall and winter that 15 districts and charter schools agreed to share. It focuses on just over 8,200 students within that group whose scores the researchers considered reliable.

While based on limited data, the findings are in line with studies showing that students nationwide started this school year academically behind, and that students of color and economically disadvantaged students experienced the most severe learning lags.

The analysis, which the advocacy group JerseyCAN commissioned, is the first to try to quantify the pandemic’s impact on student achievement across multiple New Jersey districts this school year. And it might be the only one for some time, as the state only recently began collecting local test data from districts and it is still unclear when and how many students will take this year’s state tests.

The report comes as New Jersey is set to receive billions of additional federal dollars to help schools recover from the pandemic — with at least $636 million meant to combat student learning loss.

“We should all feel heartbroken” about the report’s findings, said state Sen. M. Teresa Ruiz. However, the report can also help policymakers “use the generous amount of resources that are coming into the state and the districts to deal with the current pandemic learning loss.”

Concerns about academic backsliding emerged last spring after the pandemic emptied out classrooms and many schools struggled to shift instruction online. The fears were validated this fall when data from several diagnostic tests showed that students nationwide, on average, started behind where they would have in a typical year.

But rather than bring students back in person this fall and start the recovery process, the ongoing pandemic forced many schools to remain all-remote. While more New Jersey districts have started physically reopening schools, more than 300,000 students — including those in large urban districts such as Newark, Paterson, and Jersey City — have gone more than a year without entering classrooms. Even districts that have reopened buildings have tended to offer only a few days of in-person learning per week, and many have had to revert to remote learning following coronavirus outbreaks.

The new analysis aims to measure the impact of the continuing disruptions of student learning. It was conducted by EmpowerK12, an education research firm that also has estimated learning loss in Washington, D.C. and Atlanta.

The analysis found that Black and Hispanic students lost more ground than White and Asian students, and students from lower-income families slid further behind than those from higher-income families, suggesting that learning gaps between those groups have widened. New Jersey districts where most students are Black or Hispanic have been far more likely than other districts to operate remotely this year.

While the findings are consistent with national trends, the report comes with some major caveats.

The researchers agreed to keep the districts that shared their test data anonymous. Josh Boots, Empower K12’s executive director, only would say that 91% of the participants are traditional school districts and 9% are charter schools, and some offered hybrid learning this school year while others were fully remote.

The data included the scores of 18,000 students who took one of two computer-based tests: NWEA’s Measures of Academic Progress or Curriculum Associates’ i-Ready Diagnostic. However, the researchers excluded students who did not take the test at both the start and middle of the year. And because most students took the tests remotely from home, the researchers also removed students who spent an unusually long or short amount of time completing the tests or who guessed answers at an unusual rate.

The researchers were left with only about 8,250 students in their sample. For parts of the study, including the analysis of student growth, the researchers weighted the sample by race and ethnicity, economic disadvantage, special education status, and English proficiency in order to make it more comparable to students statewide.

Kristin Blagg, a senior research associate in the Center on Education Data and Policy at the Urban Institute, said any analysis of student learning during the pandemic is valuable. But she also cautioned against drawing sweeping conclusions from such a limited dataset.

“Any study like this is a pixel in our broader understanding of how we can help students in the long run,” she said.

Districts across the country and in New Jersey already are planning ways to catch up students who have fallen behind.

Sen. Ruiz recently proposed legislation that would require every district to offer some type of summer learning this year. A different bill would let families who believe their children are significantly behind request that they repeat the same grade next school year.

JerseyCAN, which has urged the state to collect more data on student performance during the pandemic, held a press briefing Monday with Sen. Ruiz and Vivian Cox Fraser, president and CEO of the Urban League of Essex County, to call attention to the new study.

“This report needs to be a launching pad for a very robust statewide conversation about our students’ education recovery,” she said.

This article was originally posted on Some New Jersey students lost ground during the pandemic, racial disparities widened