Home » State to expand vaccine eligibility to residents 16 and older 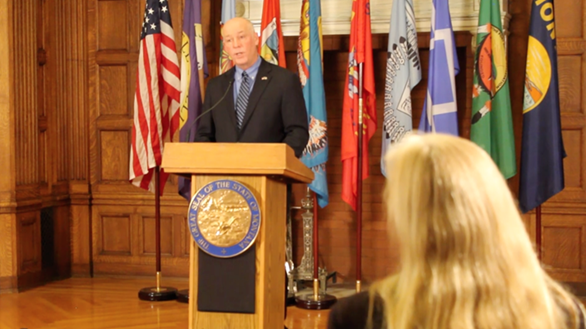 State to expand vaccine eligibility to residents 16 and older

After months of calculated and incremental expansions in vaccine eligibility, all Montanans 16 and older will be allowed to sign up to receive inoculations beginning April 1.

The Tuesday announcement by Gov. Greg Gianforte was prompted in part by growing confidence in the national vaccine supply, and, Gianforte said, after some counties have indicated they are prepared to proceed to the next stage of distribution.

“As vaccine production ramps up, and new vaccines are introduced, we’re seeing greater supply and our hope is growing stronger,” Gianforte said, noting that roughly 367,000 doses have been administered thus far and about 16% of the state’s population is fully immunized.

After a call with White House staff and other governors Tuesday morning, Gianforte said, his team was “encouraged” by pharmaceutical companies’ projected increase in production levels. With the entire state currently working to vaccinate those with underlying health conditions and other groups in the Phase 1B+ category, expediting the timeline for vaccinating most other Montanans has become more feasible.

“The next logical step was really to make it available to everyone so that we can go back to normal,” Gianforte said in a press conference Tuesday afternoon.

The expanded eligibility will be implemented through the state’s Department of Public Health and Human Services in collaboration with local health officials, pharmacies and additional partners, said Major General Matthew Quinn, head of Gianforte’s COVID-19 task force. Approximately 400 new locations around the state will be able to administer vaccines in the coming weeks, Quinn said, as the federal allocations increase. Ultimately, Quinn estimated, all Montanans who want a vaccine should be able to obtain one by mid to late May.

Currently, about 25% of Montana’s eligible population has received a vaccine, according to comments made to lawmakers Tuesday by DPHHS Communicable Disease Control and Prevention Bureau administrator Jim Murphy.

“We’re doing fairly well,” Murphy said, adding that he’s hopeful that “the combination of completing [both vaccinations] and the number of people that have been infected will start to bring us up to numbers that will protect us.”

Some local health officials expressed excitement and optimism on Tuesday at the news of increased eligibility.

In Lewis and Clark County, health officer Drenda Niemann said the county and local health care providers “are ready to expand operations when vaccine supply increases as it is projected to do.” That expansion could include using Carroll College as a mass vaccination site if needed, sending mobile clinics to rural areas, and having primary care providers administer vaccines by appointment, Niemann said.

“Bottom line, we are ready to go in Lewis and Clark County as soon as supply increases,” Niemann said in an emailed statement to Montana Free Press.

In his press conference Tuesday, Gianforte said he intends to continue encouraging Montanans to sign up for any of the currently approved vaccines as a way to build confidence across the state. Nationally, recent polling has indicated that Americans are becoming more willing to receive the vaccine, although Republicans remain more skeptical and opposed than Democrats.

“Getting one of these safe, effective vaccines will protect you, will protect your loved ones and your neighbors from this virus,” Gianforte said. “It will help us get back to a more normal life and one where we get together with friends and families without worry.”

In the coming weeks, Gianforte said DPHHS plans to start issuing public service announcements with information about the vaccines. The governor directed Montanans to go to their local public health website for information about how and where to sign up for a vaccine appointment.