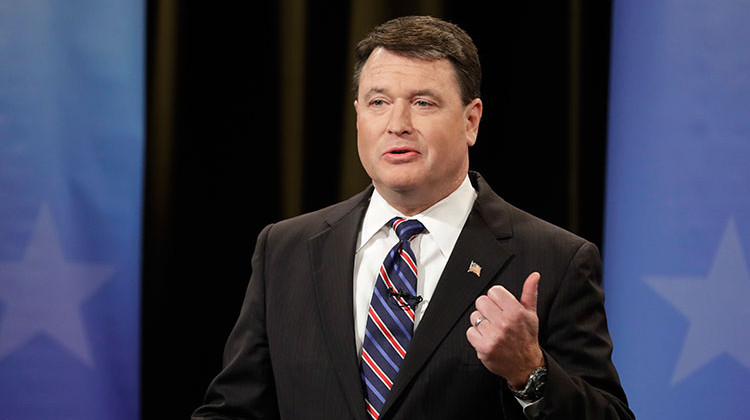 Indiana Attorney General Todd Rokita announced he won’t OK the hiring of a lawyer to represent Gov. Eric Holcomb in his lawsuit against the legislature over House Bill 1123.

The announcement is the latest twist in the ongoing story of the effort of Republican legislators wanting to have some say in the state’s response to the COVID-19 pandemic, which has been almost entirely in the hands of the governor for the last year.

HB 1123 allows legislative leaders to call the Indiana General Assembly into a special session after the governor has declared a statewide emergency – a special session that could last no more than 40 days. Holcomb vetoed the bill, saying it was unconstitutional as it violated the separation of powers laid out in the Indiana Constitution. But both the House and Senate voted overwhelmingly to override his veto, making HB 1123 state law, now in effect.

In a somewhat cryptic news release distributed Tuesday afternoon, Rokita said the state attorney general is the only person who can “determine and advocate the legal position of all state government” and that he is “not beset by a conflict of interest” but rather is “setting a single, unified legal position for the state as a whole.”

He also said the Indiana Supreme Court has held that no state agency or office-holder can file for declaratory judgement – asking a judge to declare a law invalid.

“Allowing state agencies to resort to the judicial system for review of every statute passed would foster legislative irresponsibility and unnecessarily overburden the courts into issuing, essentially, advisory opinions,” Rokita said in his news release.

Holcomb’s suit, filed in Marion County, had named as defendants Speaker of the House Todd Huston and President Pro Tempore of the Indiana Senate Rodric Bray.

Huston responded to news of the suit with a written statement.

“Governor Holcomb has been transparent about his thoughts and intentions regarding House Enrolled Act 1123,” the statement said. “We are in consultation with the Indiana Attorney General’s Office on what the next steps will be in this matter.”

Rokita’s office did not return calls asking for clarification and the author of the original bill, Rep. Matt Lehman, R-Berne, the Republican floor leader, declined to comment.

But some local attorneys in Indianapolis had some thoughts on the issue.

Attorney Mark Rutherford, who is representing Yergy’s BBQ restaurant in its suit over the state mask mandate, says Holcomb can probably find other ways to pay for the suit he filed on HB 1123 – perhaps out of his campaign account, or by raising private money.

Rutherford is the former head of the Libertarian Party of Indiana.

He says he’s interested to see what a judge decides on the HB 1123, as the Indiana Constitution has some particular features of note.

“The Indiana Constitution, if you study constitutions, is one of the more strict separation-of-powers constitutions,” he said. “It’s even stricter than the United States Constitution. It’s pretty bright-line strict. The governor does the administrative and executive function; the legislatures passes the laws; the judiciary makes rulings on laws and helps settles dispute…it’s very, very clearly delineated. So what happens is, if there is an emergency, can he start really crafting laws, which are what a lot of us are saying he did.”