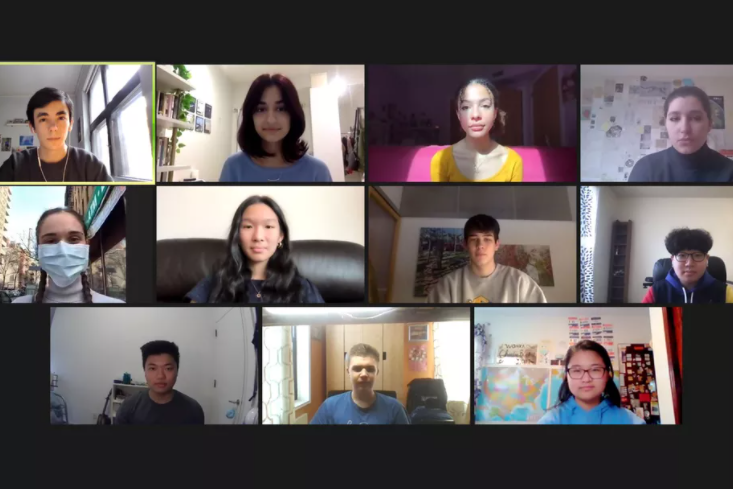 Stuyvesant students say the crushing workload is hurting their mental health. Here’s what they’re doing about it.

When a sophomore at Stuyvesant High School commented recently in a student Facebook group about feeling demoralized, burned out, and unsure if they could keep going, about 500 peers at the elite public school responded that they felt the same way.

“We’ve always been aware of these mental health issues, but there’s been a cone of silence around them,” said Julian Giordano, a Stuyvesant senior and student union president. “That post broke a lot of that silence.”

After the Facebook post opened the floodgates, the student union took action to assess the needs of their classmates and to confront the pressure cooker environment that drives so many of them to overwhelm — even despair. Students are now acknowledging that the famously challenging school is not always a healthy environment, and they’re demanding a culture shift.

Like many New York City high school students who have been learning exclusively from home the past four months, Stuy students are feeling isolated, according to a mental health survey the student union conducted in January. Students’ No. 1 complaint, though, is the massive amount of homework — sometimes six or eight hours of it a night.

At the same time, only half of students surveyed reported having one adult they feel comfortable going to with their challenges. That matters, because students who had a trusted adult at school were three times more likely to rate their current mental health positively than those who lacked that connection.

Among the other findings: Roughly 43% of students felt their teachers didn’t follow academic policies, like caps on homework.

“Stuy is obviously rigorous and really prestigious, but it doesn’t have to be cruel,” student union senior caucus leader Ayala Sela said during a January presentation of the student mental health survey. Some 1,100 — about one-third of the student body — responded to the questions.

High schools across the nation have seen mental health challenges heightened amid the loss and disorientation the pandemic has brought. But one major shift among many young people is the willingness to expose their personal struggles and confront the toxic structures that allow them to fester.

“Fortunately we have very proactive students who are more than willing to convey what’s happening,” said Yu, who has led Stuyvesant since August. “We’re trying to find the balance of academic excellence and rigor and also ensuring that young people have a positive experience at a time when it’s hard.”

Focus on ‘better’ not ‘more’

Previous concerns about mental health pushed the school leadership team previously to set limits on homework, Giordano said. The pandemic, however, threw things off kilter. Instead of having 10 periods a day this year, the day is split in half, with periods one through five on a given day and six through 10 on alternating days. Homework for regular classes is supposed to be capped at an hour over two days, or two hours for Advanced Placement classes, Giordano explained.

Much of the discussion about the path forward has often been mired in the debate over academic standards.

“It often comes down to this zero sum game, that in order to support students’ mental health that we need to give a little on the academics,” he said. “I think they’re both possible. They both need to be possible.”

But they haven’t always felt possible. When English teacher Mark Henderson started working at Stuyvesant about 15 years ago, the principal at the time would tell students they could only choose two of the following: friends, sleep, or grades. Though the administration no longer espouses that “macho motto,” Henderson said, the students still say it to each other.

The culture needs to shift from its ethic of “more” to one focusing on “better,” Henderson believes, but that’s not an easy feat.

“For teachers and many in general, how do we balance the desire for excellence from our students, the desire for more, and frankly, the stress and the damage we can see sometimes being done to our students,” he said. “There’s so much ingrained into the culture, and for all of us — teachers, students, and parents — it’s difficult to see our way out of it.”

Henderson has started asking his students each day how long their homework takes to better understand their experience.

The school can no longer shrug off its mental health crisis, said Amy Chazkel, a mom of a Stuyvesant junior and a professor at Columbia University.

“The cumulative workload is just unbearable,” she said. “There are so many layers of suffering because students are under intense pressure to succeed. There’s a sink or swim mentality: You’re at Stuyvesant because you’re superior. If you’re not hacking it, you’re in the wrong place. And many teachers and the school’s administration, if they’re not actively promoting that, they’re not doing much to diffuse it.”

The student union is also trying to bridge the gulf between students and staff, sharing their survey findings with the counseling department as well as the school’s various academic departments.

“We realized  there’s been a lack of communication and understanding between the students and teachers,” Giordano explained. “I think teachers are struggling with a lot of the same mental health issues.”

Many teachers felt overwhelmed with the late start of the school year and having to cram in material, especially for the AP tests typically administered in May.

In talking with school staff, the student union learned that many teachers felt unsupported during the transition to remote learning and said they were ill-prepared to incorporate social emotional learning online. The vast majority of Stuyvesant students opted to learn exclusively from home, mirroring citywide high school trends, and when some students return to their Lower Manhattan campus on March 22, they will be taking classes online with teachers who are not in the same room as them.

On the heels of the survey, the school prioritized a professional development session for the teachers that included a mental health component and a socialization and engagement one.

Giordano has seen the fruits of these conversations in his math class, where his teacher recently started off a class showing the students graphs with various slopes and asked them to compare the slopes to their mental state. It got the teens talking about their feelings — and thinking about math concepts.

The counseling department is also administering a student survey and doing follow ups with individual students, as well as adding office hours, Giordano explained. Questions remain, however, about how to engage the students who need help but don’t show up.

When the campus reopens later this month, Principal Yu said the school plans to be more “intentional” about finding free periods in students schedules where they can do small group community-building activities. Many students were most excited about sports starting up again, and Giordano was looking forward to the school’s annual Sing performance, a revered New York City tradition where grades compete with their own mini musicals.

Yu promised the school would be transparent about steps the school plans to take.

A working draft of the “Commitment to Student Wellbeing” plan, which initially only mentioned “mental health” once and focused on “maximizing productivity” — much to the dismay of some students and parents — has already been tweaked.

He added: “We take this very seriously, and we’ll continue to improve on it both short and longer term.”

This article was originally posted on Stuyvesant students say the crushing workload is hurting their mental health. Here’s what they’re doing about it.