Please ensure Javascript is enabled for purposes of website accessibility Superintendent wants ‘Memphis’ back in district name and to add dual language programs, fine arts to all schools - THE CHICAGO HERALD Press "Enter" to skip to content

Home » Superintendent wants ‘Memphis’ back in district name and to add dual language programs, fine arts to all schools 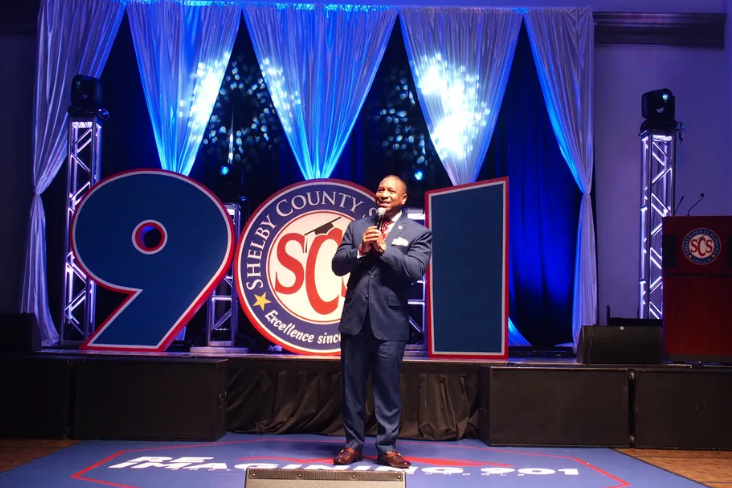 Superintendent wants ‘Memphis’ back in district name and to add dual language programs, fine arts to all schools

A decade after voters approved merging Memphis City Schools with the county school district, Superintendent Joris Ray is now proposing that Memphis be added back into the district’s name.

At an elaborate breakfast at the Hilton in East Memphis — complete with lights, balloons and radio DJ Stan Bell — Ray delivered his first speech since the pandemic began, on the theme “Reimagining 901.”

“I know there are better days ahead,” he told the crowd of about 150 district staff, elected officials, and community leaders gathered on Friday morning. “And I need you in this work with me.”

Ray’s latest initiatives include raising the minimum teacher salary by 7%, hiring hundreds of teacher assistants to reduce the ratio of children to adults in elementary schools, and adding more dual language and fine arts courses.

The address, which began at 9:01 a.m., is the public’s first glimpse of the district’s 10-year “Reimagining 901” plan for school buildings and academics that has been in the works for two years. Next week, district officials plan to share details of the plan, which will likely include school closures. The presentation to school board members is scheduled for Monday and to county commissioners on Wednesday.

The proposed initiatives would mostly be paid for by the $500 million from the district’s third round of federal coronavirus relief money. But in order to sustain the changes and help students “climb their way out of generational poverty,” Ray, who’s approaching his second year as head of schools, said the district would need more money from city, county, and state governments.

A slew of technical issues in recent years meant that state test results measuring the district’s progress had not been available, said Angela Whitelaw, a deputy superintendent.

“As we were thinking about Reimagining 901, we came back and we looked at those goals and now we have another set of goals not far off from where we were,” she said. “The fact is that we now have measurements that we can count on and we can get there by 2030.”

In 2015, Ray’s predecessor, Dorsey Hopson, unveiled a 10-year plan that included boosting early literacy, community partnerships, and preparing students for college and careers after high school. The district is not on track to meet those many of those goals by 2025. The district’s average score for the ACT college entrance exam has been stagnant for the past three years at about 17.8. A student is considered ready for college if they score a 21. After years of incremental growth, the district’s graduation rate also slightly dipped last year, mirroring a statewide trend.

Below is a list of efforts Ray announced during the speech Friday morning. Some have been in the works for years, while others are new:

But the most pressing issue on some parents’ minds had nothing to do with long-term plans.

Several parents watching the livestream on Facebook wanted to know what school would look like for students in the fall. Shelby County Schools reopened classrooms in early March after offering only virtual classes most of this school year. Still, about two-thirds of the district’s students are learning remotely. Students who are in classrooms still log into video calls for class, a practice that some frustrated parents nationwide have dubbed, “Zoom in the room.”

A district official responded to the question in a Facebook comment: “Our goal is to ensure a safe learning environment for in-person learning. At this time, the District is still in early discussions regarding virtual options for next school year.”

Reactions from teachers union leaders, school board members, and students present at the event centered on building upgrades, increases to teacher pay, and adding more staff in elementary school classrooms.

Jolie Madihalli, the president of the Memphis-Shelby County Education Association, said that as a former kindergarten teacher, having another adult in the classroom to help with taking students to the bathroom or discipline issues would allow for more time to teach.

Madihalli said she was also glad to hear Ray talk about teacher pay. The district’s two teachers unions have been negotiating with Shelby County Schools leaders for a new agreement, which includes teacher pay and working conditions, for two years with no resolution. In Tennessee, teachers union members do not have to vote on the resulting contract before approval; the school board has the final say.

“The unions have worked really hard to… return to a step and lane system,” she said. “I hope it does come to fruition when we’re back at the table.”

Hailey Henderson, a sophomore at Middle College High School and the granddaughter of a teacher, said, “While we’re focusing on the children, which is amazing, we’re not forgetting the people who have to teach the kids and make sure that they’re set up for success.”

The expansion of language courses was also important to her.

“It opens so many opportunities anywhere you go,” she said.

Talking with reporters after Ray’s address, Miska Clay Bibbs, the school board’s chairwoman, said the district is coming into its own identity after years of transition.

“We’re now making sure that we understand who we are to the community and putting our stake in the ground around what that looks like,” she said. ”The reality of it is, we’re now getting into our groove.”

This article was originally posted on Superintendent wants ‘Memphis’ back in district name and to add dual language programs, fine arts to all schools