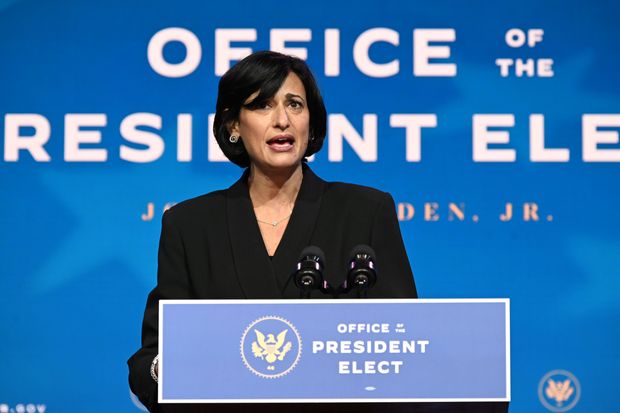 The teachers union in the middle of a scandal for influencing the Centers for Disease Control and Prevention’s official school reopening guidance gave nearly $20 million to Democrats in the 2020 election cycle, filings show.

Federal election filings reveal that the American Federation of Teachers and its local affiliates spent $19,903,532 on political donations during the 2020 cycle, with nearly all of the funds going to Democrats and liberal groups.

Besides PACs that supported Congressional Democrats, the AFT network also gave to groups like “For Our Future,” a liberal organization that received more than $1.5 million and heralded Biden’s inauguration on Twitter.

“There is so much to celebrate today,” the group wrote on inauguration day. “While we know there is ‘much to repair, much to restore, much to heal, much to build, and much to gain.’ And we’re ready, #PresidentBiden & #KamalaHarrisVP!”

AFT affiliates gave to Democratic federal Congressional candidates over Republicans more than 99% of the time in the 2020 cycle, filings show.

The AFT has come under fire recently for its role in shaping CDC guidance around schools reopening. The New York Post reported last weekend on emails between top White House, CDC, and AFT officials that show the AFT crafting language and overall working closely with the CDC. The communication intensified ahead of the CDC’s planned Feb. 12 announcement to recommend whether schools should reopen.

In that February announcement, the CDC ultimately sided with the teachers union and delayed issuing guidance that schools should resume fully in-person classes.

After the emails emerged, Republicans on the House Energy and Commerce Committee sent a letter Wednesday to CDC Director Rochelle Walensky alleging that political influence from the teachers unions and White House influenced the federal agency’s official guidance. The Republicans argue the agency put “politics over science and Biden-Harris campaign donors over children.“

“Despite prior questions on the matter, recently released emails show that the AFT and NEA were able to weigh in on and lobby for changes made in the CDC’s Operational Strategy for Reopening Schools, the agency’s guidance for reopening schools around the country,” the Energy and Commerce Committee said in a statement.

The AFT defended its lobbying Thursday, saying the CDC should welcome input from other stakeholders and that it is simply representing the interests of their members.

“The AFT represents 1.7 million educators, healthcare professionals and public employees who spent the last 14 months serving on the front lines of the COVID-19 pandemic,” AFT President Randi Weingarten said. “So naturally, we have been in regular touch with the agencies setting policy that affect their work and lives, including the CDC. We appreciate that under Dr. Walensky’s leadership, the CDC welcomes stakeholder feedback, as opposed to ignoring it.”

The National Education Association network, another large teachers union that consulted on the CDC guidance, gave nearly $15 million to Democratic-tied causes in the 2020 cycle, the vast majority of its spending. The AFT and NEA both endorsed Biden for president in March of last year.

“The unions knew exactly what they were buying in 2020,” said Aaron Withe, CEO of the Freedom Foundation. “We now see how well that investment is paying off.

“For over a year now, we’ve been told to listen to the science and to follow the guidelines from the Centers for Disease Control,” Withe added. “Now we learn the government health bureaucracy we’ve been told is leading us through this pandemic is actually taking its cue from the teachers unions who’ve been holding our kids hostage to their political demands.”

Weingarten argues, though, her union lobbies Republicans as well, not just Democrats.

“In fact, we contacted the agency more in 2020 during the Trump administration than we have during the Biden administration in 2021 – requesting additional guidance, questioning policy, providing testimony and offering an educator and healthcare worker perspective,” Weingarten said. “And while we have at times been concerned about their conclusions – as we were initially with the change in classroom physical distancing rules – we respect deeply that the CDC career staff has always taken its responsibility seriously.”

Some on the right have called for Walensky’s resignation over the controversy.

“The CDC is supposed [to] be occupied by scientists who do not bow to political influence. This obviously is not the case under Dr. Walensky’s leadership,” said Rep. Greg Murphy, R-N.C., who is also a doctor. “As the most important public health official in America, she should have had the fortitude to reject AFT’s influence in the CDC’s recommendations.”