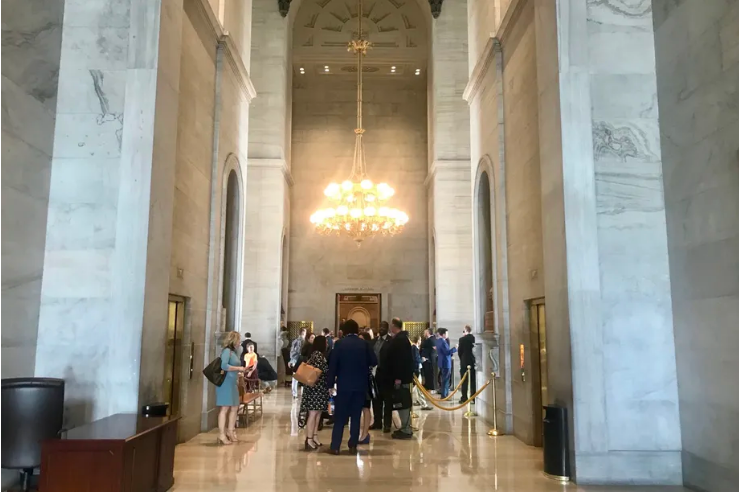 After a contentious debate over school reopenings in Memphis and Nashville, one lawmaker filed legislation Monday outlining how Tennessee’s education commissioner could take over any district that is falling short of its academic goals, potentially firing its superintendent and replacing elected school board members.

In addition to academics, the proposal says the commissioner could factor in district “competence” in meeting operational and fiscal responsibilities, as well as federal and state laws, rules, regulations, policies, and guidelines.

Rep. Scott Cepicky, a Republican from rural Culleoka near Nashville, could introduce his amendment as soon as Tuesday to a House education subcommittee that he chairs.

The measure is co-sponsored by Sen. Joey Hensley, a Republican from Hohenwald. Hensley’s staff directed all questions to Cepicky, who did not respond to multiple requests for comment.

The proposal appears to be the latest volley in a tense school reopening dispute between local officials in Tennessee’s two largest school systems and the state, which has struggled to improve achievement in low-performing neighborhood schools it has taken over in the last decade.

After the legislature threatened to strip away their funding, Shelby County Schools and Metropolitan Nashville Public Schools recently became the state’s last districts to return students to school buildings during the pandemic.

Both communities also are in the midst of major legal battles with the state over education. The state has appealed a judge’s 2020 ruling that overturned a school voucher law championed by Republican Gov. Bill Lee. A separate case is challenging the adequacy of state funding for schools, especially for students in urban districts.

Cepicky’s proposal could authorize the commissioner to take action as soon as the upcoming school year for any district that is not meeting, or historically has not met, performance goals and measures set by the Tennessee State Board of Education.

Such action could include guidance and technical assistance to develop an improvement plan — or the state assuming “all powers of governance,” including recommending to the state board that the superintendent or school board be replaced.

Cepicky’s amendment defines a district’s academic shortcomings as not meeting its responsibilities to one or more “priority schools” in the state’s bottom 5%, or certain schools that have significant achievement gaps among student groups.

The proposal says the state would have five years to return the district to local control. It also stipulates that no leaders who are turned out could be eligible for appointment or election to their office in the future.

The pending legislation drew quick responses from district leaders in Nashville, while officials with Shelby County Schools said they were studying it.

Christiane Buggs, who chairs Nashville’s school board, called the measure an “anti-democratic” proposal that would be “disastrous public policy.”

“We look forward to any support the State of Tennessee can give to school districts in a cooperative manner to achieve better student outcomes,” Buggs said in a statement.

Under state law, the commissioner must get approval from the state Board of Education to fire a district’s superintendent and school board members. The commissioner then must make a case before a legislative oversight committee on education in order to proceed.

House Education Committee Chairman Mark White said he was OK with Cepicky’s proposal.  “It is already in law giving the commissioner this right. This bill just puts in place a procedure for doing so,” he said.

Talk of Tennessee taking over school districts has been going on for years, even before the state began taking control of low-performing schools in Memphis and Nashville in 2012 as part of its school turnaround initiative known as the Achievement School District, or ASD. That charter-reliant program has been slow and spotty in improving schools, and lawmakers are considering another bill to set exit strategies for schools whose 10-year charter contracts with the state are about to expire.

“If history is our guide, we know that state takeover of schools in Tennessee has been a failed strategy on virtually every measure — and most importantly for the students we hope to help,” said Gini Pupo-Walker, a Nashville school board member who also leads The Education Trust in Tennessee.

You can follow the bill that Cepicky is seeking to amend here.