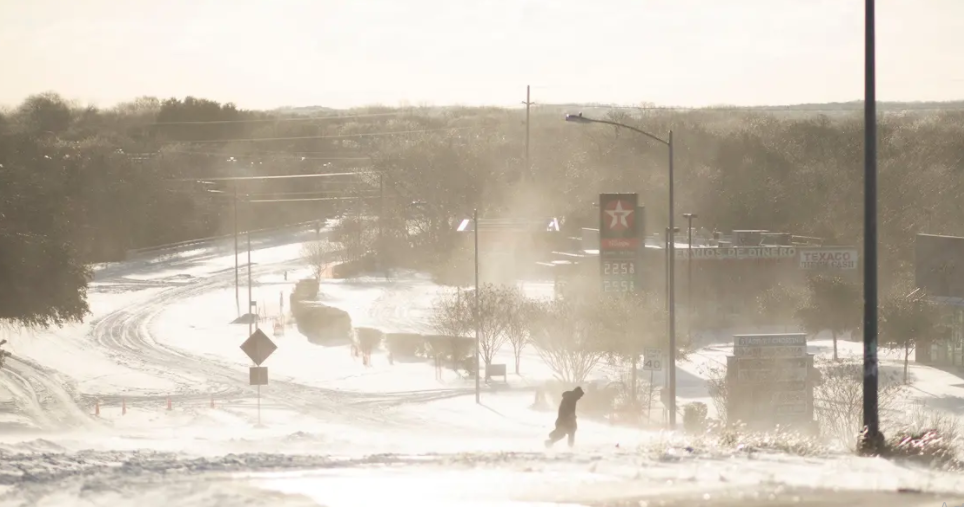 A blast of arctic air swept through Texas, bringing with it ice, snow and record-low temperatures that haven’t been felt in decades. The winter storm is unprecedented in scope — all 254 counties in the state have been affected by the bitter cold and millions have been without electricity. Icy roads have also contributed to widespread closures, and cities have opened emergency shelters to help people cope with the dangerous temperatures. Texas Tribune photographers around the state headed out to record this winter storm. Here’s some of what they saw.

A sign in South Austin warns about freezing conditions in the area. The severe snow storm blanketed roads and dropped temperatures into the single digits across various parts of Austin and Texas

A quiet and snowy morning in The Blanco Vista neighborhood of San Marcos.

The Blanco Vista neighborhood of San Marcos was blanketed with several inches of snow as a massive winter weather system caused power outages across Texas on Feb. 15, 2021.

Houstonians went out to Hermann Park to enjoy the snowfall in the city. Houston was covered in snow after a rare winter storm passed through the state.

A handful of people visited the park with tennis rackets in hand after a rare snowfall in Houston.

Snow and icicles gathered on various items throughout Houston. The city was covered in snow after a winter storm rolled through the state.

An aerial view of northbound Interstate 35 at Stassney Lane in South Austin after a severe snow storm rolled through the area.

A Jeep drives off-road beneath the snow covered Franklin Mountains in El Paso after a winter snowstorm hit Texas.

First: A house painted with cacti is covered in snow and ice in El Paso. Last: Logan Williams sleds down a hill at Memorial Park in El Paso.

Cars slid on icy roads and people pushed stuck vehicles out of snow after a winter storm rolled through the Austin area. Temperatures are expected to remain cold until the end of the week.

A road covered in snow in McKinney after a winter storm that affected the entire state. The storm brought snow, ice, and freezing temperatures that caused hazardous driving conditions and electrical outages.