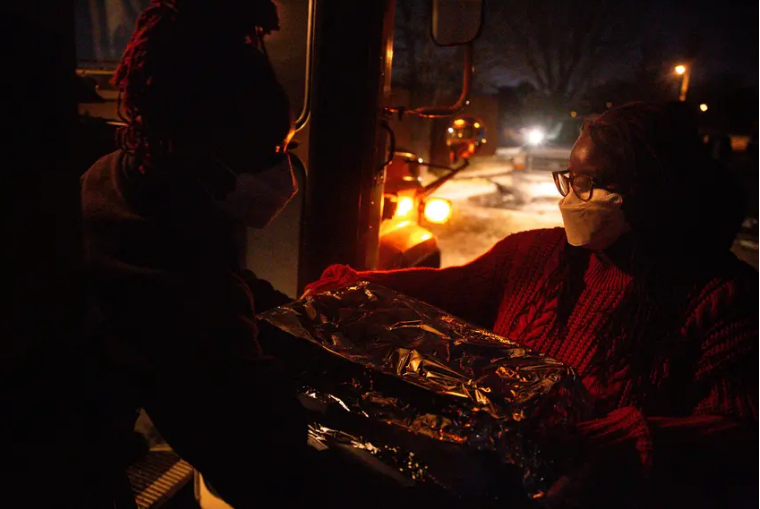 When the massive winter storm hit Texas last week, University of Texas at Austin student Sam Miles noticed that there seemed to be a lot of need expressed on social media that got lost “in the void” because there wasn’t a centralized system for keeping track of requests.

Miles decided to use her large Twitter presence to help: She created a Google Form to track what individuals needed and who could fulfill their requests. What started as an oatmeal drive to give warm breakfast to people on campus and in other parts of Austin grew to include paying for hotel rooms and cooking meals for delivery at a campus co-op one night. Some students even offered their apartments to strangers to help them escape the cold.

Primarily through Venmo, the group, made up mostly of students, had raised $12,000 by Monday and connected hundreds of people with resources in the process.

“I never expected it to be this big,” said Miles, 22, who works as a resident assistant in a UT-Austin dorm. “It’s not just me — I literally would not have been able to do it without every single person that’s made a donation.”

Last week, an untold number of Texans who had lost power and heat, and in some cases water, took to social media platforms to ask for help — and be connected to those who could offer it. On some feeds, it was impossible to scroll for more than a few minutes without seeing someone sharing details about warming centers or requests for money and supplies, followed by a Venmo handle or GoFundMe link.

As a result, millions of dollars have been raised by fellow Texans and people across the country who wanted to help. For example, Austin Mutual Aid, launched in March to assist Texans experiencing homelessness during the COVID-19 pandemic, has raised hundreds of thousands of dollars within the past week on GoFundMe alone.

While traditional charities and nonprofits like the Red Cross and the Salvation Army have immense donor bases and decades of experience helping people during disasters, smaller-scale efforts by individuals, churches and newly formed mutual aid groups have rallied to help others get through a historic winter storm — often by giving money directly to struggling Texans.

Mutual aid efforts have become increasingly popular during the COVID-19 pandemic because of social media and donation platforms like Venmo, Cash App and PayPal. Carla Brailey, a lecturer at the University of Houston, said mutual aid differs from more traditional philanthropy because of its collaborative nature between the often-working class people who both donate and receive assistance.

Matthew Marchetti, the executive director of CrowdSource Rescue, said the Houston-based organization was originally founded to respond to 2017’s Hurricane Harvey. Marchetti and other CrowdSource rescuers started by driving their five generators around Houston to help people in assisted living homes and others without power.

As word spread, the effort quickly grew to 56 generators, most of them donated by community members, and the group used other funds to provide hotel rooms for people facing eviction. The team has helped 17,000 Houston residents following the winter storm, according to their Twitter account.

Last week, the group’s network of volunteer and professional rescuers found themselves transitioning to deal with another weather-related disaster.

“This is one of the more complex disasters we’ve worked because, like in Harvey, there are elements of this where the city is sort of cut off,” said Marchetti, who works as a computer programmer. “It’s interesting, because for 6 feet of water, we have a plan ready to go, no problem there. An inch of ice, however, we got to sit there and think for a second.”

The Mutual Aid Houston collective also gained a new temporary focus after the winter storm hit. The group formed to help those impacted by the COVID-19 pandemic, then shifted gears after George Floyd’s death at the hands of Minneapolis police last year, which sparked demonstrations across the country. The group began supporting incarcerated people with donated funds and paying bail for jailed protesters.

One co-founder, 23-year-old Anna María, said their small group of core volunteers were all impacted by last week’s storm, which made it difficult to coordinate immediate support for fellow Houstonians.

“All of us got hit by it as well — we lost power and got our water shut off and we didn’t have signal,” said Anna María, who asked to be identified only by her first name because of threats she has received as a result of her advocacy for abolishing prisons and jails. “We could hardly communicate with each other, much less really organize.”

Together, she said the group has been able to collect and distribute almost $200,000 in payments to Houstonians who needed money for food, water and supplies after the storm. Now, Anna María said the group wants to pivot to helping people who are facing storm damage to their homes.

In Pearsall, a small town southwest of San Antonio, Stephanie Morales said her apartment was hovering near 20 degrees by Tuesday night after her power went out. When she posted about her cold apartment on social media, she said the Read the Red Prayer Ministry — the smallest church in the city — soon reached out.

Their building had electricity and some water, so Morales said she and around 30 other people slept on the floor on air mattresses and blankets.

Acquiring food to feed Pearsall residents in need was initially challenging — the local H-E-B had a hefty line by the time pastor Jerry Badillo went to purchase food in bulk in anticipation of feeding his community. But then he remembered the pounds of chicken and beef he and his wife purchased at the beginning of the pandemic and buried in a deep freezer for an emergency.

What started as a few packs of defrosted meat and fajitas grew into four days of donated food that filled more than 500 plates prepared out of a tiny kitchen. Montes Tire Shop even donated a 300-pound show pig on Thursday, Badillo said, which they shot at the owner’s ranch and turned into pulled pork for meals.

Morales said while she had volunteered with the church before, working with Read the Red and delivering meals across town has been a blessing.

“If something like this arises, I’ll be the first one to go,” she said. “I’ll definitely do it again. I’d do it in a heartbeat.”

Because mutual aid efforts are often shifting and operate without the kind of accounting and public transparency that more established charities employ, there is little automatic accountability for where money and other donations go.

Anna María said MAH usually posts screenshots that show donations and payments when they fundraise. She said the organization is waiting for its monthly report from Venmo so they can post details about all of their cash transactions related to last week’s storm.

Miles, the UT-Austin student, said most of the $12,000 she and others have raised has gone directly to people in need, and the rest was given to support and feed volunteers themselves. She said when she distributes funds, she doesn’t question whether the person on the other end is telling the truth about their situation.

“It’s hard to ask for help. If you’re in a place where you’re asking for help, we’re not going to question that. We’re not going to ask, ‘Oh, what’s your salary from last year?’” Miles said. “I’m sure there’s people that take advantage of it, just like there’s people that take advantage of everything we have. It doesn’t mean that the system shouldn’t exist.”

Anna María said groups like MAH have had to step up because so many people don’t get help when they need it from elected officials or other groups.

“You’ve got us, a bunch of 20-somethings, trying to figure this out as we go,” she said. “It has been frustrating to be, once again, forced into a position of, ‘OK, community members, we’re going to figure out how to keep each other alive.’”

Miles said she’s planning to keep going by providing information to others about making renters’ insurance claims and buying groceries for people who can’t access them easily.

“It’s really amazing to see the power that the people have, especially — or maybe in spite of — the lack of leadership or the lack of our state doing anything to really help us,” Miles said. “It’s just a really good reminder that people genuinely are so good.”