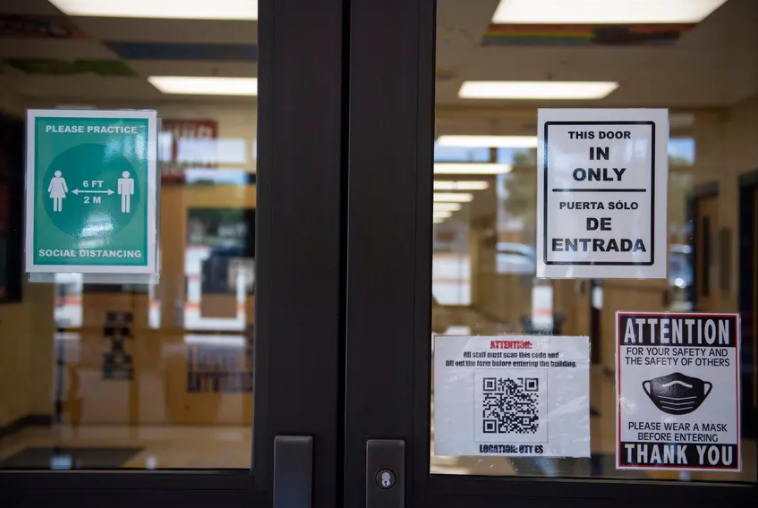 Mayors in some of Texas’ biggest cities announced that they will still mandate the use of masks in municipal buildings, even after the statewide mask order ends next week.

“I am going to issue an order mandating masks at all city-owned buildings. We have to do what we are legally allowed to do to get people to wear masks,” Dallas Mayor Eric Johnson said on Twitter Thursday morning. “We also still need to practice social distancing. And we still need to avoid taking unnecessary risks. The pandemic is not over.”

The cities’ announcements came shortly after Gov. Greg Abbott said on Tuesday that he is lifting the statewide mask mandate, effective March 10. Abbott said that “all businesses of any type are allowed to open 100%” and that, although the threat of COVID-19 is still present, “it is clear from the recoveries, vaccinations, reduced hospitalizations and safe practices that Texans are using that state mandates are no longer needed.”

In an email, Abbott spokesperson Renae Eze confirmed that cities are allowed to take this measure “just like private companies can with their property.”

According to an analysis by the Texas Municipal League, Abbott’s order doesn’t allow local leaders to impose fines or jail time for people who don’t follow mask mandates, so cities will have to ban maskless people from entering city-owned property or escort people out if they remove face coverings once inside.

“A city is clearly a public institution, meaning it retains control over and may require pandemic mitigation measures on its property, in its facilities and by its employees,” an email sent to members from the Texas Municipal League reads.

The email said that a city’s rules “will likely be tested in practice” and recommended that local authorities check with their legal advisers.

In Houston, where Mayor Sylvester Turner confirmed on Wednesday that municipal buildings will require masks, a city spokesperson said at least one person had already attempted to enter a city building without a mask.

“They were escorted out by security, keeping in mind that the governor’s order begins next Wednesday and the city plans to enforce mask wearing in municipal buildings,” spokesperson Mary Benton said in an email. “We will let all employees and visitors know the city enforced public health and safety rules.”

Both Austin and Travis County leaders said they will require masks to be worn in their properties.

“Nearly unanimous health experts tell us that masking is the best tool. We must stop this virus, to open up schools to all kids in person, to keep businesses open. And now the governor’s action has put those priorities at risk,” Austin Mayor Steve Adler said in a press conference on Thursday. “There is no scientific basis for the governor now creating an ambiguity where none should exist. Masking works and it continues to be necessary.”

San Antonio City Manager Erik Walsh announced that public buildings including the Alamodome, the Henry B. González Convention Center and the airport will keep their mask requirements.

In El Paso, a city that has been hit hard during the pandemic and where on Thursday almost 300 people remained hospitalized, leaders announced similar measures.

“Over 2,000 people have lost their lives [in El Paso]. We cannot go back there again,” El Paso Mayor Oscar Leeser said in a press conference on Wednesday. “The city of El Paso will continue to protect all our team members and make sure that when they go home to their families they feel they’ve been protected.”

A federal government order still in place allows fines of $250 for the first offense and up to $1,500 for repeat offenders who don’t mask up in airports, passenger rail and bus systems that fall under federal regulation.