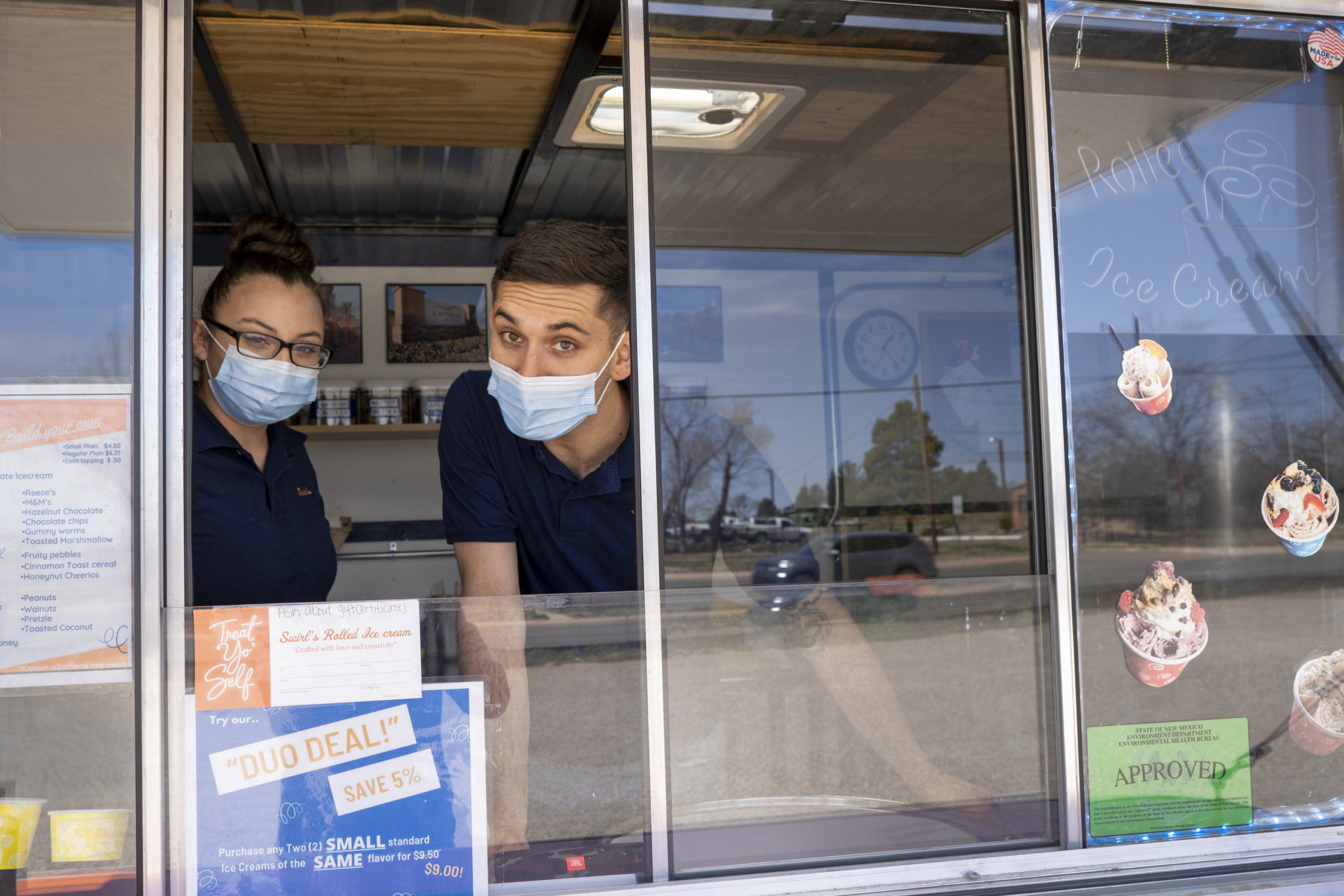 The town is getting a pandemic revival thanks to local teens

A loud bass beat vibrated through the air in the kitchen of The Skillet, but line cook Kyle Conway worked in silence. The 18-year-old, a big kid with the suggestion of a mustache, spiralized potatoes into ribbon fries, dumped breaded green chile into bubbling oil and assembled hamburgers hour after hour in the busy back room of the small restaurant.

“Things aren’t handed to you in life,” Conway said during a short break. “You have to work for the things you want.”

Conway wants a better future for his city of Las Vegas. Growing up there, he saw how few options young people had. They might hang out at the bowling alley or catch a high school basketball game, stop by the drive-in theater or ride around town listening to music. He and his friends liked growing up in a small town, but they wanted more. Some classmates quit school or turned to alcohol. “It’s hard to do something when there’s nothing to do,” he said.

Between 2006 and 2019, the number of young people in town dropped dramatically, from about 3,300 to 2,300, according to U.S. Census estimates analyzed by Headwaters Economics, a nonprofit research group. “The youth tend to leave,” said Joaquin Romero, an 18-year-old from Mora, a rural community 30 miles north of Las Vegas, who’s currently studying at an international boarding school near town. “Instead of staying and helping to make the community something that they would want to live in, it’s just easier to go somewhere else and make it for yourself.”

But Conway, Romero, and a handful of other young people have decided to make Las Vegas into the kind of place they’d want to stay. Over the past year, as COVID-19 has ravaged the world, they’ve been busy creating infrastructure to support their town. They’ve helped with the census, started and built up local businesses and gotten involved in city government.

Conway’s sticking around for the long-term — he’s finishing up his senior year of high school, then it’s off to college and law school. Someday he wants to work in the local district attorney’s office, where he once interned. Hopefully, he said, he can help break the cycles of incarceration that trap too many New Mexicans. “That’s my yellow brick road,” Conway said.

Las Vegas was once a railroad boomtown, but no longer. The historic Victorian homes and the grand old hotels are still there, but so are the run-down storefronts and dilapidated buildings. In recent decades, many have tried to bring about another boom, but progress is slow. It’s close-knit, though, and small. When Conway spoke of his rides around town with friends, he pointed out that they were basically driving in circles. “You can see Vegas six times in one night,” he said.

Before COVID-19, small towns like Las Vegas were gearing up for the census. The city’s isolation and the dearth of services in San Miguel County, where Las Vegas sits, make the census hard, so the county hired local young people to help.

Last spring, Conway and six other young people stood on the plaza in downtown Las Vegas, handing out free burritos to motorists and encouraging them to fill out the census. They went door to door around the city, and drove to outlying communities like Pecos to set up laptops on a table outside the Family Dollar, so that people could fill out the census right then and there.

“As soon as I found out that it meant money, it meant funding, it meant books in schools, it meant libraries, it meant roads being fixed, it meant all these different things, it meant hospitals being updated, it meant the betterment of the community — that’s what really sparked my interest,” Conway said.

That pride in Las Vegas’ future drives its band of boosters. That includes Matthew Probst. Though a generation older than Conway at 46, he is as devoted to seeing the city revived. He’s the medical director and chief quality officer for El Centro Family Health, a group of health clinics in Northern New Mexico, including five in Las Vegas. His county has kept up high rates of COVID-19 testing and vaccinations, but the pandemic has also shed a painful spotlight on the relationship between an individual’s health and means.

He sees the insidious effects of that lack throughout town. Take Commerce Field, one of the sports fields, which is wedged between the railroad tracks and the interstate. “It’s dirt, it’s clumpy grass if there is grass, there’s rocks, it’s just not in good shape,” said Probst, who’s also a youth soccer coach. Out-of-town kids show up in their fancy buses and laugh at the town’s state of disrepair, Probst said, leaving local teens feeling inferior. He’s excited about the city’s $3.5 million plan to redevelop Rodriguez Park, on the west side of town, which might include building new sports fields.

Over the past year, local teenagers decided it wasn’t enough to depend on adults, even supportive ones like Probst. A group put together a proposal for the city to start a youth commission, an organ of the city government that could advocate on behalf of the kids. “There’s always been adults running things,” Conway said. “It’s been difficult for the youth and young adults to have a say in what goes on.”

They had their first official meeting on April 6, where Conway was chosen as chair. Almost immediately, the teen council got a taste of adult politics, over a fleet of electric scooters.

Just one day after the youth commission meeting, city councilors voted 3-1 to end an agreement with Bird, a company that was renting out electric scooters around town. Council members worried about underage riders, scooter-related injuries and lawsuits against the city. But as Conway saw it, “That decision was to remove something for the youth to do.”

The next morning, his phone rang. The mayor wanted to know what the youth could do to help save the scooters. But it wasn’t so simple. After talking with other youth commissioners and weighing his options, Conway decided to stay out of it, fearing potential political repercussions and legal action.

“We want to be careful,” Conway said. “Something happens, and there goes the youth commission.”

Jonathan Roybal, 27, and Lauraina Vernon, 23, are running a much less controversial start-up — a food truck serving rolled ice cream, a Thai dessert that’s grown in popularity in the U.S. The pair started dishing out flavors on April 20, a month into the pandemic, and business has been good. About a year after opening, Roybal said they were thinking about bringing on some employees.

Vernon said that their success has even motivated her younger friends to think of opening their own businesses. She says it’s a resilient town, in spite of its difficulties — a place people keep finding ways to believe in. “There is definitely potential here in Las Vegas,” she said. “I think a lot more people are starting to see that.”

Isaac and Shawna Sandoval, the owners of The Skillet, also started their business as a food truck when they were in their twenties. Now they’re 33 and 37, and until April they lived upstairs from the restaurant. The eatery’s namesake, a 300-pound cast-iron skillet fashioned by Isaac himself, hangs over the front entrance. The Sandovals took advantage of last spring’s shutdown to expand the outdoor courtyard. In it rests a rusted-out, half-size school bus with a few tables inside, whose flank bears a prescient command: “EATHERENOWEATHERENOWEATHERE.”

Despite the pandemic, residents have been following the bus’ instruction, making The Skillet into a community gathering spot. During the summer, Wednesday night was pizza night, and Isaac cooked pies in an outdoor horno oven he’d built during the lockdown. The crowds came even as the temperature dropped. To keep diners warm, the staff burned a cord of wood every week in fire pits and replenished the outdoor heaters’ propane supply every other day.

“I think The Skillet has become something,” Isaac said. “Even during a pandemic, there’s something exciting happening here.”