Please ensure Javascript is enabled for purposes of website accessibility They sent early SOS signals about COVID and schools. Here’s what life looks like for them, one year in. - THE CHICAGO HERALD Press "Enter" to skip to content

Home » They sent early SOS signals about COVID and schools. Here’s what life looks like for them, one year in. 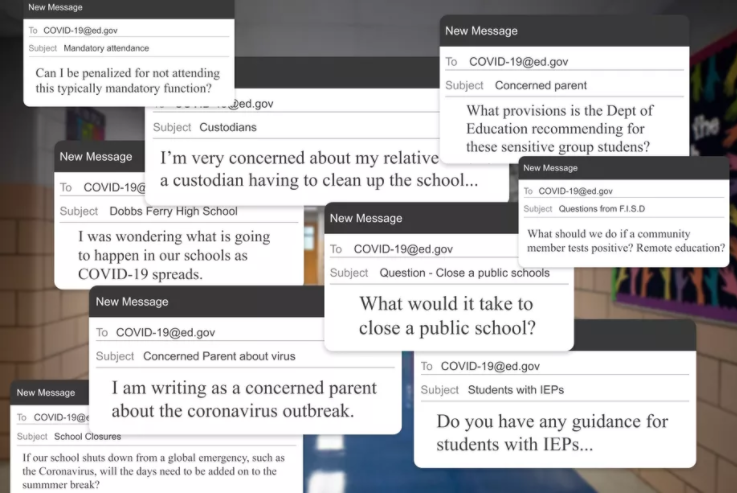 They sent early SOS signals about COVID and schools. Here’s what life looks like for them, one year in.

Chalkbeat obtained the emails sent to the inbox during the chaotic first two weeks of March 2020 through an open records request. Some of the first questions, like whether students should still gather in the lunchroom, would be answered in time, as public health officials learned more about how the virus spread. Others foreshadow what would become the most stubborn challenges, like how to serve students with disabilities remotely and how to know what exactly should trigger a school closure.

Together, they paint a picture of educators, parents, and students grasping for knowledge at the very start of a crisis for America’s schools.

One year later, we asked some of those who sent those first distress signals to tell us about that moment — and about how they navigated the challenging months ahead. Here’s what they told us.

12:19 p.m. March 9: ‘Do you have any guidance for students with IEPs who are participating in long term online learning?’

After 30 years, Beth Jones is very familiar with the intricacies of serving students with disabilities. So when the pandemic began closing school buildings, the assistant superintendent of Barrington 220 schools in northwest suburban Chicago knew her district was facing thorny questions about how to comply with students’ special education plans remotely.

When she didn’t hear back from federal officials, she sought advice from her school district’s lawyers and the Council for Exceptional Children, a national group for educators who work with students with disabilities. Then she advised her team: “Don’t look at the overwhelming amount of stuff we have to do.” Zero in on the most important goals in students’ special education plans, she told them, and above all, make sure they’re getting online.

When then-Secretary of Education Betsy DeVos made it clear there would be no “wiggle room” when it came to federal special education law, Jones’ focus turned to making sure students received every minute of the services they were entitled to, like speech therapy. A few weeks in, special education teachers and assistants in her district — which is relatively affluent, and provided students with iPads before the pandemic — had gotten into a rhythm.

In the fall, her district brought many students with disabilities back into buildings so they could meet with physical therapists, school psychologists, and occupational therapists in person.

“Was it the same as it would be? No,” Jones said. “Were there things that got in our way and obstacles? Yes. But the thing we never strayed from was: You have to meet the minutes, you have to provide the services, and you have to communicate with families.”

She wishes she could have known last March about the many positive things that would come out of the pandemic. The stronger relationships she’s built with her staff. The impressive work she’s seen teachers do. The struggling parents who now reach out for help.

Back then, “we all felt so doomed,” she said. Now, “they’re letting us into their lives and we’re getting through it.”

Before the pandemic, Linda Mendel spent her whole day with students. In the early morning, she was the school crossing guard. During the day, the Portland paraeducator would work with students with disabilities or students who needed extra academic help. And in the evening, she would teach students to sew and to take apart engines at an after-school program, which also served supper. “I know some of our kids are missing that,” she said.

Schools closed quickly after Mendel emailed federal officials, and the spring was a scramble. Without their usual materials or the ability to sit beside students, she and her colleagues improvised — sometimes, one paraeducator would hold a book up to the computer camera while the other worked with a student.

This school year, which has been entirely remote, has gone more smoothly. She’s been impressed by the way the schools created delivery systems for school supplies, hotspots, library books, and free meals. “One of my favorite things is seeing kids who don’t raise their hands participate more,” she said. “It’s let our shy kids shine.”

Still, certain aspects of in-person class just can’t be replicated. The students with autism she works with, she noted, have less access to social cues from their classmates when all they can see are each others’ faces on screens. “Students who use those visual cues, they’re losing a lot,” she said. “I don’t have a way to fix that.”

But she felt compelled to reach out in part because her daughter, Isabel, who was in first grade in Boston Public Schools when the pandemic began, has allergies and has needed a maintenance inhaler. As a young child, she had to be hospitalized several times for asthma. “I was nervous about her,” Atkeson said.

Atkeson envisioned schools holding assemblies to talk about hygiene — maybe teaching kids to sing the “Baby Shark” song while they washed up. Looking back now, she said, her note reveals some of the early confusion about the main way the virus spreads.

“We thought it was all hand washing, but it wasn’t. It was breathing shared air,” she said.

When her daughter’s school went remote, they experienced feelings now familiar to many families: frustration, boredom, stress. “There was just a lot of looking for passwords under pressure,” Atkeson said.

But there was one upside. Atkeson realized her daughter had been purposely moving slowly through her work, or randomly guessing on math games, because she was afraid to ask for help. Seeing it allowed Atkeson to intervene.

“I do feel more in touch with Isabel’s learning now,” Atkeson said. She says her daughter has started to internalize her nudges, too. “She will say: ‘You told me to ask questions.’”

Kelly Griffith, the schools chief in Talbot County, Maryland, has been an educator for 38 years. She’s run the school district for the last eight, and she’s also the president of the superintendents association in her state.

“You’re supposed to be the educator with all the answers. When you don’t have those answers, you start trying to find those answers,” she said.

So in early March, Griffith got on White House conference calls and emailed the education department: What happens next?

She didn’t hear back any time soon. “I don’t think anyone had the answers,” she said.

In the year since, Griffith has been at the forefront of a local campaign to get internet access to families in her rural district. She’s cried happy tears watching one of her kindergarten teachers connect with her students through a screen. And she got students back into buildings part-time for most of this school year with no evidence of COVID transmission.

That’s been an extraordinary logistics challenge. But she’s tried not to lose sight of how it’s all felt for students. When a group of high schoolers told her back-to-back virtual classes were wearing on them, she pushed schools to lengthen the traditional five-minute class changes to offer students more time to move around and decompress.

“Too many times, we’re trying to find technical solutions to all of the issues we have during a pandemic, and we lose sight of children,” she said. “That resonates with me on a daily basis. And I stop and think about our kids.”

When Melinda Dyer wrote to federal officials, Washington state was “ground zero” for the coronavirus. Dyer works for the state’s education agency assisting school district liaisons who work with homeless students, and she was desperate for information to pass on to districts from anyone in a position of authority.

“There was a lot of concern about students that were very high risk and not being able to have eyes on them on a daily basis,” Dyer recalls. “There was a level of crisis that I’ve not seen before.”

In Washington, many small school districts are in rural areas without internet providers. Centralized meal distribution hubs can be a challenge for homeless families to access if they are staying outside the district’s boundaries or don’t have transportation. It took a lot of creative work from school districts — like sending school buses to deliver meals, Chromebooks, and power strips — to get students what they needed.

Now, one of her biggest concerns is making sure schools are actively identifying students who are homeless or at risk of becoming homeless. Dyer says the identification of homeless students in Washington has decreased significantly, as it has elsewhere in the country. In some districts, it’s down by half.

“Having them vanish and districts not knowing where they went … that’s really concerning,” Dyer said. “It needs to be corrected.”

For Dyer, that means doing Zoom check-ins with districts, training school district liaisons, and reminding districts about their obligations to do things like hang notices in churches and on grocery store bulletin boards to let families know about their rights. She’s seen efforts vary. One district knocked on the door of every known address of a homeless student, while others “need a lot more help.” When the national eviction moratorium eventually lifts, she knows her department will need to provide even more support.

“This is a long haul,” she said. “There is a lot of work to be done, I believe, in just reconnecting and helping people feel safe and connected to schools again.”

This article was originally posted on They sent early SOS signals about COVID and schools. Here’s what life looks like for them, one year in.