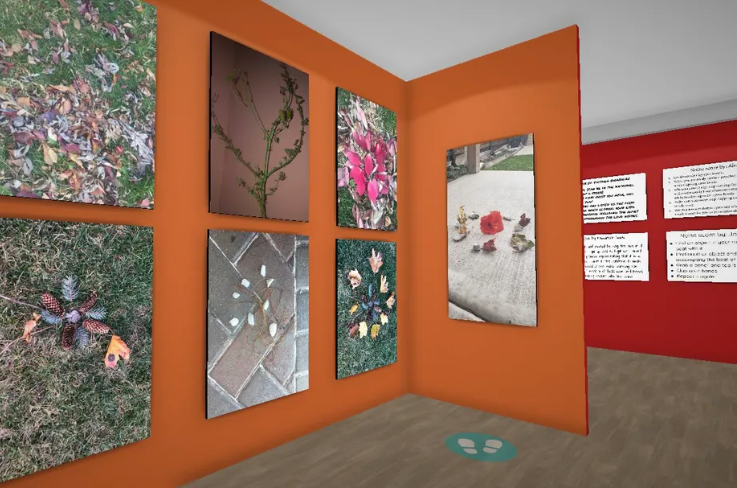 As usual, her fellow students had their cameras and microphones off, reduced to inscrutable avatars on the Google Classroom screen. But in their homes across the city’s Southwest Side, the students joined together to perform Tapia’s “noise score,” a meditative series of hand-clapping, mouth-popping and humming she wrote for when “there’s too much silence for you to be comfortable.”

The score was a piece of contemporary art that junior Tapia crafted for a unique virtual exhibit her class created to explore the pandemic’s toll on student mental health and the ways students can deal with it. The exhibit, titled “Self-Care is Self-Love”, is this year’s installment in a partnership between the school district and the Chicago Museum of Contemporary Art, now in its fifth year.

The pandemic’s profound disruption has cast a spotlight on the role of schools in addressing students’ social and emotional needs. Critics have said districts such as Chicago have not traditionally invested enough in counselors and other mental health resources for students — and this moment of turmoil, along with billions in federal stimulus dollars for schools, offers an opportunity to beef up support.

The district last month unveiled a new $24 million initiative to train teachers and support staff to respond to student trauma, though the effort does not involve additional hiring. Curie’s art project points at how schools can also address mental health through curriculum and creativity.

Through the project, students such as Tapia have explored how teens can ease some of the pressures they face. Tapia, for instance, designed her score as an answer to a sense of isolation and eerie quiet that can set in during days home alone, even with the near-constant soundtrack of virtual classes.

But the project has also enabled the students to send a message to educators about how they can help: by taking young people more seriously and giving them more control. In the class, that tactic paid off in an uptick in attendance and participation at the end of the virtual school day.

“The project gave us creative freedom and allowed us to express ourselves,” Tapia said. “Schools need to give students a lot more of that freedom.”

From the get-go, the idea behind the School Partnership for Art and Civic Engagement, or SPACE, project was to allow students to take control and play a key role in designing the curriculum. The initiative began five years ago at Curie, later expanding to Sarah E. Goode and Senn high schools.

“So much is done for students, about students, without their opinion,” Hernandez said. “What does it mean to take back control?”

Students in the class surveyed their peers about their needs, and then created sculptures, drawings and multimedia pieces inspired by the more than 200 responses they received. They also started a conversation with the group Chi Student Pandemic Response about how student activists could advocate for some of those needs, such as more flexibility with grading and attendance.

“Our method is about giving as much power to the students as possible and giving them the tools to exercise that power,” said Xanos, who spearheaded the SPACE project.

This fall, the students, who dub themselves the Guerrilla Art Collective, again got to choose the theme for the project, revisiting the question of young people’s needs during the pandemic. To the teens, the idea of self-care meshed well with the project’s spirit of self-reliance. Some had lost family members to COVID and had seen their neighborhoods swept up in that summer’s civil unrest.

The group discussed self-care as an urgent imperative at this moment of turmoil, but also as a political act of taking a stance against institutions that are not stepping up to provide care.

“It’s more than self-care as an escape and balm for the moment,” said Xanos. “Through that care is empowerment.”

Students explored the concept through different media, including collage, photography, and drawing. But one unfamiliar approach that really resonated was the performance scripts, a contemporary art form that Hernandez introduced to the class. Students ran with the idea and created sophisticated scripts deeply rooted in their own experiences, he said.

Now Xanos kicks off each class by having students perform one of the scripts, which are based on the conflicting ideas of embracing silence and making noise.

“Students have written themselves into the curriculum,” she said. “To see them take on an intense contemporary art concept and run with it was really powerful.”

A chance to breathe

Tapia said working on her scripts taught her the importance of building short breathers into her long, virtual school day. She said she sometimes borrows some of her classmates’ scores to perform between classes.

“We all put mental health and self-care on the back burner; we put our work first,” she said. “ All day, it’s go, go, go for eight hours. Just doing a score during the school day gives you a chance to breathe and relax.”

Tapia’s classmate Jennifer Hernandez says she feels the class instilled a commitment to the self-care that many teens neglect — a conviction that taking care of your mental health is as important as caring for your physical health.

She said the pandemic has tested students immensely, but it has also been a time of growth and reflection. Teens have had to be more self-reliant and accountable for their own learning, and they’ve gotten to at least partly tune out peer pressure, she said.

“We stepped away from trying to please people,” Hernandez said. “We learned more about who we are.”

At a time when some high schools have struggled to consistently engage teens remotely, Hernandez and Xanos said attendance and participation have been high in the class, which comes at the tail end of the virtual school day, when engagement often drops off. Students have attended the class while babysitting or overseeing remote learning for younger siblings, fighting off a COVID infection or working.

Just as a growing number of contemporary artists who are actively involved in presenting their own work, students got to conceive, curate and promote a virtual exhibit, using a program that allows viewers to navigate through a series of galleries displaying the pieces.

One space is dedicated to collage “vision boards” that explore ways in which students felt they could take better care of themselves, from getting more sleep to meditating to spending time in nature to taking time to process the country’s racial reckoning following George Floyd’s death. (“Staring into our computers, it almost looks like we have forgotten about the outside,” one piece reads.)

Another gallery is titled “Earthworks”, that features photos and other pieces that show peaceful spaces the students created with found objects in nature. The exhibit is bookended by the two kinds of self-care performance scores the students crafted: silence and noise. (“You will come across everything from harmonious beats to rattling explosions.”)

Now, Xanos said, students will share their message with their school and the broader community. Xanos and Hernandez pitched the idea of compiling the scores into a virtual “Infinite Care Book”, in which fellow students and community members could add their own self-care instructions over time.

But ultimately, it will be up to students where they take the project next.

“You guys are in the driver’s seat now,” Xanos told students during a recent class. “So we need to ask you: Where do you want to go?”

This article was originally posted on This Chicago school’s response to the student mental health crisis? A full-scale art show