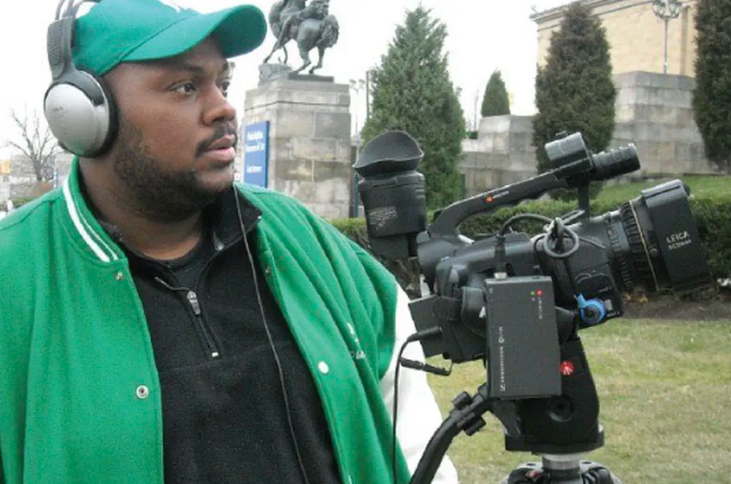 Shannon Newby has loved movies ever since he saw a Godzilla film at the age of two. He is now a film and video production instructor at Philadelphia’s Lincoln High School in the Northeast and recently published the first edition of his “Munch” comic book series.

Newby’s aim is for his students to tap into their creative potential to become movie directors. “In 1982, when I was 9, my father was reading an article in the newspaper about Steven Spielberg,” Newby said. “We talked about it, and I realized that this person Steven Spielberg created ‘ET’ and ‘Raiders of the Lost Ark,’ and I connected the dots that making movies was a job.”

A native of Philadelphia, Newby, 48, attended General Louis Wagner Junior High School, now General Louis Wagner Middle School. When he was in the eighth grade, Newby found a mentor in his language arts teacher, Michael Monterio, who encouraged him and inspired his career in film and video production.

Newby later attended the Philadelphia High School for Creative and Performing Arts before enrolling at Philadelphia Community College. He published the first edition of his space alien invasion comic book “Munch Through Snooby Comics,” a comic book publishing company he founded. Munch follows an alien who crashes down to Earth after an intergalactic battle.

Teaching has been especially challenging for Newby since the pandemic closed schools last year. His class is mostly project-based, and he considers himself a hands-on teacher who thrives on student interaction.

“This is what I love most about teaching,” he said “Reconfiguring all my lessons so they will work virtually, and be engaging, was challenging.”

Newby spoke recently with Chalkbeat about teaching broadcast production during the pandemic, the long “learning curve” good teachers face, and why it’s important to incorporate current events in his virtual lessons.

What do students find fulfilling in your film and production class?

Most of my students have very little or no experience in video production. When I show quality video productions to them in the beginning, it feels foreign to them. Once they become experienced and are able to create videos of a high quality, they are often in awe of their own work. They find fulfillment knowing they were able to grow to that level.

How do you get to know your students remotely?

Quite simply, I talk to them. I try to have several personal interactions with them daily using open-ended questions, but also every couple of weeks I encourage a natural discussion of 15-20 minutes about a topic that I believe matters to them. I have a student with sporadic attendance across all his classes, and who is many missing assignments, who got engaged in a discussion about the COVID-19 vaccine. I was amazed at how well-versed and knowledgeable he was on the subject. At the end of the discussion he said, “If all my classes were more like this, I would come more often.” I told him we do have these discussions on an ongoing basis and you’ll see if you come to class more often. Since then, his attendance has improved and he is regularly turning in more work.

What’s something happening in the community that affects what goes on inside your class?

Anything that the students deem important often finds its way to class. In part because I teach broadcast journalism, if the students collectively are dealing with something that makes them happy or sad, they will bring it to me. When that moment arrives, if it is appropriate, I will give them an outlet to express it in some capacity. When rapper Pop Smoke died, I let the students interview other students about him.

Tell us about a memorable time — good or bad — when contact with a student’s family changed your perspective or approach to teaching.

I had a student in my second year of teaching at West Philadelphia High School who would act out and get into trouble over what seemed to be the silliest things. One day he was out of uniform and refused to take off his hoodie. I came across him having this interaction with the dean in the hallway and I tried to tell him: This is a losing battle; it’s not worth it. But he refused to concede and was suspended. I called his mother about other misbehaviors I had with him in class, and his mother said, “I’m tired of him. I told him he needs to just drop out and do something with his life. He keeps saying he wants to go to school, but he keeps getting in trouble.”

I was flabbergasted. I realized then that there are some parents who did not value the education that we were trying to give their children, and it made it harder for us to help guide these students on a path for success.

A couple years later, I went into a Mcdonald’s and saw this student working there. We had a friendly interaction, and he told me that he did drop out. The irony that I can’t forget is that he was there in full McDonald’s uniform hat and all without objection for a low wage, but wouldn’t wear a shirt and tie in school to prepare him for a possible better working future.

Academic leaders say many of the lessons Black male teachers bring to the classroom go far beyond academic content and pedagogy. Do you agree?

Absolutely. There are things I can say to my students about their life choices and future ambitions that they will take more seriously coming from me as a Black male teacher. I have a shared, similar lived experience with many of my students by also growing up in Philadelphia and going to public schools as a Black male. The students often quickly find a shorthand with me when it comes to discussing life issues, knowing they have someone who can relate to their life.

What was your biggest misconception that you initially brought to teaching?

The learning curve to actually being good at the job was much longer than I expected. I thought I would get comfortable in the job after a couple of months. It took until about April of my first year just to understand what I was really supposed to be doing and about three years before I got to a point of feeling like I was actually doing a good job. All the teaching I did with my after-school and summer programs prior to coming to the district helped, but teaching in the school district is a totally different environment.

Students don’t care how much you know until they know how much you care. It is my teaching philosophy to this day.