Please ensure Javascript is enabled for purposes of website accessibility Too many Michigan teachers want to leave their classrooms. Here’s how to keep them. - THE CHICAGO HERALD Press "Enter" to skip to content

Home » Too many Michigan teachers want to leave their classrooms. Here’s how to keep them. 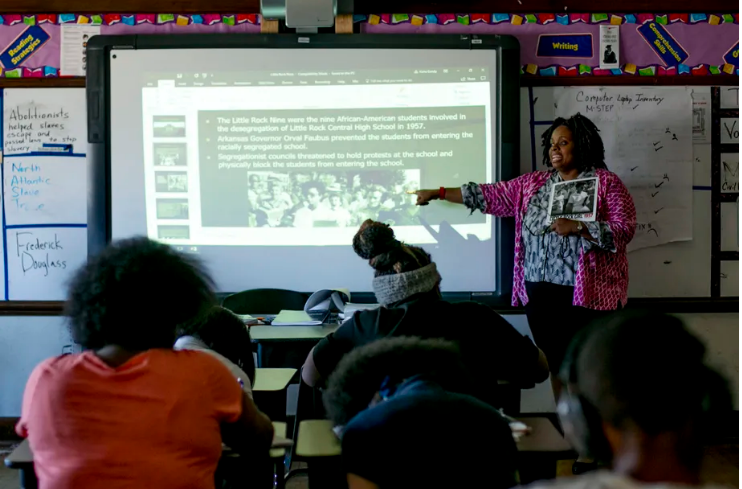 Too many Michigan teachers want to leave their classrooms. Here’s how to keep them.

Michigan has a teacher turnover problem that is limiting the educational opportunities of Black students and those from low-income families.

It doesn’t have to be this way. Teachers are more likely to stay when they have better training, their principals are well-trained, they receive reasonable pay, and their schools can afford to hire enough paraprofessionals, psychologists, and social workers.

When those things are missing, teachers tend to leave, severing relationships and routines that are essential to student learning. Their departures take a steep toll that is borne largely by students in Michigan’s low-income communities, according to a Chalkbeat analysis of state data.

Improving the situation would be expensive, and Michigan’s Republican-controlled legislature has shown little appetite for a major school funding overhaul. But significant new investments in the teacher workforce suddenly seem possible as school districts prepare to spend billions in federal coronavirus aid.

Advocates say that some of the money could be used beginning this year to pay for training and mentorship that make teachers more effective — and more likely to stay.

“We absolutely have the ability now to reduce turnover and create greater retention,” said Adam Zemke, executive director of Launch Michigan, a business consortium that advocates on education issues.

Ask many observers how to reduce teacher turnover, and they will tell you that turnover is merely a symptom of a much larger problem.

The state isn’t investing enough in schools, said Barbara Schneider, a sociologist at the University of Michigan who has studied turnover.

“It’s a resource issue,” she said.

Efforts to reduce turnover in Michigan have often centered on giving teachers more money for their work. When a nonprofit in Detroit pumped millions of dollars into a handful of higher performing charter schools, some of the money went toward retention bonuses. Just last year, the state set aside $5 million for a similar program: New teachers will receive as much as $1,000 for staying on after their first year, with the possibility of receiving more if they stay longer.

But those are small numbers in the context of Michigan’s $15 billion education budget.

By contrast, the amount of money Michigan spends on schools overall has dropped in recent years  — it declined 30%, adjusting for inflation, between 2002 and 2015 as state revenue for schools was reduced by tax cuts.

“Apart from really systematic investment in schools, it’s going to be hard to improve working conditions meaningfully,” said Lucy Sorensen, a professor at the State University of New York Albany who has studied teacher turnover. “To the extent that urban schools are less funded, higher stress work environments serving students with greater needs, that’s more likely to cause teachers to depart.”

Advocates say that billions of dollars in coronavirus aid to Michigan schools presents an opportunity to boost spending on teacher training and mentorship.

School districts have broad discretion to spend the money, including by “hiring additional educators to address learning loss, (and) providing support to students and existing staff,” according to the U.S. Education Department.

Ongoing training, mentorship, and coaching are key to supporting staff, Zemke said. Launch Michigan surveyed 17,000 Michigan teachers in 2019 and found a widespread sense that they aren’t given the same training opportunities as members of other U.S. professions, such as doctors, lawyers, and veterinarians.

Several efforts across the state aim to expand teacher training and mentorship. In Detroit, an innovative school is modeled on the residency training system used by medical doctors in which trainees receive support from mentors and from more experienced peers over three years. In Battle Creek, a philanthropic initiative pairs veteran teachers with novices for regular classroom visits and consultations about teaching technique.

Expanding and supporting programs like that one — and teacher training in general — would go a long way toward improving retention, said Elizabeth Moje, dean of the College of Education at the University of Michigan, who was pivotal in the creation of the residency school in Detroit.

While districts have only a few years to spend the federal aid, Moje said the benefits of high-quality training would last far longer.

“What better way to use the money than to actually develop the best teachers?” she said. “If we spend it on a text or a learning tool, that might need to be replaced in a few years. Actively developing our teachers to feel really good about their work, that’s something that goes on and on and on.”

Principals need training and support too, and research shows that effective principals play a crucial role in retaining teachers.

The Detroit Children’s Fund, a nonprofit that is investing tens of millions of dollars in Detroit to improve schools, has already paid for principal training programs across Detroit.

But principals don’t generally get that kind of support, said Nicole Simon, a researcher affiliated with the Project on the Next Generation of Teachers, an initiative at Harvard University.

“We know that for teachers one of the most important factors in keeping them in their schools is strong leadership. And we have not invested in that kind of leadership. We don’t teach people how to do it, we don’t support them while they’re doing it.”

That doesn’t mean there’s nothing schools can do in the absence of major new funding, she said, pointing out that turnover varies widely even among schools that receive similar funding and serve similar students. Detroit, for instance, was home to 76 schools with high turnover rates of 30% or more in 2018-19. But the city is also home to more than 40 schools with turnover rates below 16%, the most recent available national average.

“People in the education field have not done enough of the simple task of asking teachers what they need and what the difficulties are in their everyday jobs,” she added.

Positive communication can be as simple as simply asking teachers to stay, said Punita Thurman, vice president of program and strategy for the Skillman Foundation, which funded several charter high schools in Detroit.

A principal at one of those schools experimented with periodically telling teachers that their presence at the school was valuable and that she hoped they would stay.

“It was a small gesture, but she was blown away at how much of a difference it made,” Thurman recalled.

Simply asking teachers for input is the not-so-secret recipe behind Upbeat, a company  that aims to help districts reduce teacher turnover by getting teachers and school leaders on the same page. Upbeat surveys teachers anonymously to identify their frustrations, then shares the results with administrators.

“If teachers are involved in shaping the rules and procedures that govern their work days, they’re more likely to buy in,” said Henry Wellington, CEO of Upbeat, a company that consults with school districts about reducing teacher turnover. “If their performance evaluations are considered fair, they feel more successful. And we know that when teachers feel more successful they’re more likely to stay.”

This article was originally posted on Too many Michigan teachers want to leave their classrooms. Here’s how to keep them.