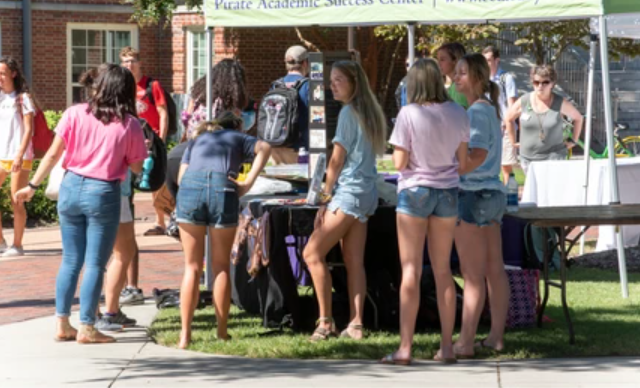 RealClearEducation has published a national opinion survey of students belonging to Greek-letter organizations, encompassing 4,620 students at 534 colleges and universities.

Through a series of questions, we asked students whether they feel free to speak and express themselves in front of professors and their peers. We also asked them whether voluntary student organizations, including fraternities and sororities, are treated fairly and allowed to operate freely on campus. The results of the survey show that alongside the widely publicized controversies over freedom of speech on campus, there is a parallel conflict involving freedom of association. Many students don’t feel confident that their right to form or operate voluntary student organizations on campus is adequately protected.

Whenever students form groups based on shared interests or beliefs, there is clearly a potential that they may end up at odds with others on campus who don’t share those same interests or beliefs. Therefore, student organizations of various kinds can find themselves in the crosshairs of zealous campus administrators, who understandably want to foster an inclusive environment on campus but often achieve the exact opposite effect.

Nearly 10 years ago, Vanderbilt University instituted a non-discrimination policy that prohibited any officially recognized Christian student organizations on campus from requiring that their leaders actually hold Christian beliefs. It was clearly within Vanderbilt’s constitutional rights to ban groups that required leaders to profess the Christian faith. As a private university, Vanderbilt isn’t subject to the same First Amendment rules as a public university. But, as my mother might put it: Just because you have a right, that doesn’t make you right.

Vanderbilt leaders’ notion of non-discrimination was ultimately self-contradictory. Their definition of inclusivity led to the explicit exclusion of several voluntary student groups. Their non-discrimination policy was itself discriminatory (albeit legally so).

The tension between these inherently self-contradictory conceptions of inclusivity and the right of voluntary student groups to form and function has grown in recent years. Nowadays, the primary concern is often gender identity. The right of single-sex organizations to exist on campus has come under greater scrutiny, alongside a growing debate over the participation of transgender athletes in women’s sports.

In 2016, Harvard University instituted a policy that barred any student belonging to a single-sex organization from holding leadership positions in campus groups or sports teams. And Harvard refused to endorse any such student for post-graduate fellowships, such as the Marshall or Rhodes scholarships. The policy was nearly as effective as an outright ban. And women were the hardest hit. Almost immediately, all female-only organizations at Harvard, including sororities, folded or ceased to exist.

Harvard’s reasoning mirrored the reasoning behind Vanderbilt’s actions five years before. And it had the same self-contradictory effect, particularly for women’s groups. But in this instance, the legal system was not on Harvard’s side. Fraternity and sorority groups sued the university in 2018, alleging sex discrimination and violation of Title IX laws, which forbid federal funding for any organization that discriminates on the basis of sex.

Harvard, which receives no small amount of federal funding, backed down and reversed its policy on single-sex organizations in 2020 after it became clear that the university was going to lose the federal lawsuit. Wesleyan University lost a similar lawsuit after it attempted to force its fraternities to go co-ed. Nevertheless, as gender identity has become a greater focus within our politics and culture, many who belong to single-sex organizations feel like they have a target on their backs. Nine percent of the students in our survey disagree with the statement “There is no pressure on my campus for fraternities and sororities to become co-ed.” And more than a third say their campus applies “special regulations or restrictions” to single-sex organizations, such as fraternities and sororities, that are not applied to other organizations.

On the positive side, a large majority of our survey respondents (84%) say students on their campuses do have access to student groups and organizations that reflect their “beliefs, identities, and interests.” And most students (72%) agreed with the statement, “Student organizations on my campus are free to determine their own membership, values, and mission without interference from the administration or other students.” Unfortunately, that was not the case for everyone. More than one-in-five (22%) say student organizations are not free to determine their own membership without interference.

When it comes to the issue of speech and expression on campus, media coverage and public debate tend to focus on personal freedoms – professors who were fired or punished for controversial views or students who say they don’t feel free to speak openly on campus. Our latest survey confirms those problems but sheds light on an issue of equal importance – freedom of association.

To encourage the free exchange of ideas and healthy debate in the classroom, a university must be a forum for the broadest possible range of ideas. And to truly and meaningfully be such a forum, it must allow students to form voluntary groups on the basis of their ideas, beliefs, or identities. To do less would mean a university has chosen to define inclusivity and diversity in a way that diminishes both.